German Aerospace Center researchers have been instrumental in the preparation of a report on the changes in the Ozone Layer for the World Meteorological Organization (WMO). The report was published online by the Geneva-based WMO in January. Recent estimates suggest that, by the middle of the 21st century, the thickness of Ozone Layer will be the same as in the early 1980s.

"This positive development is due to the successful regulation of the production and use of substances containing fluoride, chlorine and bromine – for example, chlorofluorocarbons (CFCs) – through the Montreal Protocol of 1987 and subsequent international agreements," explained Martin Dameris from the DLR Institute of Atmospheric Physics. This process has demonstrated the positive results that can come about when scientific findings lead to political action.

According to the WMO report, we can expect climate change to actually accelerate the restoration of the Ozone Layer. The hole in the Ozone Layer over Antarctica will have largely closed by mid-century. In some regions, there may even be instances of 'over-recovery': this means that once the CFCs have completely degraded, ozone concentrations will actually be higher than they were before the Ozone Hole first appeared in the early 1980s.

All the predictions in the ozone report are based on computational models that simulate physical, dynamic and chemical processes in the atmosphere. Referred to as 'climate chemistry models', these were produced at the DLR Institute of Atmospheric Physics (Institut fur Physik der Atmosphare), among other places. The main focus was to study the influence of climate change on the chemistry of the atmosphere in general, and on the Ozone Layer in particular.

To investigate the Ozone Layer, the DLR institute conducted long-term simulations, starting in the past (for example, in 1960) and extending into the distant future. The computational results for the past are compared against observation data to evaluate the quality of the models, among other things.

This image shows the Ozone Hole over the south polar region from 1 to 3 October 2010, with ozone figures substantially below 150 dobson units. The Ozone Hole extends across most of Antarctica. Credit: DLR." > 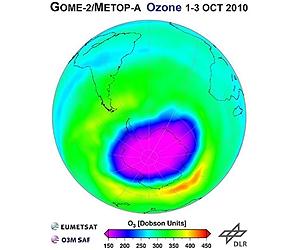 Delivering reliable estimates relating to future developments, such as those that might affect the Ozone Layer, is only possible on the basis of thoroughly tested models. To gain an understanding of atmospheric processes, atmosphere researchers use data from the DLR Remote Sensing Technology Institute (Institut fur Methodik der Fernerkundung; IMF).

Researchers at this Institute are heavily involved in supplying data products derived from satellite-supported measurements. To obtain the highest accuracy possible, these satellite data products are compared against other independent data. This process culminates in high-value, quality-tested data that scientists can work with.

The World Meteorological Organization (WMO) is a specialised agency of the United Nations. It focusses on the state and behaviour of Earth's atmosphere; its interaction with the oceans, the resultant climate and the consequent distribution of water resources following that.

Since the discovery of the hole in the Ozone Layer in 1985, every four years, the WMO publishes reports on the state of the Ozone Layer in the stratosphere – the second layer of Earth's atmosphere, located at an altitude of 10 to 50 kilometres. (TerraDaily)