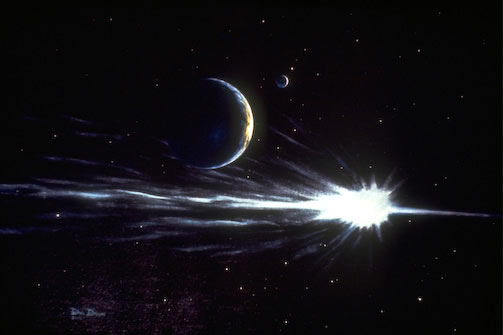 Note prior to reading: This is a two weeks old blog post that I just today came across and realized it had few things worth remembering and discussing here. I invite you all to read this blog post by Laura Knight Jadczyk and leave us your comments and thoughts, especially ones on Black Death, low fat diet and anti smoking campaigns.

We had a chat with the Cassiopaeans the other night and got in a few questions about Comet Elenin, to wit:

Q: (Andromeda) Is the outburst of asteroid 596 Scheila related at all to Comet Elenin?

A: Yes. And other bodies. See McCanney.

Q: (Andromeda) So what caused that asteroid to become a comet?

A: It became electrified!

In case you don't know, 596 Scheila is an asteroid that suddenly began behaving like a comet this past December. See HERE for some nice images.

As I've mentioned before, James McCanney's Plasma Theory of Comets is quite interesting and deserves some consideration. I understand from a few people who have written to me about it that McCanney isn't the only one approaching the problem from this direction: there is also Wallace Thornhill and David Talbot, but I haven't yet had time to explore what they are saying.

Anyway, in respect of the above remarks by the Cassiopaeans regarding McCanney's theories vis a vis 596 Schiela, my astronomer friend made the following comment to me in a private communication:

The activity of Scheila started roughly at the same time as the storm on Saturn. Can it be because of an alignment Saturn-Elenin-a few belt asteroids-Scheila?

He included a graphic showing the alignment: 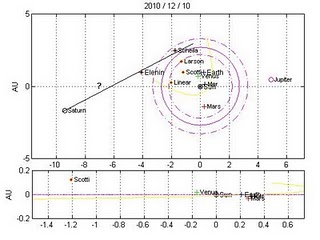 Now, the Storm on Saturn is an interesting thing. From Spaceweather:

February 8, 2011 – STORM ON SATURN: A vast thunderstorm that erupted on Saturn during the closing weeks of 2010 is still going strong. “It looks like a comet plowing through Saturn’s northern hemisphere,” reports amateur astronomer Christopher Go. He took these pictures on Feb. 5th using an 11-inch Celestron telescope in Cebu City, the Philippines. “The storm is very bright,” says Go. “I spent a few minutes observing it visually (through the eyepiece) and it is very prominent.” Researchers call the storm the “northern electrostatic disturbance” because (1) it is in Saturn’s northern hemisphere and (2) it is strongly charged with lightning. Receivers onboard NASA’s Cassini spacecraft are picking up radio crackles each time a bolt discharges–much like the static you hear on a car radio when driving through an electrical storm on Earth. 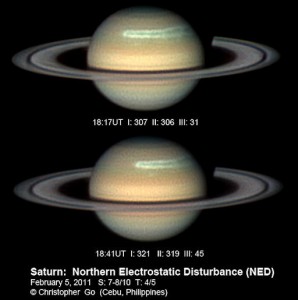 As mentioned, this storm on Saturn started at about the same time as 596 Scheila began to act like a comet and you can note the alignment in the graphic above.

One of the Cass Forum members, axj , noted:

Quite interesting symbology to Comet Elenin's name as well:

ELEven NINe, or even more striking when read backwards: NINELEven

And according to NASA, Comet Elenin will have its closest approach to the sun on… September 10, 2011 – which is also a NINE ELEVEN if you look at the year as 11 and month as 9. (JPL website for orbit data)

Now, what does all this mean? As it happens, there were other questions asked about Comet Elenin in that session that may be rather concerning especially in light of the recent superstorms on planet Earth, and possible future storms, not to mention the fact that we may spend some time in the tail of Comet Elenin towards the end of the year.

Q: (L) Next question. (Andromeda) Will Comet Elenin interact with and cause a major disruption of earth this year?

Q: (Perceval) It's probably not possible to know exactly when. (L) Yeah, I think it depends on the conditions of the planet and so many other variables. It hasn't even gone through the asteroid belt yet. That traversal… The asteroid belt is between Jupiter and Mars, and it won't go through that until March and April….

A: Elenin is already taking its toll.

A: 500km diameter along the long axis.

Q: (Perceval) At least it's not Venus…

A: It is growing.

Q: (L) Anything else about it?

A: And that is only the core.

Q: (Psyche) Yeah, and the tail… (Andromeda) Anything else on Elenin? (Perceval) We'll have to wait and see? (Psyche) {Considering the research we have recently done on comet borne pathogens and their possible relationship to the destruction of more than half of humanity during the Dark Ages which have now been identified as periods of cometary bombardment}, are we going to see a return of the Black Death?

A: Those that have a certain genetic profile may suffer very little.

Q: (Andromeda) Is that any of us? (Galaxia) That doesn't sound like anybody is immune… like, "They'll suffer very little before they die!"

A: Smoking tobacco is a clue and an aid.

Q: (L) A clue to the genetic profile?

Q: (Psyche) Oh, interesting. (Psyche) Everybody lights up! I feel like smoking! (laughter)

A: It is not just aliens that don't like to eat people that smoke! But from a certain perspective the viruses that cause such illnesses as the Black Death are "alien".

Q: (Psyche) You should read the article in the next issue of The Dot Connector magazine: "New Light on the Black Death: The Viral and Cosmic Connection". (L) If you look at it from a 4th density perspective, when something like the Black Death comes and there is global suffering – and when you read about it, the Black Death is just horrible – but if there was such suffering on our planet from something like that, 4D STS would be getting a rich feast of suffering which is what they feed on. So, an alien virus would be interactive with 4D reality by providing its food.

Q: (Andromeda) When will this start? (Atriedes) That's kind of a prediction… (laughter) (Galaxia) Soon, or long term?

Q: (L) In other words, if Elenin or something else has something like that in its tail, and the earth goes through the tail, it can still take a year or so for it to precipitate onto the earth?

Q: (Galaxia) Will colloidal silver help us fight the plague?

A: Not alone, but very helpful.

Q: (Galaxia) Will our dietary changes help us fight it off?

And so, we begin to understand more of the Evil Plotting going on behind the scenes by the PTB, the efforts to destroy human health by advocating low fat diets and trying to stamp out tobacco smoking!

As always, this is just speculative, but the Cs do have a darn good track record!