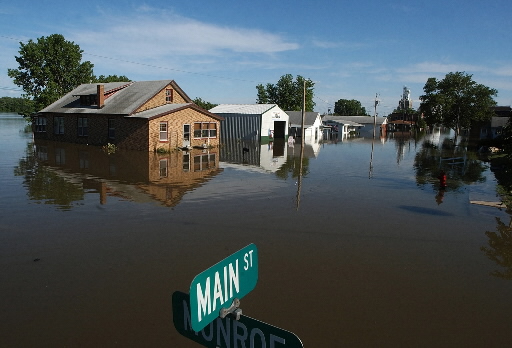 Millions of people in the Midwest are at risk from major flooding this spring, according to a forecast being released Friday by the National Weather Service.

A huge part of the north-central USA, including the cities of Minneapolis-St. Paul, St. Louis, Sioux Falls, S.D.; and Fargo and Grand Forks, N.D., could see "significant" flooding.

"Excessive precipitation, mainly in the form of snow, coupled with continuously frigid temperatures, has yielded a thick snowpack in much of the upper Midwest," says Lynn Maximuk, central region director of the National Weather Service in Kansas City, Mo. "We expect significant flooding when this snow begins to melt."

Forecasters say the flooding could start as early as mid-March and last well into April.

For the third straight year, experts are warning of "moderate" to "major" flooding along the Red River of the North, which would again swamp the flood-plagued city of Fargo, N.D., and its neighbor across the river, Moorhead, Minn. 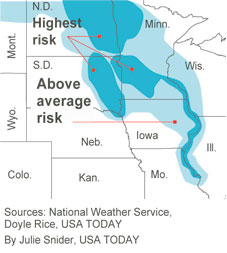 Fargo has received almost 5 feet of snow this winter — nearly 2 feet above its average for an entire winter season, the weather service reported. That comes on top of summer and fall rain that was 50% above average.

Forecasts for much of the region continue to call for a cold and snowy remainder of February, which will cause the snowpack to grow. In March and April, as temperatures rise and the snow melts, frozen ground and saturated soil will enhance runoff, causing streams and rivers to swell.

So, with floods in three straight years and four of the last six across the region, what's going on?

"Part of the problem is that it's been so wet for several years," says weather service hydrologist Noreen Schwein. "The moisture in the soil going into the fall has been wetter every year. There hasn't been a good chance to dry out."

In northeastern North Dakota, near Devils Lake, Schwein said there has been a decades-long trend of unusually wet weather that has lasted since 1990.

Some of the spring forecast lowlights include:

•St. Paul has about a 95% chance of exceeding major flood stage of 17 feet.

•Grand Forks, N.D., has a greater than 95% chance of exceeding major flood stage of 46 feet.

•Devils Lake at Minnewaukan, N.D., has about a 40% chance of exceeding 1,455 feet, which could partially inundate portions of the town.

The weather service will release an updated national spring flood outlook on March 17.