The death toll from destructive floods affecting Pakistan since June 14, 2022, rose to 1 162 on August 31, the National Disaster Management Authority (NDMA) reports. During the same period, more than 3 500 people were injured, 33 million were affected, and more than 1 million homes were damaged or destroyed. Officials said this year’s monsoon season brought more than one-third of the country underwater and described the floods as one of the worst in history. 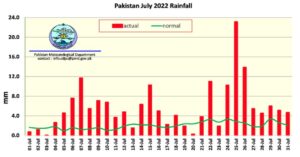 Since the monsoon rains started in mid-June, heavy rains and ensuing flooding have killed at least 502 people and destroyed thousands of houses throughout Pakistan.

A glacial lake outburst flood (GLOF) from the Shishaper Glacier in Pakistan swept away the Hassanabad Bridge in Hunza on the Karakoram Highway linking Pakistan and China. The event took place on Saturday, May 7, 2022.

Three days of heavy rainfall in northern Pakistan caused severe flash flooding in parts of the capital Islamabad and surrounding areas on July 28, 2021, leaving at least 2 people dead. The heaviest rains fell from 05:00 to 06:30 PST. In just a few hours, Saidpur…

Record rainfall and resulting floods in Pakistan's Sindh Province have affected nearly 2.5 million people and over 405 000 ha (1 million acres) of crops since the start of the rainy season. In total, 15 000 villages were inundated, more than 77 000 homes…

At least 23 people were killed in weather-related incidents in Karachi, Pakistan, on August 27, 2020, as intense monsoon rains continued to batter parts of the country. Up to 223.5 mm (8.7 inches) of rain fell in just 12 hours on Thursday alone, marking the…

At least seven people lost their lives while scores of others were injured in separate incidents in Pakistan's southern city Karachi in the first seasonal monsoon downpour on Monday, July 6, 2020. The Pakistan Meteorological Department (PMD) reported 43 mm (1.7…