Category 5 Super Typhoon "Chanthu" — known as Kiko in the Philippines — is forecast to pass over extreme Northern Luzon, Philippines on September 10, 2021, and then turn toward Taiwan where landfall is expected on September 12.

"Chanthu has maintained its compact structure while completing another intensification period under highly favorable conditions. However, as it continues to move northwest, it is expected to lose the radial outflow that accelerated its development earlier. Therefore, significant intensification is unlikely within the next 24 hours despite low vertical wind shear and warm sea surface temperatures in the Luzon Strait."

Landfall in Taiwan is expected around 09:00 UTC on September 12, JTWC forecasters said.

After passing through Taiwan, increasing vertical wind shear will reduce the system to 100 km/h (65 mph) by 09:00 UTC on September 15. 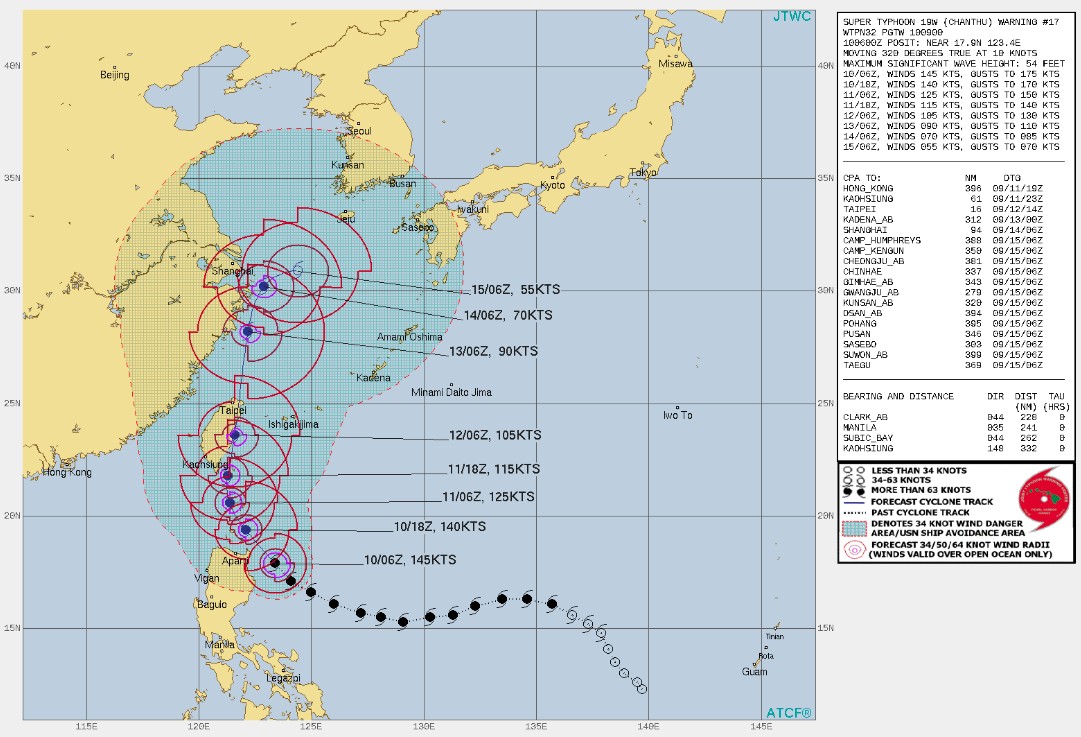 "Numerical models are in overall tight agreement, with consensus moving slightly to the east of Taiwan, reducing land interaction effects. After passing by Taiwan, track guidance spreads out to 440 km (270 miles) by September 13," JTWC said.

TCWS No.3 is in effect for the extreme northeastern portion of Cagayan (Santa Ana, Gonzaga), the rest of the Babuyan Islands, and the rest of Batanes. 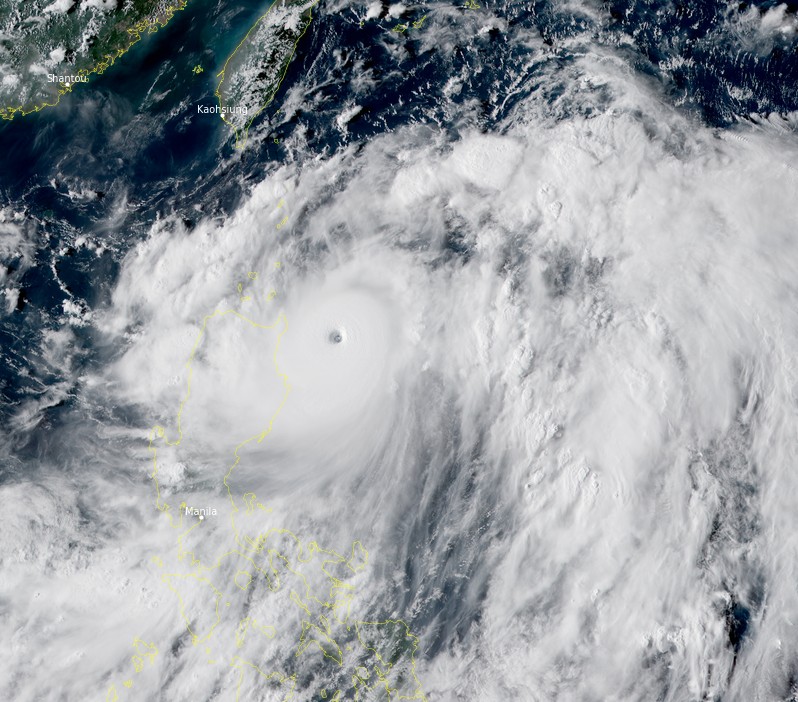 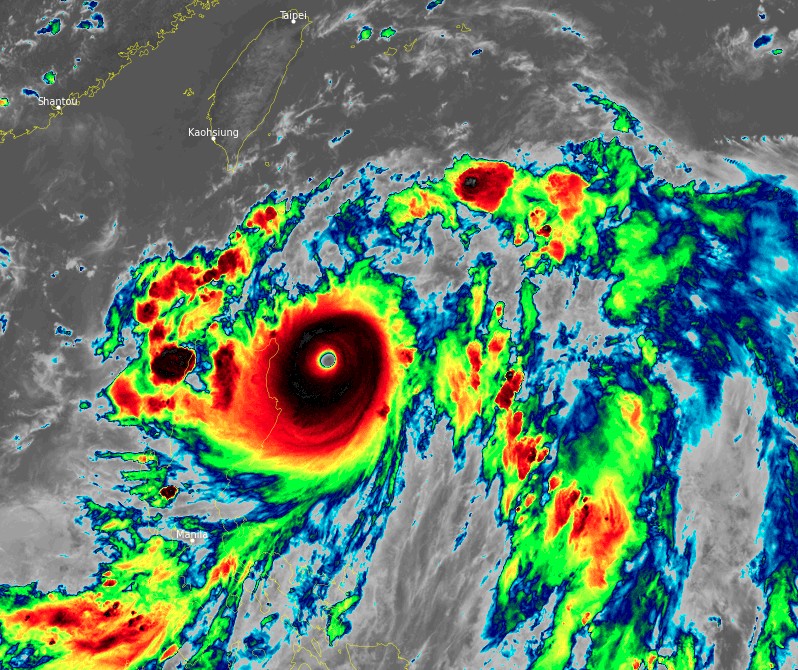 Heavy to intense with at times torrential rains over the northeastern portion of Cagayan including the Babuyan Islands and Batanes are expected tonight through tomorrow evening (LT). Moderate to heavy with at times intense rains are expected over northern and central Aurora, northern Isabela, the rest of Cagayan, Ilocos Region, Cordillera Administrative Region, and the rest of Cagayan Valley.

Under these conditions, scattered to widespread flooding (including flash floods) and rain-induced landslides are possible especially in areas that are highly or very highly susceptible to these hazards as identified in hazard maps.

In addition, the typhoon will continue to enhance the Southwest Monsoon, bringing monsoon rains over the western section of Southern Luzon and Western Visayas in the next 24 hours.

Winds may reach typhoon-force strength between 170 and 220 km/h (105 – 135 mph) in strength within any of the areas where Tropical Cyclone Wind Signal (TCWS) #4 is hoisted during the passage of the typhoon. This may cause generally heavy to very heavy damage to structures and vegetation.

Winds may reach typhoon-force strength of up to 170 km/h (105 mph) in strength within any of the areas where TCWS #3 is hoisted during the passage of the typhoon. This may cause generally moderate to heavy damage to structures and vegetation.

Winds may reach gale to storm force strength within any of the areas where TCWS #2 is in effect. This may result to light to moderate damage to structures and vegetation.

Winds reaching strong breeze to near gale strength (i.e., strong winds) will be felt within any of the areas where TCWS #1 is in effect. This may result in very light damage to structures and vegetation.

TCWS #5 may be hoisted over some municipalities of Batanes and Babuyan Islands, PAGASA said.

A moderate risk of storm surge reaching 1 to 2 m (3.3 – 6.6 feet) in height may occur in the next 24 hours. Rising seawater along with the high waves from the shoreline moving inland may cause flooding in the low-lying coastal localities of Batanes, Cagayan including the Babuyan Islands, and Isabela.

In the next 24 hours, rough to phenomenal seas (3 – 16 m / 10 – 52 feet) will be experienced over the seaboards of areas where TCWS is in effect. Sea travel is risky for all types of sea vessels and mariners are advised to remain in port or take shelter in port until winds and waves subside.

Moderate to rough seas (1.2 – 3 m / 4 – 10 feet) will be experienced over the eastern seaboards of Central and Southern Luzon. Sea travel is risky for those using small seacrafts. Mariners are advised to take precautionary measures when venturing out to sea and, if possible, avoid navigating in these conditions. 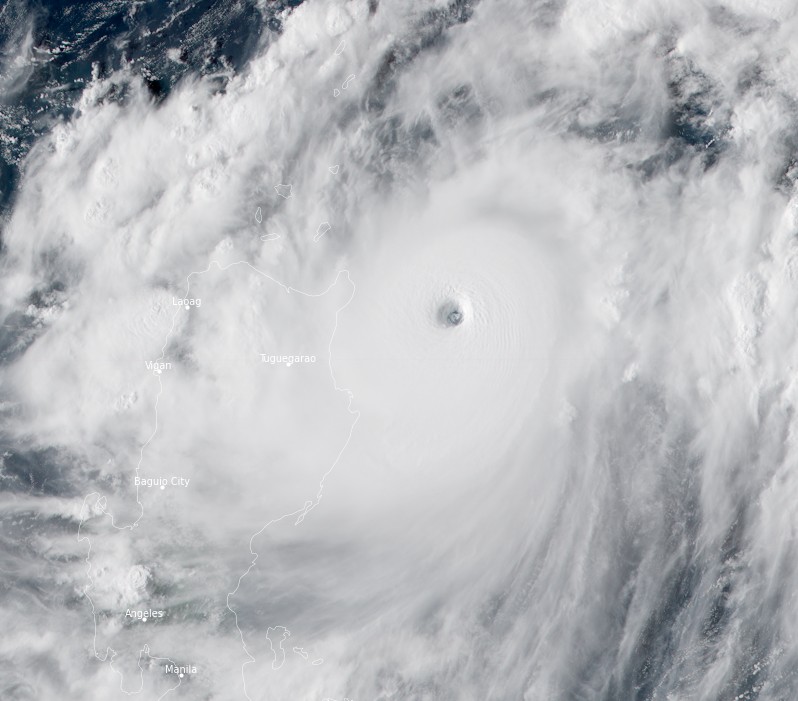 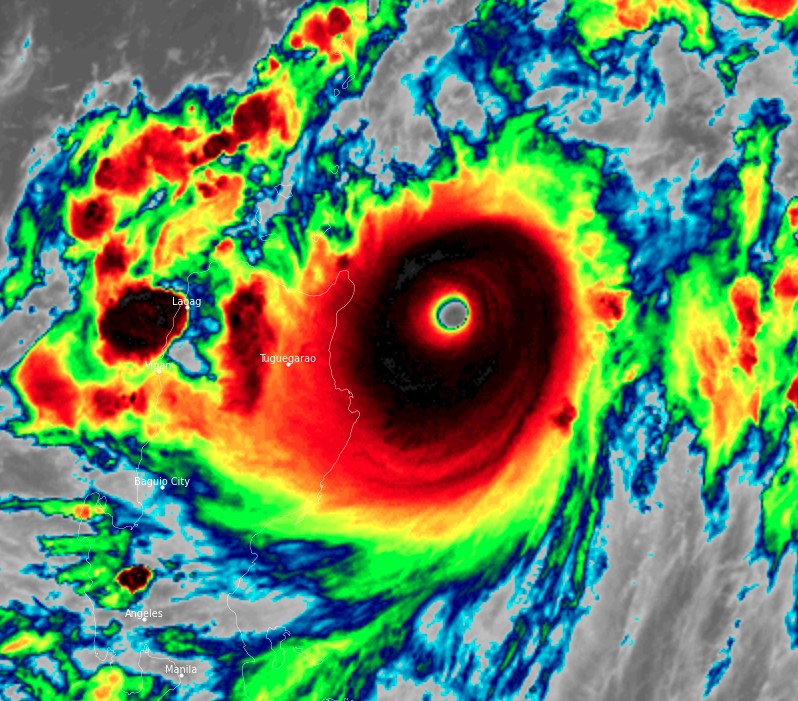 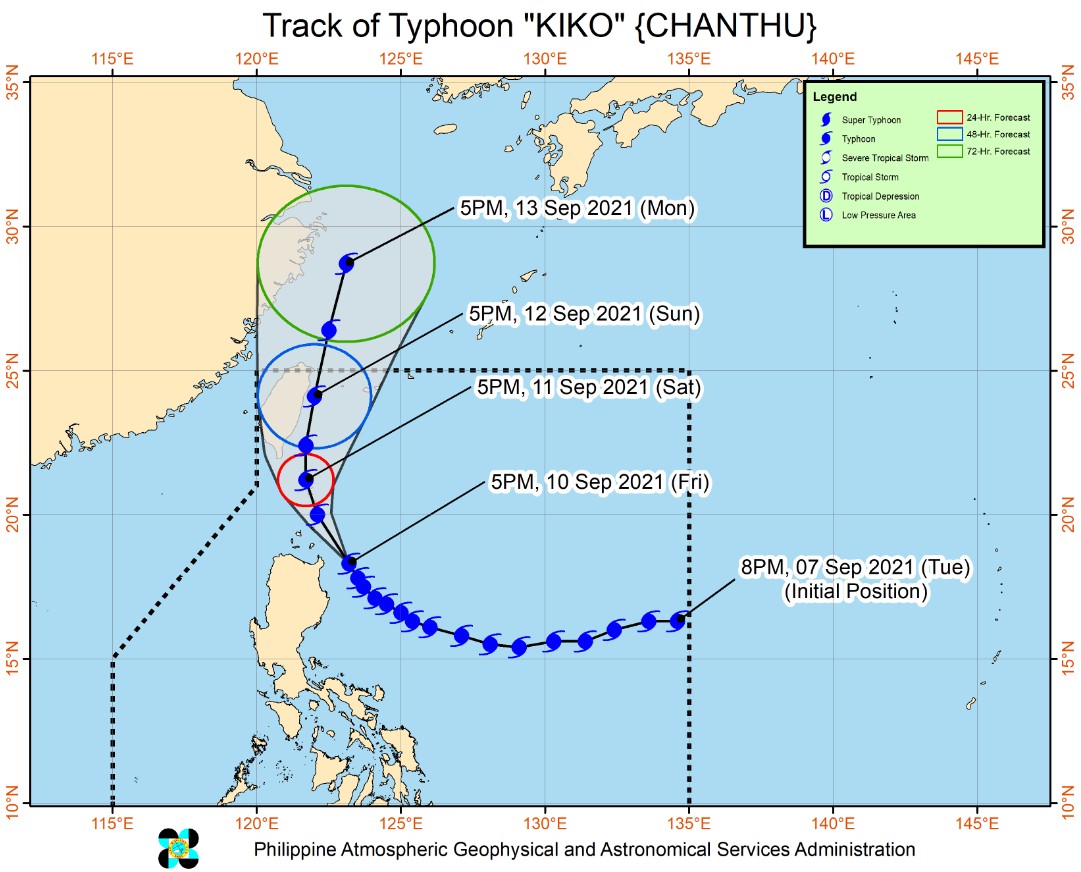 "On the forecast track, the typhoon is forecast to pass over the coastal waters of Babuyan Islands and cross the vicinity of Batanes tonight through tomorrow afternoon (LT)."

"After passing in the vicinity of extreme Northern Luzon, the typhoon is forecast to move northward for the remainder of tomorrow through Sunday afternoon (LT) and may pass within the coastal waters of Taiwan."