A major, late-season winter storm is poised to bring heavy snow and blizzard conditions to parts of the central Rockies to the north-central High Plains today, March 14, 2021. The storm is expected to severely impact parts of Colorado, Wyoming, Nebraska and South Dakota over the weekend, with NWS Cheyenne warning the snowfall totals currently forecast are absolutely historic.

A low pressure system continues to intensify as it expands its impact with multiple forms of hazardous weather across the central portion of the country this Sunday morning, March 14, NWS forecaster Kong said.

Moisture from the Gulf of Mexico has been lifted ahead of a dynamic cold front which continues to trigger frequent bouts of severe thunderstorms across the southern Plains.

Farther north, heavy rain with embedded thunderstorms are expanding across the central Plains ahead of a warm front associated with the intensifying low pressure system.

Meanwhile, a major winter storm is currently in progress across the central Rockies and nearby High Plains on the backside of the storm system.

Heavy snow and increasing winds are expected to bring blizzard conditions from parts of the central Rockies to the north-central High Plains today, with an additional 60 to 90 cm (2 to 3 feet) of snow possible along the Front Range of Wyoming and Colorado while 30 to 60 cm (1 to 2 feet) could be quite common across the nearby High Plains to southwestern South Dakota. 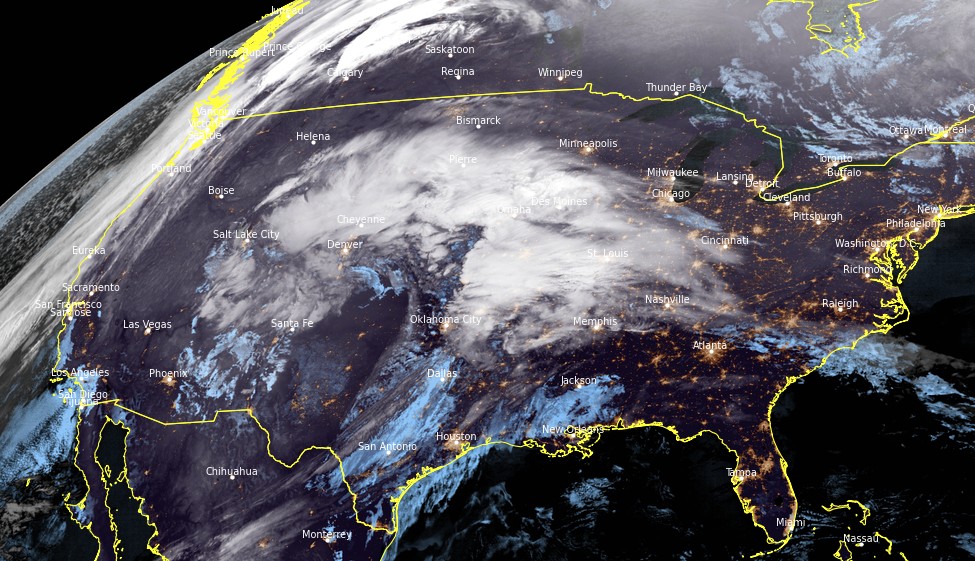 Blizzard Warnings, Winter Storm Advisories, and Warnings continue to be in effect from the central Rockies to the north-central High Plains to the Black Hills of South Dakota. 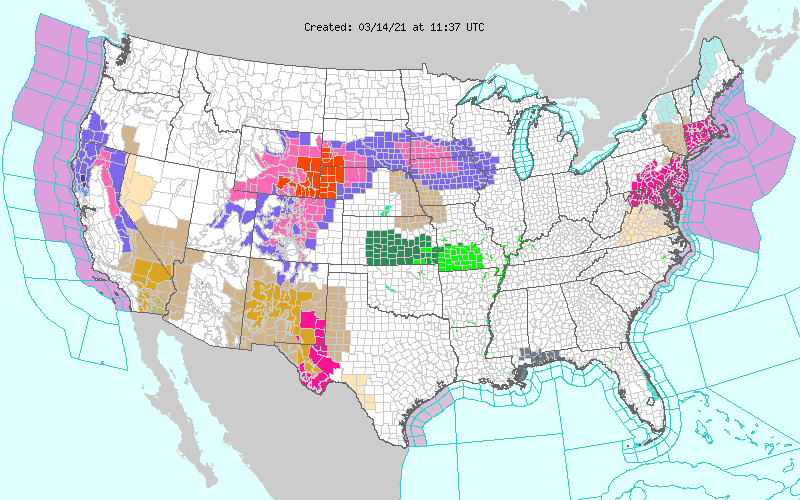 The storm should reach peak intensity later today as it begins to wobble eastward into the central Plains on Monday, and will begin to weaken.

But in the meantime, strong to severe thunderstorms are forecast to shift eastward across the southern Plains today, reaching the Mississippi Valley on Monday before losing intensity as they reach the interior Southeast early on Tuesday.

As the weakening storm pulls eastward, there will likely be a swath of freezing rain and mixed precipitation moving through parts of the Midwest and Ohio Valley, reaching the central Appalachians Tuesday morning.

In addition, dry and strong downslope winds to the south of the storm are expected to promote elevated to critical fire danger across parts of the southern High Plains.