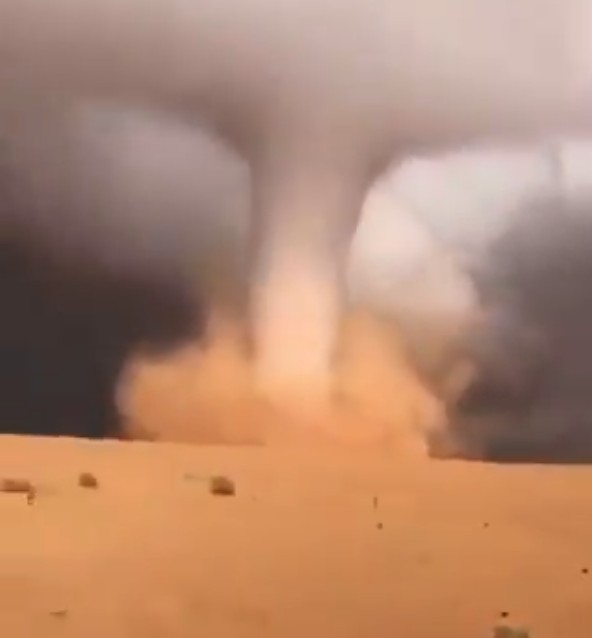 A massive tornado formed on the outskirts of Sakaka in Al Jawf, Saudi Arabia, on Saturday, December 5, 2020. Meteorologists said it was unusually big for the region and one of the largest tornadoes ever documented in the country.

The incredible tornado occurred in the middle of the desert and reached an uninhabited area, according to Metsul Meteorologia.

The meteorological authority added that among the affected regions wereTabuk, Hail, Al-Qassim, and parts of Madinah, Riyadh. Wind speeds were between 16 and 40 km/h (10 and 25 mph), while waves on the Red Sea reached up to 2 m (6.5 feet).

The tornado was unusually large for the region, according to local reports. It covered a small territory and moved very slowly. No injuries were reported, but authorities advised residents to stay indoors as the region is experiencing unpredictable weather conditions.

Abdullah Al-Misnad, professor of Climate Change and Department of Geography at the University of Casim, noted that it was one of the biggest tornadoes ever recorded in the region.

"The tornado, which formed southeast of Al-Jawf is one of the largest hurricanes that has been documented with pictures in Saudi Arabia," Al-Misnad stated.