Kick 'em Jenny submarine volcano is showing signs of increased unrest. The latest activity was observed from June 5 to 12, 2020, with more than 1 300 earthquakes. Although the alert level remains at Yellow (2 of 4), authorities urge marine operators to be vigilant when traversing the area.

The National Disaster Management Agency (NaDMA) of St. Vincent and the Grenadines reminds the public to strictly observe an exclusion zone of 1.5 km (1 mile) from the summit of the volcano, located 8 km (5 miles) north of Grenada at about 200 m (650 feet) beneath the surface of the sea.

Increased seismic activity at this volcano results in the emission of gases and reduced density of the water around the summit, but there is currently no tsunami threat for St. Vincent and the Grenadines or the region, the National Emergency Management Organization (NEMO) said. 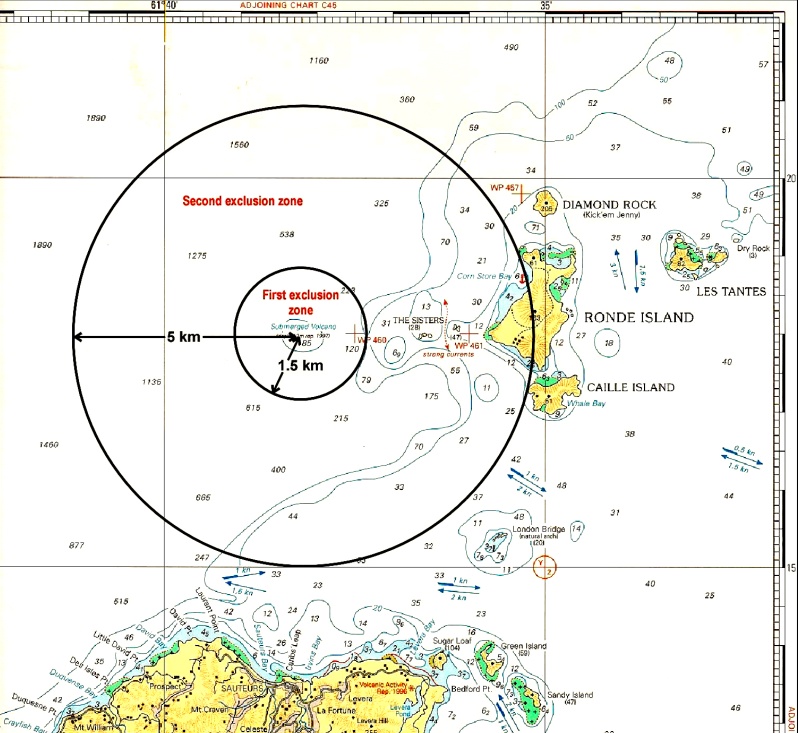 From June 5 through 12, the University of West Indies – Seismic Research Center (UWI SRC) recorded 1 384 low magnitude volcanic earthquakes, with the strongest being M1.8.

High-level volcanic earthquakes persisted for about 78 hours, then abruptly subsided and decayed to background levels.

Activities have since reduced, but there is continuous monitoring of the volcano which remains at the Yellow Level Alert — the volcano is restless: seismicity and/or fumarolic activity are above the historical level or other unusual activity has been observed or can be expected without warning.

Kick 'em Jenny, a historically active submarine volcano 8 km (5 miles) off the north shore of Grenada, rises 1 300 m (0.8 miles) from the seafloor. Recent bathymetric surveys have shown evidence for a major arcuate collapse structure that was the source of a submarine debris avalanche that traveled more than 15 km (9.3 miles) to the west.

Numerous historical eruptions, mostly documented by acoustic signals, have occurred at Kick 'em Jenny since 1939, when an eruption cloud rose 275 m (902 feet) above the sea surface.

Prior to the 1939 eruption, which was witnessed by a large number of people in northern Grenada, there had been no written mention of Kick 'em Jenny. Eruptions have involved both explosive activity and the quiet extrusion of lava flows and lava domes in the summit crater; deep rumbling noises have sometimes been heard onshore.

Historical eruptions have modified the morphology of the summit crater. (GVP)