The National Emergency Management Organization (NEMO) of St. Vincent and the Grenadines is advising the public of flooding and landslides in several areas on mainland St. Vincent as a result of heavy rainfall. The area has seen powerful volcanic eruptions and extremely heavy ashfall since April 9, 2021. The Met Office is urging residents to be alert for possible impacts resulting from rain-soaked ash. In addition, residents especially in the Yellow, Orange and Red Zones should avoid areas within the vicinity of rivers due to destructive lahars.

The Red Zone can be impacted by mudflows as ash deposits are thickest in these areas and the absence of trees means that all of the material will find its way down the valleys. There are also several reports of flooding and landslides in and around Kingstown and its surroundings as well as in other areas prone to landslides and flooding.

The public is asked to exercise caution especially persons living near rivers and streams and in areas prone to landslides as floodwaters are dangerous and can result in loss of lives and property.

Traffic was brought to a standstill around the capital Kingstown on April 29 after landslides blocked roads on the outskirts of the city. At least 2 houses collapsed and several others were damaged in the area.

Things change.
Especially when working on #LaSoufriere
We were working with @uwiseismic in the Wallibou on Monday (left), then again today (right). Never underestimate the power of a lahar #stilldangerous pic.twitter.com/ZzfiEz929L

Flooding in Kingstown today as adverse weather conditions continue to affect the island. Please be safe everyone

Photos from the Red Zone on the Windward side of St.Vincent and the Grenadines, from Georgetown to Owia. Our CARICOM Operation Support Team (COST) visited the area. @CARICOMorg #RegionalResponse #RRMinaction #lasoufriereeruption2021 pic.twitter.com/sNSrY3Hv2R

To be safe: avoid sightseeing and stay off the roads as far as possible, NEMO said. Safeguard your health – avoid walking, playing, and swimming in floodwaters; stay indoors until floodwaters recede/withdraw; parents should monitor and ensure their children’s safety; avoid crossing rivers and streams and stay away from river banks and heavy gutters. Contact NEMO at 458-6366 or the hotline at 526-3000 to report all incidents related to this ongoing hazard.

Meanwhile, the local Metrological office says unstable conditions being enhanced by a favorable upper-level atmosphere continue to affect much of the region including Saint Vincent and the Grenadines. This has resulted in cloudy to overcast conditions with moderate to heavy showers, periods of rain, and thunderstorms, especially over the southern, eastern, and northeastern of the mainland St. Vincent from the early morning hours.

Rainfall accumulations ranging from 75 to 125 mm (3 to 5 inches) have already occurred over some parts of St. Vincent and the Grenadines during the past 6 hours and a further 50 mm (2 inches) with isolated higher amounts are possible across the island over the next 24 hours after which a gradual improvement can be expected, NEMO said on April 29.

A weather advisory remains in effect and residents and motorists are urged to exercise extreme caution in areas prone to flooding and landslides or near rivers and streams.

The Met Office is urging residents to be alert for possible impacts resulting from rain-soaked ash. In addition, residents especially in the Yellow, Orange, and Red Zones should avoid areas within the vicinity of rivers due to destructive mudflows (lahars). 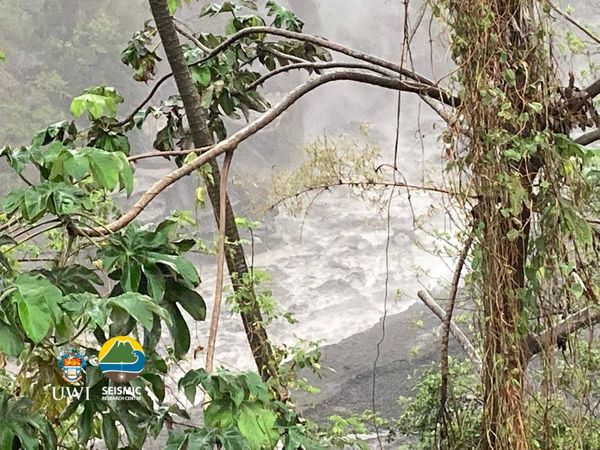 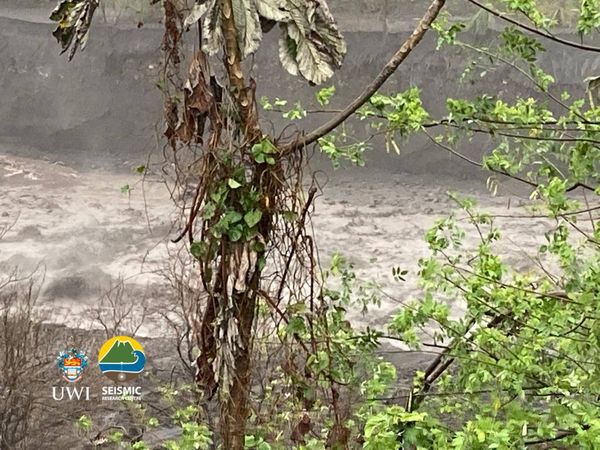 In the last 24 hours, only a few long-period, hybrid and volcano-tectonic earthquakes have been recorded and there was no further tremor.

The seismic stations recorded signals from multiple lahars during a 12-hour period starting at 21:00 LT on April 28. They seem to have taken place in all the valleys that drain from La Soufrière and caused considerable erosion and damage. Some of these were hot lahars which were visibly steaming, having passed through hot volcanic deposits.

So many trees were brought down by the lahars that floating logs are a hazard to small craft near shore.

The volcano continues to be in a state of unrest.

Explosions with accompanying ashfall, of similar or larger magnitude to those that have already occurred in this eruption, can take place with little or no warning.