Lahars were recorded at Peru's Ubinas and Huaynaputina volcanoes on February 11, 2020. Geophysical Institute of Peru (IGP) is urging residents and tourists to stay away.

IGP said the seismic station at Ubinas recorded internal tremors associated with the lahar descent of a moderate volume on February 11.

The lahar traveled down the southeast flank of the volcano along the Volcanmayo gorge at approximately 2 km (1.2 miles) from the Ubinas town.

The lahar at this volcano traveled down the southern sector through the El Volcán creek at an approximate distance of 500 m (1 640 feet) from the town of Quinistaquillas, Moquequa.

The last eruption at Haynaputina took place in the year 1600 (Volcanic Explosivity Index 6).

Outer flanks of this volcano are still heavily mantled by ash deposits from this powerful fissure-fed eruption that may have produced nearly 30 km3 (7.2 mi3) of dacitic tephra, including pyroclastic flows and surges that traveled 13 km (8 miles) to the east and SE. Lahars reached the Pacific Ocean, 120 km (74.5 miles) away.

The eruption caused substantial damage to the major cities of Arequipa and Moquengua, and regional economies took 150 years to fully recover.

Both lahar events were successfully alerted through IGP's application Volcanes Peru. If you are visiting the area, make sure you have it installed. 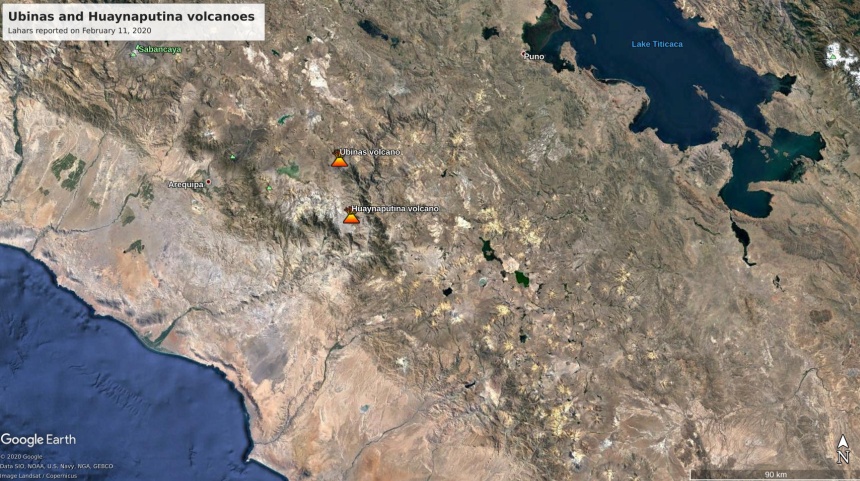 The upper slopes of the andesitic-to-rhyolitic Ubinas II stratovolcano are composed primarily of andesitic and trachyandesitic lava flows and steepen to nearly 45 degrees.

Debris-avalanche deposits from the collapse of the SE flank about 3 700 years ago extend 10 km (6.2 miles) from the volcano. Widespread Plinian pumice-fall deposits include one of Holocene age about 1 000 years ago. Holocene lava flows are visible on the flanks, but historical activity, documented since the 16th century, has consisted of intermittent minor-to-moderate explosive eruptions. (GVP)

Huaynaputina (whose name means "new volcano") is a relatively inconspicuous volcano that was the source of the largest historical eruption of South America in 1600 CE. It has no prominent topographic expression and lies within a 2.5-km-wide (1.5 miles) depression formed by edifice collapse and further excavated by glaciers within an older edifice of Tertiary-to-Pleistocene age.

Three overlapping ash cones with craters up to 100 m (330 feet) deep were constructed during the 1600 CE eruption on the floor of the ancestral crater, whose outer flanks are heavily mantled by ash deposits from the 1600 eruption.

This powerful fissure-fed eruption may have produced nearly 30 km3 (7.2 mi3) of dacitic tephra, including pyroclastic flows and surges that traveled 13 km (8 miles) to the east and SE. Lahars reached the Pacific Ocean, 120 km (74.5 miles) away.

The eruption caused substantial damage to the major cities of Arequipa and Moquengua, and regional economies took 150 years to fully recover. (GVP)