The explosion ejected incandescent material on the slopes of the volcano. Volcanic ash rose to a height of about 9.3 km (31 000 feet) above sea level, drifting east and southeast. 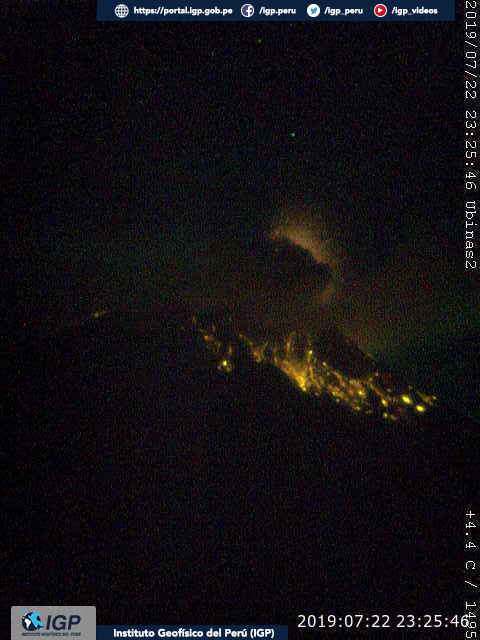 IGP issued a new ash dispersion alert for villages of the districts of Ubinas, Lloque and Chojata.

Buenos Aires VAAC reported continuous emission of steam and gasses, with sporadic pulses of volcanic ash, at 12:20 UTC. The previous ash pulse issued to 9.3 km (31 000 feet) a.s.l. has dissipated and can't be seen on satellite imagery.

A powerful eruption took place at the volcano on July 19, 2019, after increased seismic activity observed since the start of the month.

Information provided by webcam and satellite imagery obtained at 11:00 UTC on July 19, showed that eruptive cloud reached a height of 12.1 km (40 000 feet) above sea level.

There are few better demonstrations of Earth's fluid atmosphere than the dispersal of SO2 after explosive #volcanic #eruptions.#Sentinel5P #Tropomi data (-> July 16) show SO2 from the June 22 #Raikoke #eruption swirling around the Northern Hemisphere. @CopernicusEU pic.twitter.com/phaO8QvPTc

Ashfall was reported in the villages across Ubinas Valley and the Arequipa region –  in the towns of Ubinas, Escacha, Anascapa, Matalaque, San Miguel, Huarina and Tonohaya for which an ash dispersion alert has also been issued so that the authorities and the population take measures to avoid damage to health.

Authorities declared a state of emergency and evacuated 30 000 people living near the volcano.

The growth and destruction of Ubinas I was followed by the construction of Ubinas II beginning in the mid-Pleistocene. The upper slopes of the andesitic-to-rhyolitic Ubinas II stratovolcano are composed primarily of andesitic and trachyandesitic lava flows and steepen to nearly 45 degrees. The steep-walled, 150-m-deep (492 feet) summit caldera contains an ash cone with a 500-m-wide (1 640 feet) funnel-shaped vent that is 200 m (656 feet) deep.

Debris-avalanche deposits from the collapse of the SE flank about 3 700 years ago extend 10 km (6.2 miles) from the volcano. Widespread plinian pumice-fall deposits include one of Holocene age about 1 000 years ago. Holocene lava flows are visible on the flanks, but historical activity, documented since the 16th century, has consisted of intermittent minor-to-moderate explosive eruptions. (GVP)