Extremely dangerous Typhoon "Hagibis" is approaching Japan. Landfall is expected near Tokyo on October 12 with maximum sustained winds of 160 km/h (98 mph), equivalent to Category 2 hurricane on the Saffir-Simpson Hurricane Wind Scale. Authorities are urging residents and tourists to prepare in advance and protect their lives.

"The typhoon may make landfall in the Tokai or Kanto region on Saturday, and remain extremely strong. In addition to storm winds and high waves, we're looking at the possibility of record rainfall around the Kanto region," JMA's forecast chief Yasushi Kajihara said. "To protect your own life and your loved ones, please try to start evacuating early before it gets dark and the storm becomes powerful."

Waves may reach 13 m (42 feet) off Tokai, Kanto and the Izu Islands, and 10 m (33 feet) off Tohoku and Kinki regions. Storm surges are expected in eastern Japan and the Kinki region between Saturday afternoon and evening.

Weather officials are urging people to keep track of the latest weather bulletins and local evacuation advisories and to flee to safety before conditions deteriorate, NHK reports.

More than 900 flights have already been canceled. Rail operators warned they expect major disruptions over the weekend, too. 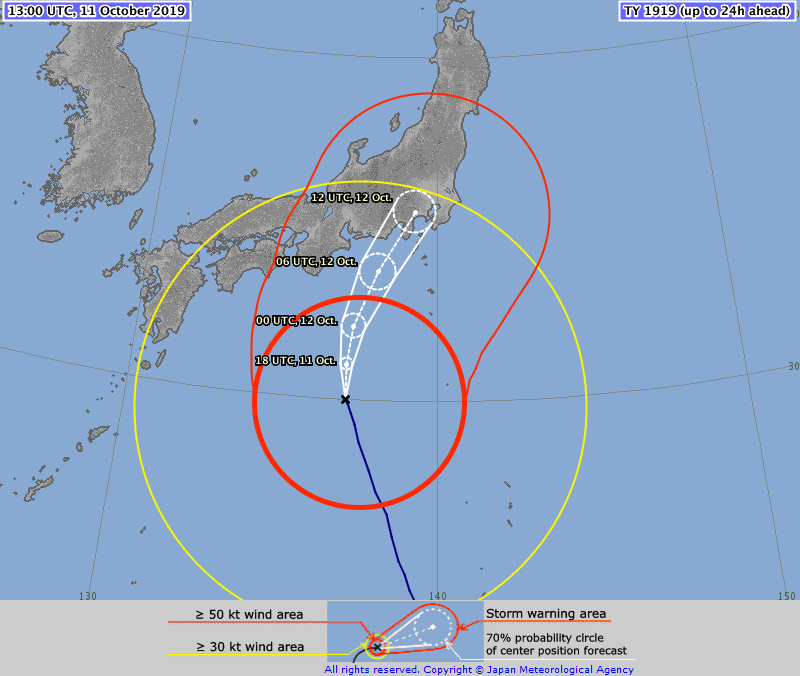 The Rugby World Cup held in Tokyo and other events and tourist attractions, including Tokyo Disneyland and Tokyo DisneySea, have been canceled.

He recommended filling bathtubs, kettles and buckets with water that can later be used to flush toilets and fulfill other domestic purposes. Flashlights, lanterns and portable radios will also come in handy in the event of a power failure, he said.

Other safety precautions, he said, include taping windows in all directions to prevent them from fragmenting when they break, stocking up on enough potable water for three days, and topping up the gas tanks of cars and other vehicles.

Residents are also advised to charge their smartphone batteries, secure laundry poles and empty fridges of perishable food that could spoil in a power outage.

Hagibis will hit the same region as the devastating Typhoon "Faxai" just one month ago. Faxai destroyed approximately 30 000 homes, left nearly 1 million without power, killed 2 and injured more than 40.

According to Philip Klotzbach, a meteorologist at the Colorado State University, Hagibis underwent the strongest quick intensification of any tropical cyclone from the western Pacific in at least 23 years.