PVMBG is reporting increased seismic activity under Tangkubanparahu volcano (also known as Tangkuban Perahu), West Java, Indonesia. The last time this volcano erupted was back in 2013 (VEI 2). This volcano has a known history of VEI 1 and 2 eruptions over the past 10 000 years.

Seismicity started increasing at the end of June 2019, sharply increasing on July 10 and then again on the 22nd. PVMBG reports white smoke at the crater with moderate to thick intensity.

Data is still being collected and analyzed, Head of the Volcanic Mitigation Division Dr. Hendra Gunawan told AFP. "Evaluation of the activity will be completed over the next few days," he said.

Residents living around Tangkubanparahu and visitors, tourists, and climbers are not allowed to go down to the bottom of the crater of Ratu and Upas Crater and should not stay in the active crater area inside the volcanic complex. Stay aware of sudden phreatic eruptions which are not preceded by clear volcanic symptoms. 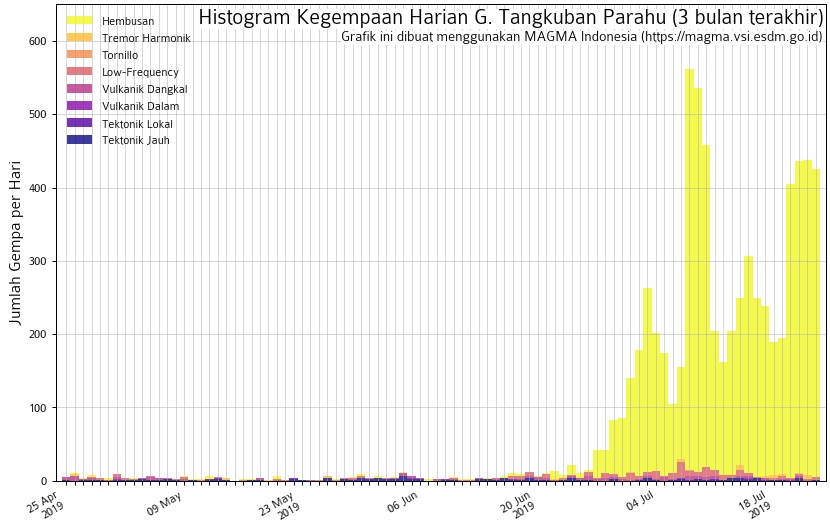 Tangkubanparahu (also known as Tangkuban Perahu) is a broad shield-like stratovolcano overlooking Indonesia's former capital city of Bandung. The volcano was constructed within the 6 x 8 km (3.7 x 4.9 miles) Pleistocene Sunda caldera, which formed about 190 000 years ago.

The volcano's low profile is the subject of legends referring to the mountain of the "upturned boat."

The rim of Sunda caldera forms a prominent ridge on the western side; elsewhere the caldera rim is largely buried by deposits of Tangkubanparahu volcano. The dominantly small phreatic historical eruptions recorded since the 19th century have originated from several nested craters within an elliptical 1 x 1.5 km (0.6 x 0.9 miles) summit depression. (GVP)