On June 11, multiple severe storms occurred over parts of Central Europe, with several prolific hail producers and two of them even produced hailstones reaching a diameter of 10 cm (3.9 inches) or more – giant hail.

Such large hail was reported from Gorzów Wielkopolski-Ustronie and Wojcieszyce in western Poland with the largest stone measuring 12 cm (4.7 inches), according to a report published by the European Severe Storms Laboratory (ESSL). "This makes it the biggest officially measured hailstone in this country according to our partner Skywarn Polska."

Marko Korosec, a weather adviser for traffic and highways, said hailstones that fell on Slovenia that day were the size of oranges (up to 14 cm / 5.5 inches). They caused significant damage to cars and houses, leaving complete destruction in some areas. More than 200 buildings were damaged in Stari Trg ob Kolpi, Črnomelj alone, and about 130 in Kočevje.

"Most of the roofs of houses were completely destroyed, cars as well – all windows and windshields shattered. The biggest I measured was 11 cm [4.3 inches] which was two to three hours after the storm. In that time they would have melted by 2 cm to 3 cm [0.8 – 1.2 inches] so in reality, the hailstones were up to 14 cm [5.5 inches] in diameter."

Hail the size of golf and tennis balls damaged numerous cars, boats and homes in the state of Bavaria, including its capital Munich, local media reported.

Violent hailstorms swept through southeastern France on June 15 and 16, 2019, causing significant infrastructural and agricultural damage. One person was killed in the town of Taninges, Haute-Savoie department of Auvergne-Rhône-Alpes region.

Farmers reported hail the size of golf balls and up to tennis balls decimated their orchards and vineyards. In some cases, entire harvests were destroyed.

"It's catastrophic, I've rarely seen scenes like this," Guillaume said Sunday. "It's unthinkable that farmers would be forced into bankruptcy because of this."

Severe storms also hit other parts of Europe, including Switzerland where a woman died after her excursion boat capsized in Lake Geneva. Local media reported the storm caused severe destruction in the city of Geneva.

It took just 1 hour for winds of more than 50 kt (93 km/h / 58 mph) and violent hailstorm to cause a great deal of damage to the Bol d'Or Mirabaud fleet, world's most important regatta in closed waters with more than 500 boats at the start.

Although exact statistics do not exist, regatta organizers reported at least 212 abandonments, 40 dismastings and several capsized sailboats. Many people ended up int the water and had to be rescued.

Before June 11, 2019, giant hail was reported 91 times in the European Severe Weather Database (www.eswd.eu) across many different regions in Europe (see figure below) and 42 times since the founding of ESSL on January 1, 2006.

Giant hail comprises on only about 0.38% of all large hail reports (minimum diameter 2 cm / 0.78 inches) submitted to the database. Such hail can cause very serious damage, injuries and occasionally be fatal to humans and animals. 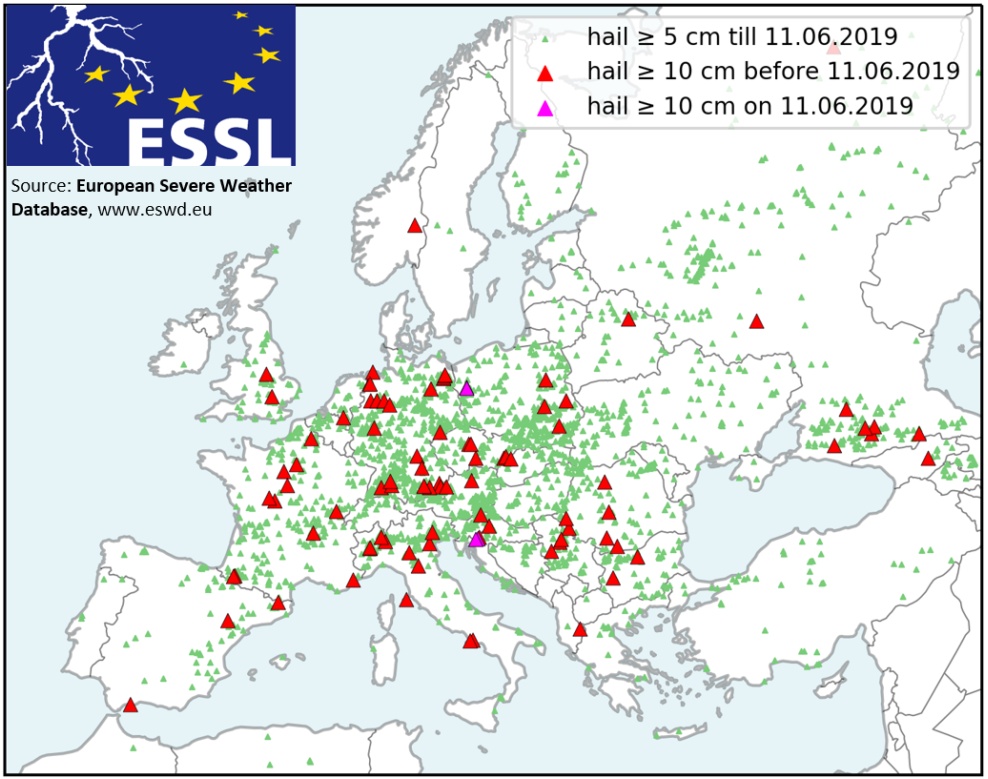