Officials warn that land subsidence poses a grave danger, AP reports. Up to 22 cm (8.6 inches) of annual subsidence has been recorded near the capital, while the normal range would be only as high as 3 cm (1.1 inches). Even higher numbers have been reported in other parts of the country as well as sinkholes as deep as 60 m (196 feet).

Some fissures are several kilometers in length and up to 4 m (13 feet) wide and deep, according to GFZ Potsdam researchers who used satellite imagery to measure land subsidence in greater Tehran area between 2015 and 2017. 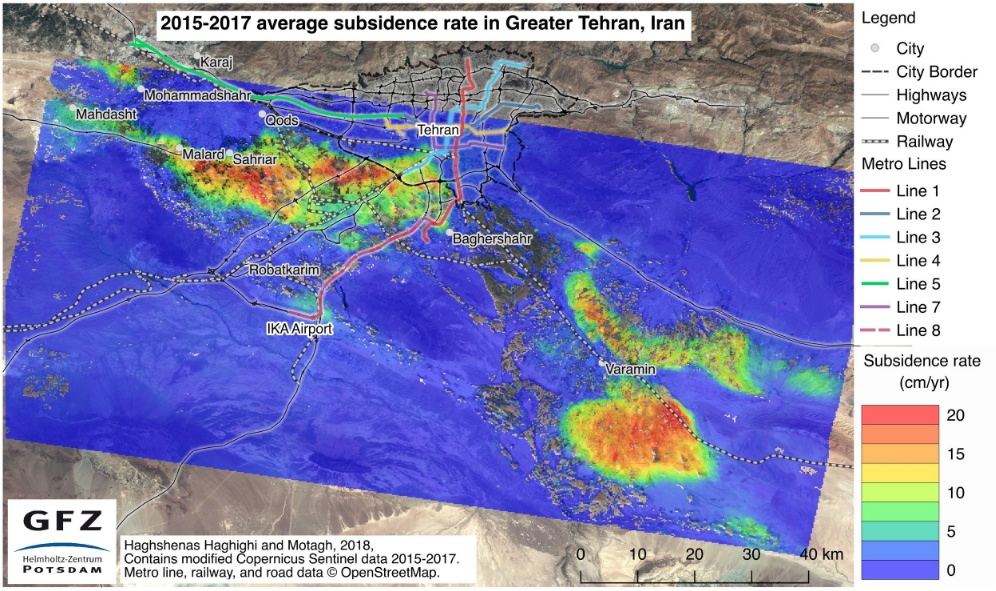 "It's a destructive phenomenon whose impact may not be immediately felt like an earthquake, but as you can see, it can gradually cause destructive changes over time," a measurement expert at Iran's cartography department told the Associated Press.

We see the destruction of farmland, the cracks of the earth’s surface, damage to civilian areas in cities, wastewater lines, cracks in roads and damages to water and natural gas pipes, he said.

Faced with international sanctions imposed after its revolution in 1979, Iran invested a lot in self-sufficiency across all industrial sectors, including agricultural which represents over 90% of the country's water usage.

Rapid urban growth coupled with one of the most prolonged and severe droughts the region has seen in more than 30 years led to excessive groundwater extractions and resulted in alarming subsidence evident in huge fissures and sinkholes now opening across the country.

In a speech made a couple of months ago, Iranian Brig.-Gen. Gholam Reza Jalali said that the changing climate over Iran is suspected of foreign intervention, the Iranian Students’ News Agency reported. Jalali added that research centers in the country studying climate change have confirmed this and that Iran is also facing 'snow theft.'

"Jalali probably has documents of which I am not aware, but on the basis of meteorological knowledge, it is not possible for a country to steal snow or clouds," Ahad Vazife, the head of Iran’s meteorological service said at the time, adding that prolonged drought is a global trend that does not only apply to Iran.