Strombolian explosions have returned to Chilean Villarrica volcano on January 24, 2019. Similar activity was observed at the beginning of the month.

The volcano is producing lava fountains up to 35 m (115 feet) above the crater rim, ejecting incandescent cinder, lapilli, and lava bombs up to 15 cm (5.9 inches) in diameter, P.O.V.I. reports.

The communes of Villarrica, Pucón, Curarrehue and Panguipulli remain in preventive early warning since January 5, 2018. 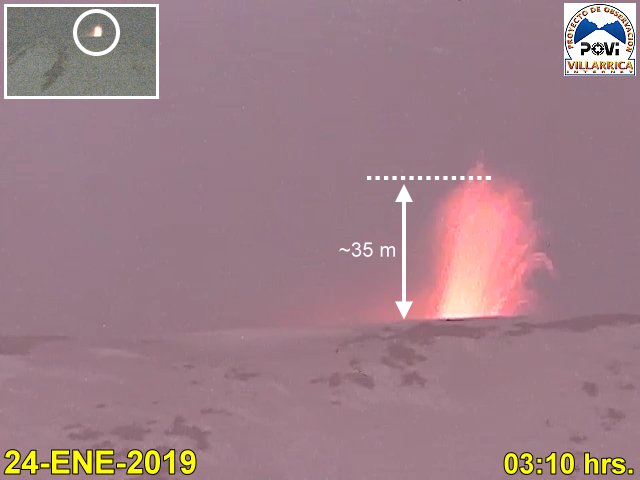 Similar activity with lava fountains up to 30 m (98 feet) was observed on January 3, 2019, after 5 weeks of break. Light ashfall was reported on the eastern flank of the volcano.

The Alert Level for the volcano remains at Green (1 of 4).

Hydrographic and Oceanographic Service of the Chilean Navy (SHOA) installed a new sea level station in Lake Villarrica on January 21. The station is equipped with a hydrostatic sensor, water and air temperature sensors, relative humidity sensor and radar.

It will send data to SHOA through GPRS and GOES telemetry in real time.

The last major eruption at Villarica took place in 2015.

Increased seismicity, crater incandescence and explosions increased at the volcano on February 6, 2015, leading to intense and continuous strombolian activity at the beginning of March. This was followed by ejection of a large volume of material, 1.5 km (0.93 miles) tall lava fountains and large lava flows. The eruptive plume rose up to 8 km (26 250 feet) above the crater and drifted 400 km (250 miles) ENE. The Alert Level was raised to Red (the highest level on a four-color scale).

The exclusion zone around to volcano was reduced to 5 km (3.1 miles) on March 4. The Alert Level was lowered to Orange on March 6 and to Yellow on June 8.

Glacier-clad Villarrica, one of Chile's most active volcanoes, rises above the lake and town of the same name. It is the westernmost of three large stratovolcanoes that trend perpendicular to the Andean chain.

A 6-km-wide (3.7 miles) caldera formed during the late Pleistocene. A 2-km-wide (1.24 miles) caldera that formed about 3 500 years ago is located at the base of the presently active, dominantly basaltic to basaltic-andesitic cone at the NW margin of the Pleistocene caldera.

More than 30 scoria cones and fissure vents dot the flanks. Plinian eruptions and pyroclastic flows that have extended up to 20 km (12.4 miles) from the volcano were produced during the Holocene.

Lava flows up to 18 km (11.2 miles) long have issued from summit and flank vents.

Historical eruptions, documented since 1558, have consisted largely of mild-to-moderate explosive activity with occasional lava effusion. Glaciers cover 40 km2 (15.4 mi2) of the volcano, and lahars have damaged towns on its flanks. (GVP)