New eruptions took place at Agung volcano in Indonesia on January 21 and 22, 2019. The Aviation Color Code is Orange. The volcano Alert Level is at 3 of 4.

"Conditions in Bali are safe and there is no impact damage," said Sutopo Purwo Nugroho, a spokesperson for the nation's disaster management agency.

The exclusion zone is currently stable at a 4-km (2.5 miles) radius. 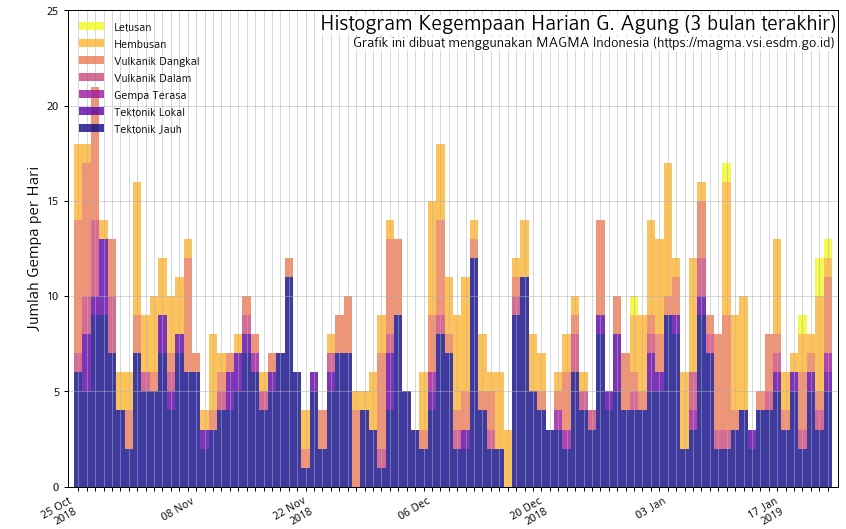 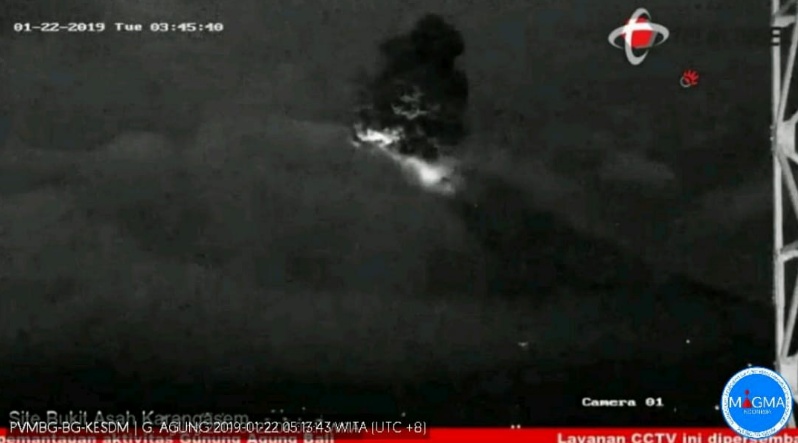 Another eruption was reported by a ground observer at 19:48 UTC, January 22. However, the summit is obscured by a meteorological cloud and volcanic ash is unidentifiable on satellite imagery, the Darwin VAAC reported 20:00 UTC.

There are no evacuations and the volcano's Alert Level remains at 3 (on a scale of 1 – 4).

A sudden eruption took place at the volcano at 20:09 UTC on December 29, 2018. Thin ashfall was reported in nearby communities.

The eruption lasted 3 minutes and 8 seconds with an amplitude of 22 mm. Incandescence was observed at the crater but ash column was not observed due to fog, PVMBG said.

Volcanic ash was observed on satellite imagery taken 21:00 UTC rising up to 5.5 km (18 000 feet) above sea level and moving southeast.

Mount Agung remained largely quiet for 54 years (since 1964) until renewed seismicity began in August 2017, the prelude to a new eruptive episode, which started in late November 2017 and is ongoing.

Exponential increases in the rate of events during the middle of September led PVMBG to incrementally raise the Alert Level from 2 to 4 between September 14 and 22.

According to the GVP, the February 1963 to January 1964 eruption, Indonesia's largest and most devastating eruption of the twentieth century, was a multi-phase explosive and effusive event that produced both basaltic andesite tephra and andesite lava.