Tropical Storm "Usagi" made landfall in southern Vietnam around 06:00 UTC on November 25, 2018, with maximum sustained winds of 83 km/h (52 mph). This is the 27th named storm of the 2018 Pacific typhoon season and the 8th tropical cyclone to hit Vietnam this season. It comes just several days after Tropical Cyclone "Toraji" hit the country, leaving more than 12 people dead.

Usagi made landfall close to the Vung Tau town of Ba Ria-Vung Tau Province and continued moving northwestward inland over Ho Chi Minh city area toward southern Cambodia as a tropical depression. Authorities issued evacuation orders for more than 100 000 people ahead of the storm. 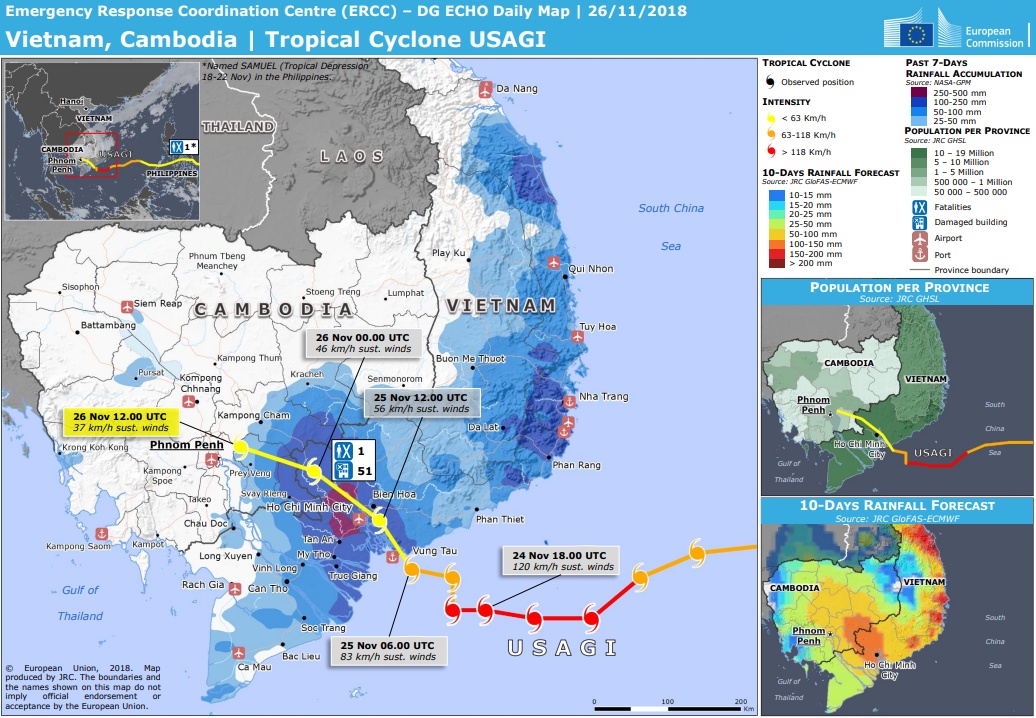 Ho Chi Minh received more than 350 mm (14 inches) before the storm moved away, resulting in widespread flooding and travel disruption.

Winds brought by the storm downed numerous trees in the popular beach town of Vung Tau, destroyed roofs of homes and sank boats along the coast, caused power outages and damaged at least 51 homes in Ho Chi Minh City area.

At least one person lost its life after being hit by a falling tree while riding a motorcycle.

Tropical depression Usagi is moving over #Vietnam to #Cambodia. The winds have weakened but the rain still continues. There is still uncertainty in the forecast, but there is a chance the depression later approaches #Thailand. #weather #foreca #Usagi #rain pic.twitter.com/RHhJ1uXFVz

Its some murky night in #saigon while #Usagi hits, I am hunkered down! pic.twitter.com/N2hL7DsyAB

Usagi moved over the Philippines as a tropical depression before it hit Vietnam, leaving at least one person dead on November 21 due to floods triggered by heavy rainfall.