Hurricane "Beryl" formed July 6, 2018, as the first hurricane of the 2018 Atlantic hurricane season. Beryl is a small hurricane but is expected to increase in strength and size before it approaches the Lesser Antilles over the weekend. 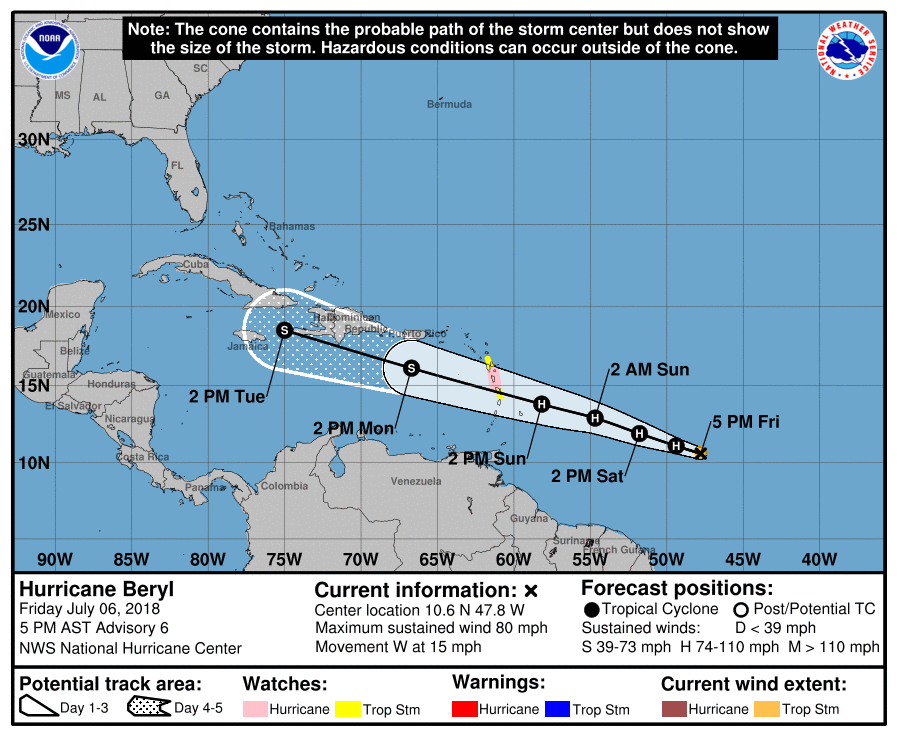 A faster westward to west-northwestward motion is expected to begin over the weekend and continue through early next week, NHC forecasters said.

On the forecast track, the center of Beryl will approach the Lesser Antilles over the weekend and cross the island chain late Sunday or Monday.

Maximum sustained winds are near 130 km/h (80 mph) with higher gusts. Some strengthening is forecast during the next couple of days, and Beryl could still be a hurricane when it reaches the Lesser Antilles late Sunday or Monday, July 8 and 9.

Weakening is expected once Beryl reaches the eastern Caribbean Sea on Monday, but the system may not degenerate into an open trough until it reaches the vicinity of Hispaniola and the central Caribbean Sea. 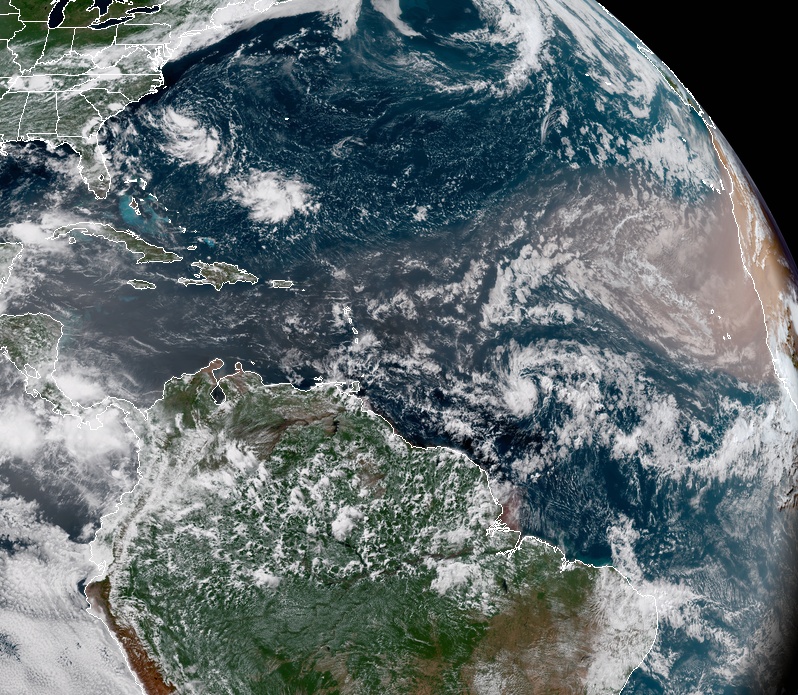 At 104 km/h (65 mph) on July 5, Beryl had the strongest winds for an Atlantic tropical cyclone this far south (10.4°N) in July on record, according to Philip Klotzbach, Colorado State University (CSU) meteorologist specializing in Atlantic basin seasonal hurricane forecast. Beryl is also the 2nd earliest calendar year hurricane in the tropical Atlantic (<20°N, 60-20°W) on record, trailing only 1933. With maximum sustained winds of 130 km/h (80 mph) on July 6 – Beryl became the strongest July Atlantic hurricane in the tropics (south of 23.5°N) since Bertha (2008).

Of the 89 pre-August hurricanes on record, Beryl is the easternmost among those that formed from African waves, by a huge margin. One further east was Dorothy on July 24, and 2 further east were in January (all 3 moving north), said Brian McNoldy, Senior Research Associate at Univ. of Miami's Rosenstiel School.

On July 2, CSU meteorologists have decreased their forecast of Atlantic seasonal hurricane activity and landfall strike probability and 'now believe that 2018 will have below-average activity.'

"The tropical and subtropical Atlantic is currently much colder than normal, and the odds of a weak El Niño developing in the next several months have increased," they said.

"With the decrease in our forecast, the probability for major hurricanes making landfall along the United States coastline and in the Caribbean has decreased as well.

"As is the case with all hurricane seasons, coastal residents are reminded that it only takes one hurricane making landfall to make it an active season for them. They should prepare the same for every season, regardless of how much activity is predicted."