At least 10 people have been killed and one was injured after heavy rains triggered a large landslide in the Lunglei town of northeast India's state of Mizoram on June 5, 2018. Heavy rains are expected to continue today.

The slide hit two-storied semi-pucca building, killing 7 members of a family and three members of another family residing in the building's first floor. Four people were rescued, one of them with injuries.

"Rescue workers are searching for bodies and other people feared trapped in the debris since this morning," a police official said.

Landslides in this region are common in the pre-monsoon month of June and during the monsoon season from July to September.

Heavy rains are expected to continue throughout the state on Tuesday, June 5, as the monsoon, which arrived over the northeastern states on June 1, gradually progresses.

Skymet Weather meteorologists had predicted early onset of the Southwest Monsoon this year. "Monsoon would move at a faster pace over East and Northeast India, central parts of the country as well as along the West Coast," they said.

However, Monsoon 2018 would move at a moderate speed when it comes to northwestern plains of Uttar Pradesh, Delhi-NCR, West Madhya Pradesh and few parts of West Rajasthan, they added.

By June 25, it would cover most parts of the country, barring West Rajasthan and some pockets of Punjab and Haryana.

Southwest Monsoon 2018 is most likely to cover the entire country by July 10, which is also five days earlier than its official date of July 15.

The following table would give insight about the time Monsoon 2018 is likely to make onset major cities of India. 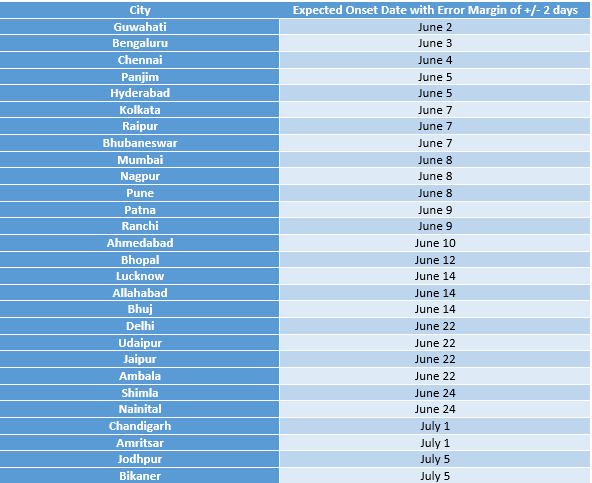 In June 2017, more than 10 people were killed when heavy rain that hit Lunglei district caused flash floods and landslides.