A team of seismologists has developed a new measurement of seismic energy release that can be applied to large earthquakes. Called the Radiated Energy Enhancement Factor (REEF), it provides a measure of earthquake rupture complexity that better captures variations in the amount and duration of slip along the fault for events that may have similar magnitudes.

Magnitude is a measure of the relative size of an earthquake. There are several different magnitude scales (including the original Richter scale), with the "moment magnitude" now the most widely used measure because it is uniformly applicable to all sizes of earthquakes. The seismic energy released in an earthquake can also be measured directly from recorded ground shaking, providing a distinct measure of the earthquake process. Earthquakes of a given magnitude can have very different radiated seismic energy.

Researchers at UC Santa Cruz and California Institute of Technology (Caltech) devised REEF in an effort to understand variations in the rupture characteristics of the largest and most destructive earthquakes, such as the 2004 Sumatra earthquake (magnitude 9.2) and 2011 Tohoku earthquake in Japan (magnitude 9.1).

REEF is measured by the ratio of the earthquake's actual measured radiated energy (in seismic waves recorded around the world) to the minimum possible energy that an event of equal seismic moment and rupture duration would produce.

If the rupture is jerky and irregular, it radiates more seismic energy, especially at high frequencies, and this indicates frictional conditions and dynamic processes on the fault plane during rupture, said study co-author Thorne Lay explained, a professor of Earth and planetary sciences at UCSC. 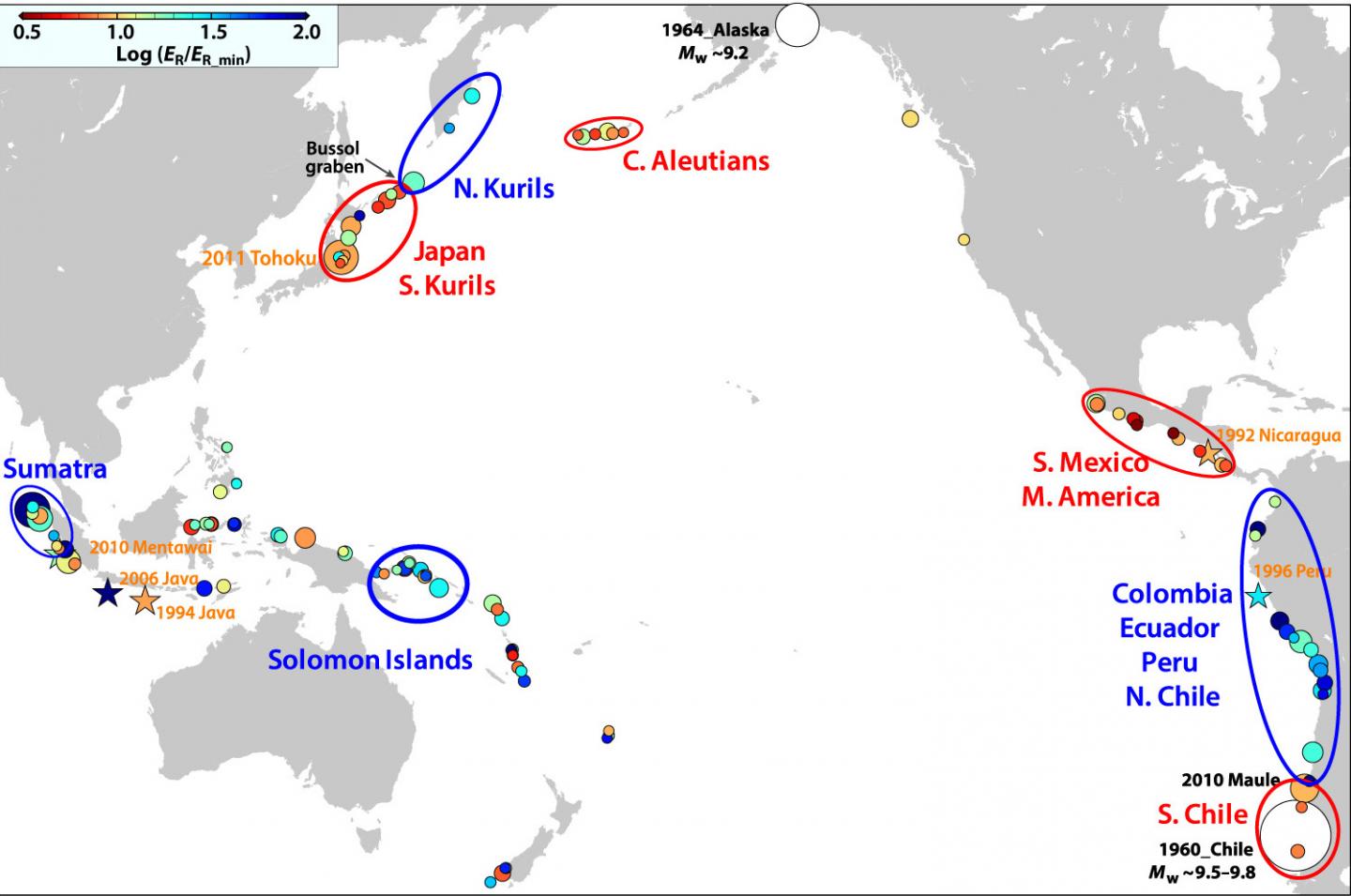 A map summarizing the new REEF measure of seismic energy for events around the Pacific Ring of Fire shows the regional patterns indicating earthquake rupture character is affected by persistent features that differ from region to region. Credit: Ye et al., Science Advances, 2018

The researchers made systematic measurements of REEF for 119 recent major earthquakes of magnitudes 7.0 to 9.2. They found clear regional patterns, with some subduction zones having higher REEF ruptures on average than other zones.

"This indicates, for the first time, that energy release is influenced by regional properties of each fault zone," said Lay.

The precise cause of some regions radiating higher energy in an event of given size is still under investigation, but may be linked to regional differences in the roughness of the faults, in the fluid distributions on the faults, or in the sediments trapped in the fault zone, he said.

Further research using REEF could help seismologists achieve a better understanding of earthquake mechanics and earthquake hazards around the world.