The first observation of a super-hydrated phase of the clay mineral kaolinite could improve our understanding of processes that lead to volcanism and affect earthquakes.

In high-pressure and high-temperature X-ray measurements that were partly conducted at DESY (German Electron Synchrotron), scientists created conditions similar to those in so-called subduction zones where an oceanic plate dives under the continental crust. The transport and release of water during subduction causes strong volcanic activity. An international team led by scientists of Yonsei University in the Republic of Korea, presents the results in the scientific journal Nature Geoscience. 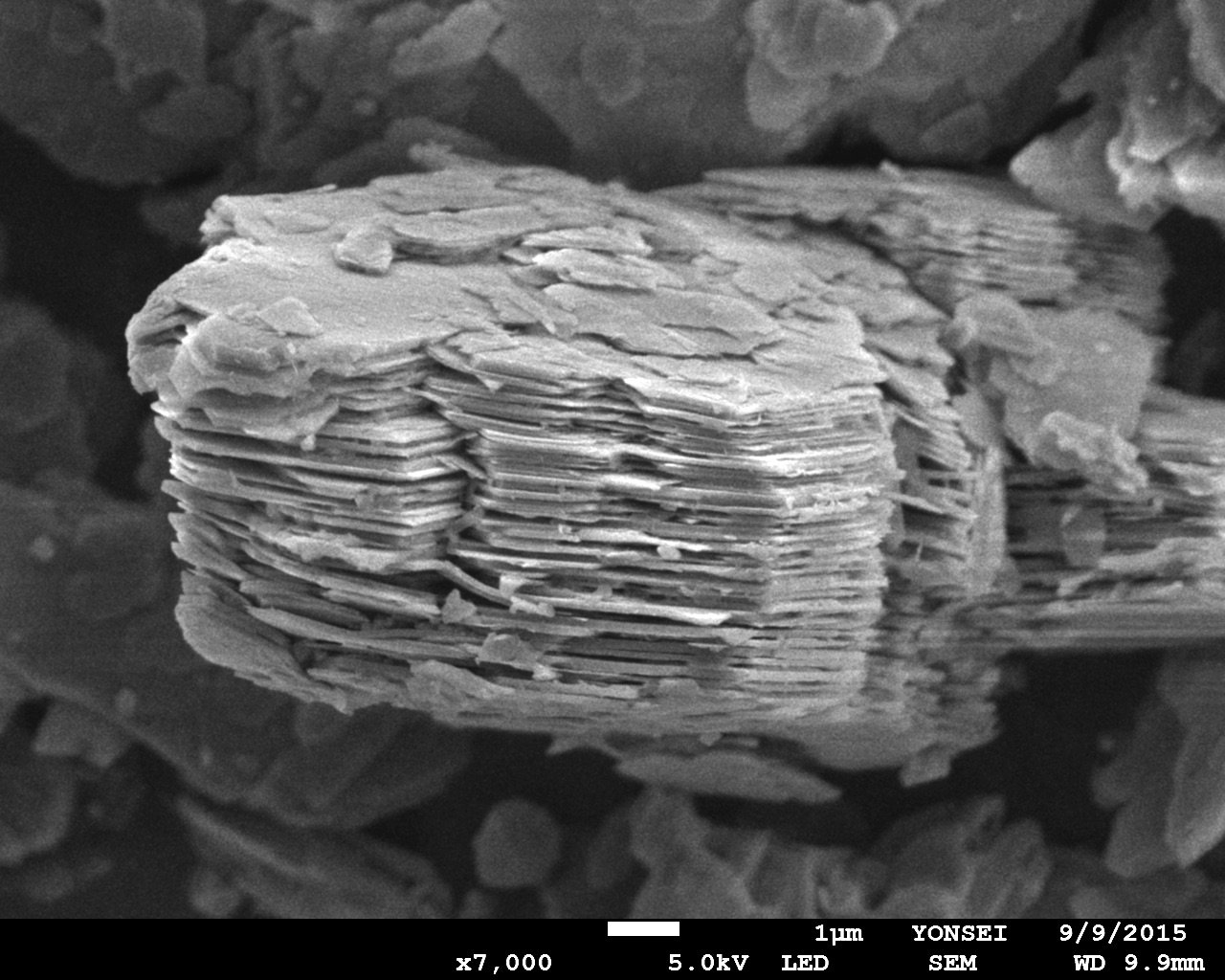 In a subduction zone, a heavy oceanic plate meets a second, lighter continental plate and moves under it and into the earth's mantle. With the oceanic plate, water enters the earth as it is trapped in minerals of the oceanic crust or overlaying sediments. These minerals slowly sink deeper into the mantle over millions of years. With increasing depth, temperature and pressure, the minerals become instable, break down and transform into new compounds.

During these transformations, water is released and rises into the surrounding, hotter mantle where it decreases the melting temperature of the mantle rock. "When the mantle rocks melt, magma is generated. This can lead to volcanic activity when the magma rises to the surface," explains Yongjae Lee from Yonsei University who led the study. "While we know that the water cycle in subduction zones influences volcanism and possibly seismicity, we don't know much about the processes that form this cycle."

Since these processes take place many kilometers under Earth's surface, it is impossible to observe them directly. Even the Kola Superdeep Borehole in Russia, the deepest borehole on Earth, reaches no deeper than 12 262 m (40 230 feet). One way to learn more about the transformations in greater depths of subduction zones is to create similar conditions in the laboratory. High-pressure and high-temperature measurements allow scientists to take a close look at the structural changes in the different minerals that form the crust and sediments. 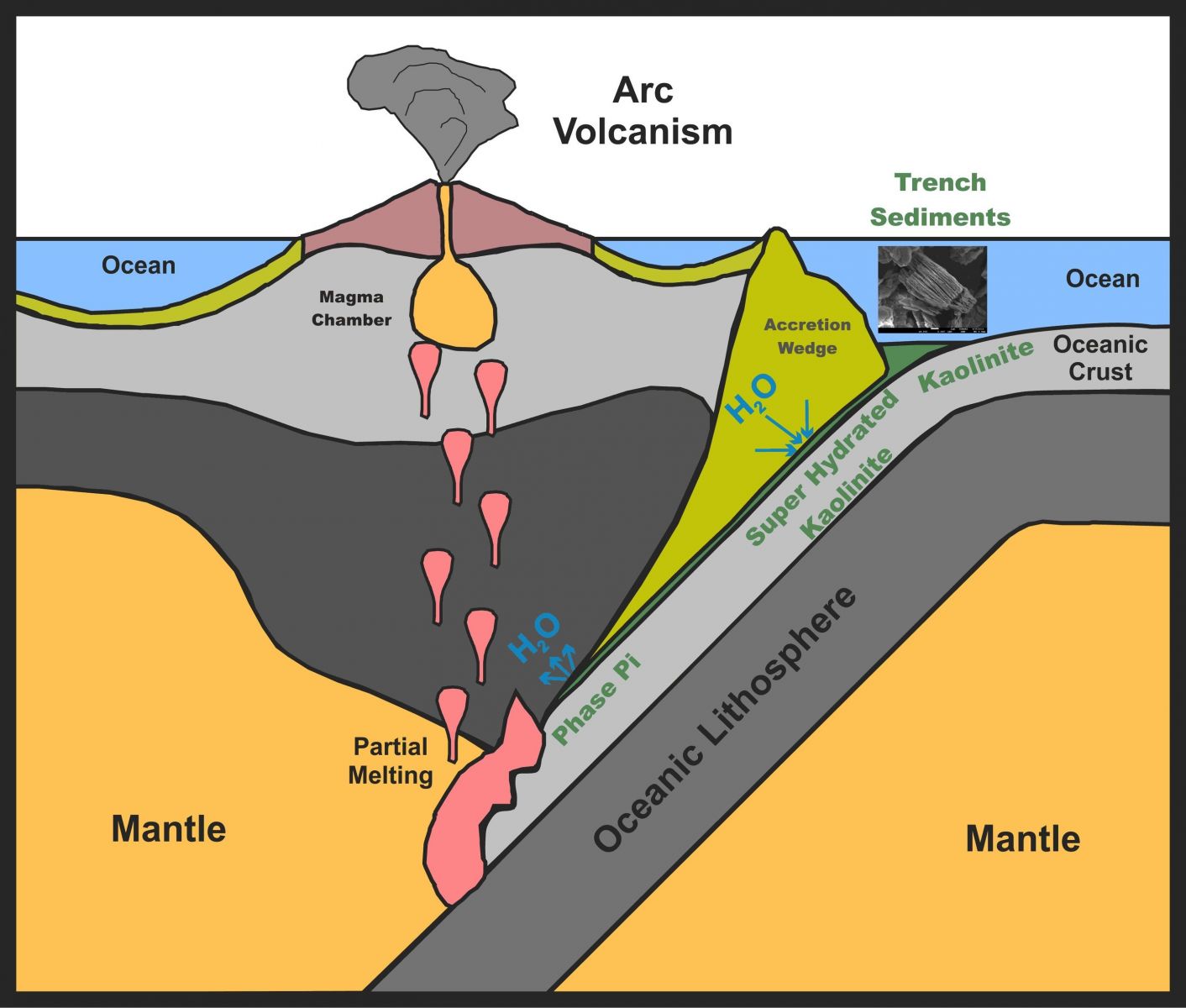 Kaolinite sinks into the subduction zone with the oceanic plate. As it changes into the newly discovered phase it takes in water from its surroundings and releases it upon further structure change down in the mantle. Credit: Wikimedia Commons, MagentaGreen (modified) CC BY SA 3.0

One of these minerals is kaolinite, a clay mineral containing aluminium that is an important part of the oceanic sediments. The scientists were now able to observe the formation of a new phase of the mineral, so-called super-hydrated kaolinite. They examined a sample of kaolinite in the presence of water at pressures and temperatures corresponding to those at different depths in subduction zones. With X-ray diffraction and infrared spectra measurements, structural and chemical changes were characterized.

At a pressure of circa 2.5 Giga-Pascal (GPa), more than 25 000 times the average pressure at sea level, and a temperature of 200 °C (392 °F), the super-hydrated phase was observed. These conditions are present at a depth of about 75 km (46.6 miles) in subduction zones. In the new phase, water molecules are enclosed between the layers of the mineral. The super-hydrated kaolinite contains more water than any other known aluminosilicate mineral in the mantle. When pressure and temperature sink back to ambient conditions, the structure reverts to its original form.

In measurements carried out at the Extreme Conditions Beamline P02.2 at DESYs X-ray source PETRA III, the scientists examined the breakdown of the new phase at even higher pressures and temperatures. "Our beamline provides an environment to investigate samples at extreme pressures and temperatures. Using a so-called graphite resistive heated diamond anvil cell, we were able to observe the changes at a pressure of up to 19 Giga-Pascal and a temperature of up to 800 degrees," says DESY-scientist Hanns-Peter Liermann of the Extreme Conditions Beamline who co-authored the study. The super-hydrated kaolinite broke down at 5 Giga-Pascal and 500 °C (932 °F), two additional transformations happened at higher pressures and temperatures. During these transformations, the water that was intercalated in the kaolinite is released.

The observation of the formation and breakdown of the super-hydrated kaolinite bears important information about the processes that occur over a depth range of about 75 km to 480 km (46.6 to 298.26 miles) in subduction zones. The release of water that takes place when the super-hydrated kaolinite breaks down could be an important part of the water cycle that causes volcanism along subduction zones. The breakdown probably happens below a depth of about 200 km (124 miles), the released water could then contribute to the formation of magma.

Additionally, the super-hydrated kaolinite could influence seismicity. During the formation of the new phase, the water that surrounds kaolinite is removed from the environment. This could change the friction between the subducting and the overlying slabs. The scientists assume that other minerals in the sediment or crust could undergo similar transformations. Thus, the study could improve the understanding of the geochemical processes in subduction zones of the earth.