Following rare M5.4 earthquake on September 12, 2017, southeastern Republic of Korea was hit by another M5.4 on November 15, making these the two largest earthquakes to hit the country since Global CMT and USGS ANSS catalogs began recording in 1977. At least 58 aftershocks hit the region by late November 20. Because three nuclear reactors are located within 12 km (7 miles) from the Yangsan Fault, responsible for these quakes, experts suggest that further investigation by the national authorities would now be prudent.

The November 15th M5.4 quake struck 9.3 km (5.8 miles) WNW of the industrial city of Pohang (population 500 000) at 05:29 UTC at a depth of 10 km (6.2 miles). The USGS issued green alert for shaking-related fatalities and yellow for economic losses. The quake was felt across much of the country including in the capital Seoul. 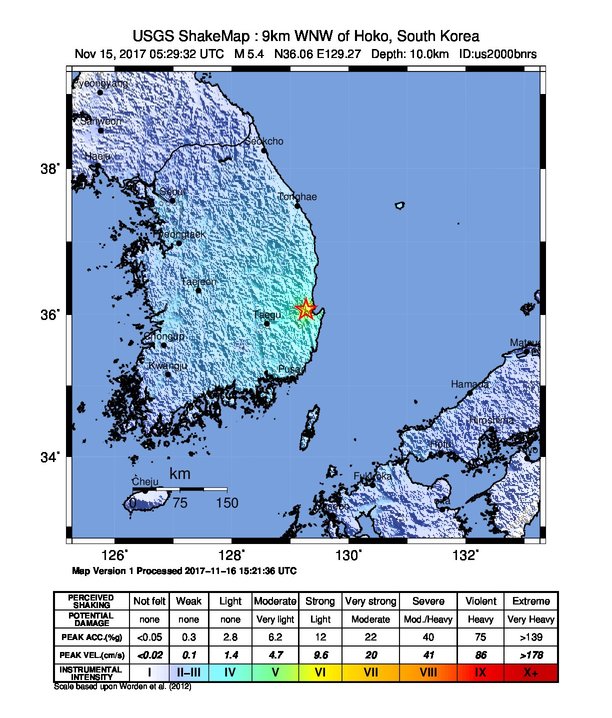 State officials said 5 569 cases of facility damage had been filled by 23:00 local time Sunday, November 19. Most of the damaged buildings were houses that sustained collapsed roofs or partial or full destruction. 300 business buildings were damaged, with about 230 schools. The number of homeless victims, at the time, stood at 1 099, according to The Korea Herald.

In total, 89 people were injured, including one in critical condition due to an injury from a rockfall.

Of 58 aftershocks registered by late November 20, two were in the mid-3 magnitude range, including the second strongest M3.6.

According to Ross Stein of Temblor and Jaesung Park of Nephila Advisories, both M5.4 quakes (September 12 and November 15) appear to lie on or close to the likely 120 km (70 miles) long active Yangsan Fault, a length that would make possible a future M~7.3 earthquake. The slip rate along the fault is likely low, and so while such earthquakes would be possible, they also would be rare.

Stein and Park examined the seismic catalogs, Google Earth imagery of the faulted landforms, the Global Earthquake Activity Rate (GEAR) model, and the GPS-derived crustal strain rates (GSRM2.0), to assess the significance of the seismic threat.

"We believe all these data are consistent with an active fault (with oblique right-lateral reverse slip, and dipping to the southeast) capable of rupturing in a large earthquake. We could trace the fault for about 85 km (52 miles), through the cities of Yangsan and Gyeongju. For much of this route, rivers have incised the valleys and altered fault-formed scarps, and so we are not certain that the fault is a truly continuous feature." 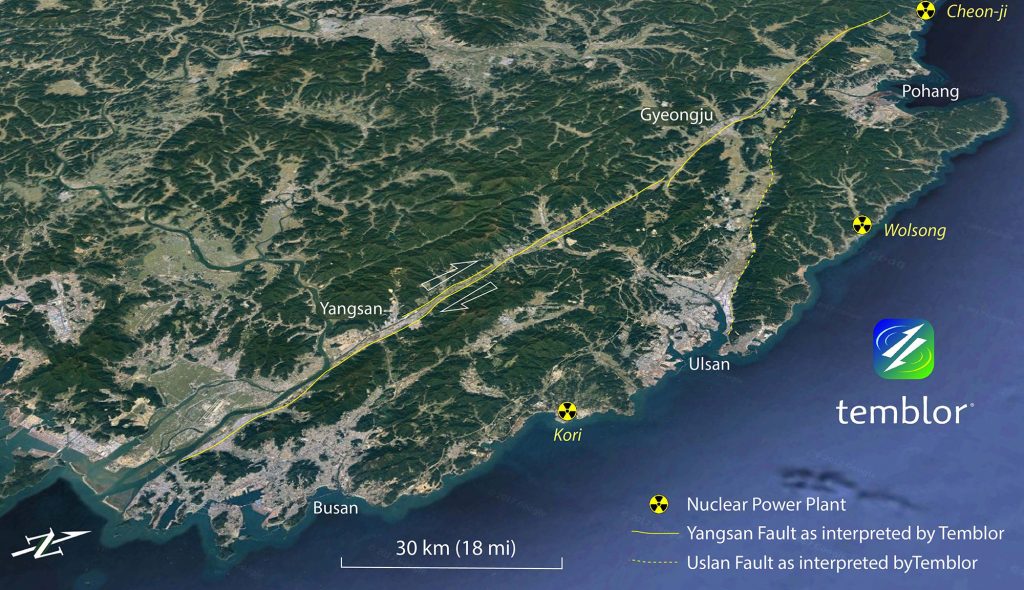 The slip rate is probably low (<1 mm/yr), but because three nuclear reactors are located within 12 km (7 miles) from the Yangsan Fault, Stein and Park suggest that further investigation by the national authorities would now be prudent.

"We recommend that the seismic hazard be reassessed in light of the two recent M5.4 shocks, because their locations and focal mechanisms are consistent with the existence of an active fault capable of much larger earthquakes, whose shaking could be larger than was anticipated in the design of the nuclear power plants."