The islands of the Japanese archipelago are affected both by frequent, low-magnitude earthquakes and tremors and by larger, highly destructive events. One of the largest quakes to strike Japan occurred in 1944, leading to the loss of more than 1 200 lives on the main and most populated island of Honshu.

Its strength resulted from the abrupt release of plate tectonic forces, a process known as subduction, centered on an area beneath Honshu where it slides over the top of the oceanic crust. 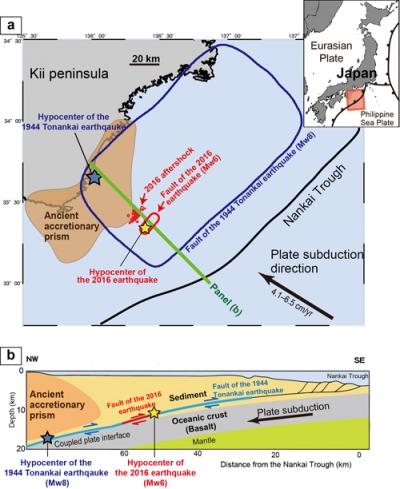 (a) This is a location map showing fault planes of the 2016 earthquake (red) and the 1944 Tonankai earthquake (blue). Yellow and blue stars indicate the hypocenters of the 2016 earthquake and 1944 Tonankai earthquake, respectively. Orange-shaded area indicates ancient accretionary prism. (b) Schematic sections of the accretionary prism in the study area. Fully coupled and partially coupled plate interfaces are shown in red and orange, respectively. Credit: Kyushu University

Highly destructive earthquakes caused by subduction occur because of excessive friction that develops during the sliding process, resulting in a build-up of stress. A sudden release of this stress, a condition called rupturing, leads to the violent shaking felt during an earthquake.

A recent study led by the International Institute for Carbon-Neutral Energy Research (I2CNER) at Kyushu University in Japan, and published in Earth and Planetary Science Letters, now sheds new light on this stress build-up in tectonic plates. The focus was on the Nankai Trough, one of three major subduction zones offshore of Japan.

"Our understanding of the dynamic behavior of plate boundary faults has advanced," the study's lead author Takeshi Tsuji says. "Yet the factors that control the build-up of friction and stress along plate interfaces and in co-seismic zones are less established."

The researchers used advanced 2D and 3D seismic profiles to reveal the detailed structure of the Nankai Trough, particularly of an ancient accretionary prism – a large mass of rock and sediment accumulated in the trough. 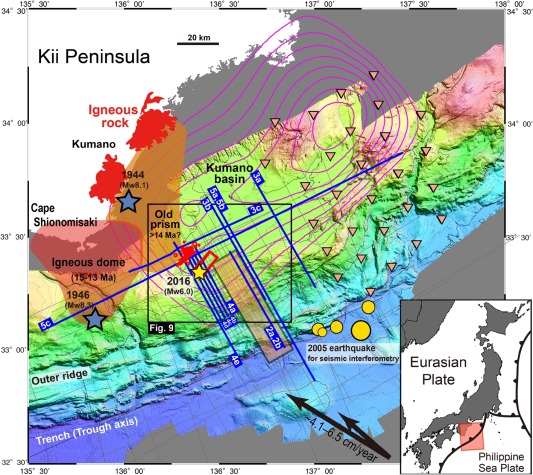 Location map showing tectonic, bathymetric, and geologic features of the study area. Hypocenters of the 2016 Off-Mie earthquake (yellow star) and the 1944 Tonankai earthquake (blue star) are shown along with the coseismic slip distribution of the 1944 earthquake (red contours, 0.5 m intervals; Kikuchi et al., 2003). Blue lines are the locations of seismic survey lines; numbers on the lines indicate the figure numbers of the corresponding seismic profiles. Triangles indicate ocean bottom seismometer used for seismic interferometry analysis, and yellow circles indicate the hypocenters of the 2005 earthquake. Black rectangle indicates the area shown in the image below. Fine lines are other seismic survey lines referred in the study. Credit: Takeshi Tsuji et al. (Elsevier) 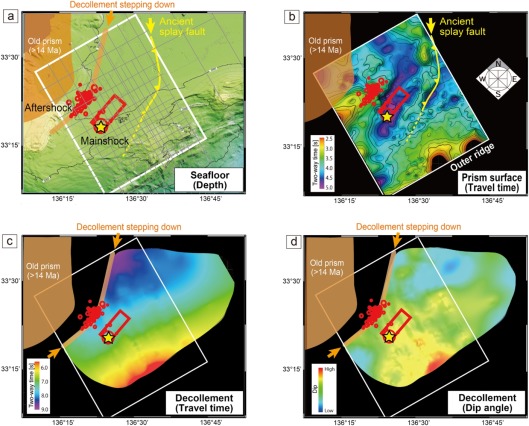 Maps showing the relation between the 2016 Off-Mie earthquake rupture and geologic structures around the Kumano basin. (a) Seafloor bathymetry. The thin gray lines are the locations of seismic profile to extract the horizons shown in panels (b)–(d). (b) Topography of the top surface of the accretionary prism (time domain). (c) Geometry of the plate boundary décollement (time domain). (d) Dip of the plate boundary décollement. Orange area indicates the old accretionary prism or igneous dome. Orange line is where the plate boundary décollement soles onto the top of the oceanic crust. Yellow line is the trace of a splay fault beneath the Kumano forearc basin. Red rectangle and circles are the fault plane and aftershocks, respectively, of the 2016 Off-Mie earthquake (Wallace et al., 2016). Credit: Takeshi Tsuji et al. (Elsevier)

The added mass of this rock and sediment has impeded subduction, ultimately causing stress to build up over time. This stress build-up, and rupturing, was the root cause of the massive 1944 Tonankai earthquake and the smaller Off-Mie earthquake that struck almost the same area on April 1, 2016.

"Along with evidence of frictional obstruction to subduction," Tsuji says, "the fault structure appears to have also impacted earthquake location and behavior. We found that aftershocks of the 2016 quake only occurred in front of the accretionary prism, where stress accumulation is greatest."

The long-term implications of the study hinge on evidence that the pre-existing faults from the 1944 earthquake have strongly influenced the orientation and location of rupturing during the 2016 event, suggesting that large earthquakes in Japan are most likely to occur in this very same region of the Nankai Trough in the future.