Researchers previously thought that X-rays and gamma radiation produced by lightning only lasted for a very short time, about one ten-thousandth of a second. However, a new study reveals that the ionizing radiation of lightning appears to emit much longer than presumed. An afterglow of gamma radiation arises, which lasts up to 10 000 times longer.

This was demonstrated for the first time by computer simulations by researchers from Centrum Wiskunde & Informatica (CWI) in Amsterdam. Their article "TGF afterglows: a new radiation mechanism from thunderstorms" has been published in Geophysical Review Letters.

Terrestrial gamma flashes were discovered about two decades ago. When lightning strikes, electrons are accelerated to very high energies and crashing into air molecules, causing an explosion of gamma radiation, the so-called terrestrial gamma flashes. Bursts of up to a trillion gamma particles can be measured. However, taking these measurements is difficult, since these bursts are very focused and only last for a short time, around 0.0001 seconds. There is still much unknown about how these terrestrial gamma flashes arise and what their role is in the development of lightning. The recently discovered afterglow helps to study this phenomenon. 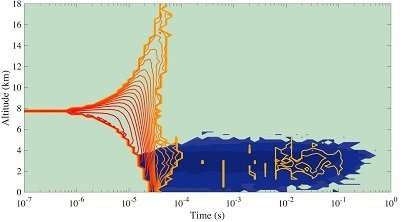 Simulations by CWI researchers showed an afterglow of gamma radiation after lightning, which lasted up to up to 10,000 times longer than previously assumed. The image shows the altitude and time of the radiation. The color (red to yellow) indicates the radiation strength. A terrestrial gamma flash that starts at an altitude of 8 kilometers, creates a cloud of neutrons (blue) at an altitude of 3 kilometers. This cloud, in turn, creates the afterglow. Credit: CWI

"The radiation of a terrestrial gamma flash is so strong that nuclear reactions can take place. When the gamma rays hit the atomic nuclei of the air molecules, the protons and neutrons can be detached. The loose neutrons can wander longer and farther than protons because they don't have electrical charge. After a while, the neutron is captured by another atomic nucleus, which can again produce gamma radiation. The high energy of the gamma ray flash, which is used in releasing neutrons, is, so to speak, temporarily stored in the released neutrons," CWI researcher Casper Rutjes explains.

The CWI researchers calculated that this causes afterglow of gamma radiation, which lasts for 1 000 to 10 000 times longer than the gamma ray flash itself, and which is not focused, but radiates in all directions, which facilitates measurements.

The CWI researchers found hardly any measurements in the scientific literature corresponding to the predictions, because almost none were taken on the right timescale.

"Recently, our simulations have also been confirmed by experiments. Almost simultaneously, G.S. Bowers and collaborators at the University of California-Santa Cruz measured a clear afterglow of gamma ray flashes in Japan after a lightning bolt struck a wind turbine," Researcher Casper Rutjes says.

"The chance of being hit directly by a terrestrial gamma ray flash is very small. If someone in a plane is hit directly by such a narrow terrestrial gamma ray flash, this person will receive a radiation dose approximately equal to 400 times an X-ray picture (30 mSv). The afterglow that we discovered radiates in all directions, increasing the chance that a plane flying above a thunderstorm will be hit, but fortunately, that radiation is much weaker. The radiation dose of the afterglow following lightning is not dangerous—less than what passengers already receive through background radiation when they fly for an hour," Rutjes says about the radiation risk.

The discovery can provide more insight into how lightning develops.