Hurricane "Nate" made its first landfall near the mouth of the Mississippi River, southeastern Louisiana around 00:00 UTC on October 8 (19:00 CDT, October 7) and its second near Biloxi, Mississippi around 05:30 UTC (00:30 CDT) with winds near 140 km/h (85 mph), making it a Category 1 hurricane on the Saffir-Simpson wind scale. This was the first hurricane to make landfall in Mississippi since Katrina in 2005. Nate has since weakened into a tropical depression and it continues weakening as it moves inland over the Deep South toward Tennessee, Kentucky, West Virginia, Pennsylvania and New York.

According to the NWS, Nate was moving toward the coastline at a speed of 45 km/h (28 mph), which is the fastest recorded forward motion of a hurricane in the Gulf of Mexico on record.

Ahead of its arrival, states of emergency were declared in Louisiana, Mississippi, Alabama and the Florida Panhandle ahead of Nate's arrival.

Waves measuring higher than 9.1 m (30 feet) have been measured by a buoy east of the center of Nate around 00:30 UTC. A buoy closer to the center measured sustained winds of over 112 km/h (70 mph) and gusts near 145 km/h (90 mph). Power outages, at least 5 000 customers in southern Alabama, were reported before its second landfall.

There were numerous reports of storm surge flooding along the central Gulf Coast. Between 0.9 and 1.5 m (3 and 5 feet) of storm surge has been reported from St. Bernard County, Louisiana to Mobile County, Alabama. Around 40 roads in southern Mississippi have been flooded due to storm surge.

Major flooding was seen overnight in Biloxi, Mississippi and Mobile, Alabama, and several water rescues. Luckily, there were no injuries or deaths.

A turn toward the northeast with an increase in forward speed is expected during the next couple of days. On the forecast track, Nate's center will continue to move inland across the Deep South, Tennessee Valley, and the central Appalachian Mountains through Monday. 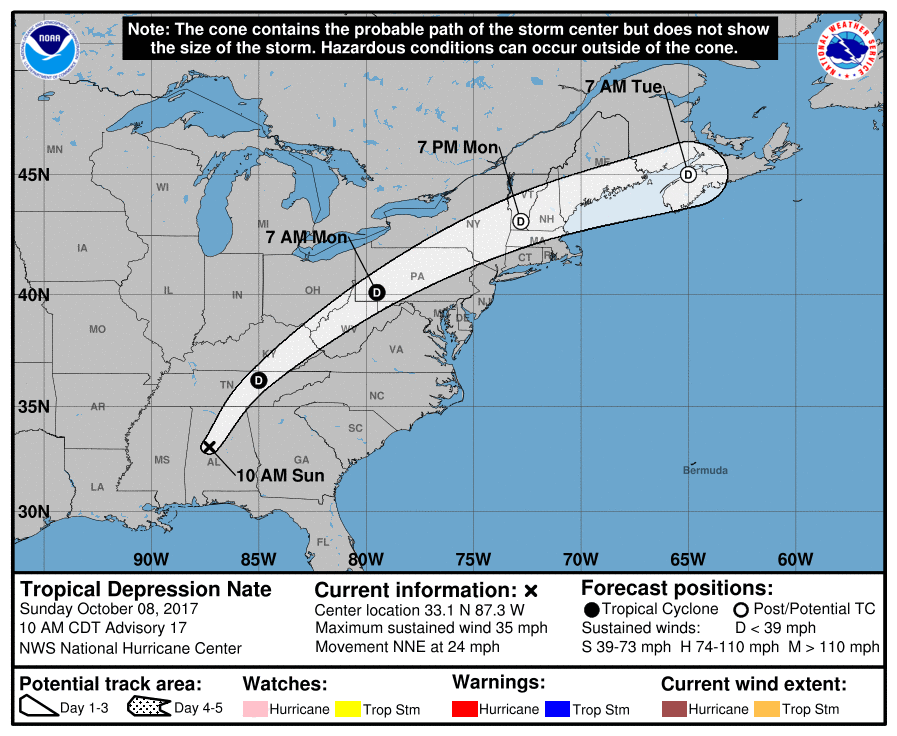 Tropical-storm-force wind gusts are expected over the Florida Panhandle, and portions of Alabama and Georgia through this afternoon.

Water levels remain elevated along portions of the northern Gulf coast, but should gradually subside this afternoon.

Nate is expected to produce the following rain accumulations through Monday:

A couple tornadoes will be possible today, mainly from the Florida Panhandle and eastern Alabama across western and northern Georgia into the western Carolinas.

Swells generated by Nate will affect land areas around the Gulf of Mexico through this evening. These swells are likely to cause life-threatening surf and rip current conditions.