Fast-moving Hurricane "Zeta" made landfall at its peak strength near Cocodrie in southeastern Louisiana at 21:00 UTC on October 28, 2020. Its maximum sustained winds of 175 km/h (110 mph) at the time of landfall placed it on the upper edge of a Category 2 hurricane on the Saffir-Simpson Hurricane Wind Scale and made it the strongest hurricane to make landfall anywhere in the continental US this late in the calendar year since the Halloween Hurricane of 1899. Zeta is also the record-setting 5th named storm to make landfall in Louisiana in 2020, breaking the previous record of 4 Louisiana landfalling named stores set in 2002. ​

Authorities reported at least 2 fatalities on October 29– one person was electrocuted by downed power lines in New Orleans while another died in Biloxi, Mississippi, probably from drowning. By October 30, the number of casualties rose to 6 — in Louisiana, Alabama, Georgia, and Mississippi.

Zeta's effects combined with winter storm which hit the region over the weekend and into the week. Together, they left 507 000 customers without power in Louisiana, 322 000 in Oklahoma, 258 000 in Alabama, 233 000 in Mississippi, and 85 000 in Georgia — more than 1.4 million customers. Before the event was over, more than 2 million customers lost power.

Power outages in Texas and Oklahoma were mostly caused by a record early ice-storm. 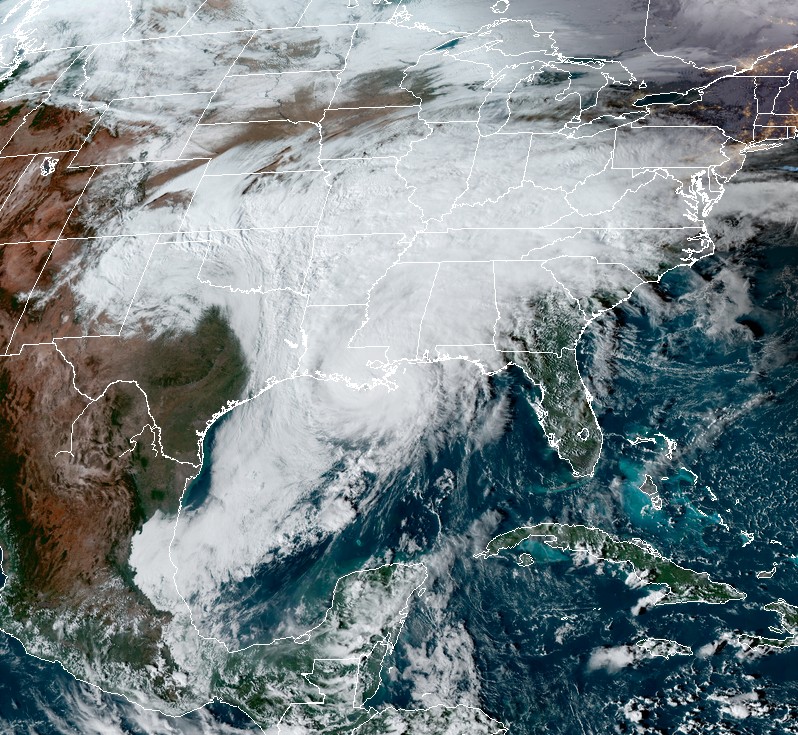 Zeta is also the record-setting 5th named storm to make landfall in Louisiana in 2020, breaking the previous record of 4 Louisiana landfalling named stores set in 2002. The five storms in 2020 are Cristobal, Marco, Laura, Delta and Zeta.

A Tropical Storm Warning is in effect from Navarre to Walton/Bay County Line, Florida. Water levels along the central Gulf Coast will gradually subside throughout the day.

Strong, damaging wind gusts, which could cause tree damage and power outages, will continue to spread well inland across portions of northeastern Alabama, northern Georgia, the Carolinas, and southeastern Virginia today due to Zeta's fast forward speed. Wind gusts could be especially severe across the southern Appalachian Mountains.

Through today, heavy rainfall is expected near and in advance of Zeta from portions of the central Appalachians, Mid-Atlantic and lower to middle Ohio Valley. This rainfall may lead to flash, urban, small stream, and isolated minor river flooding. 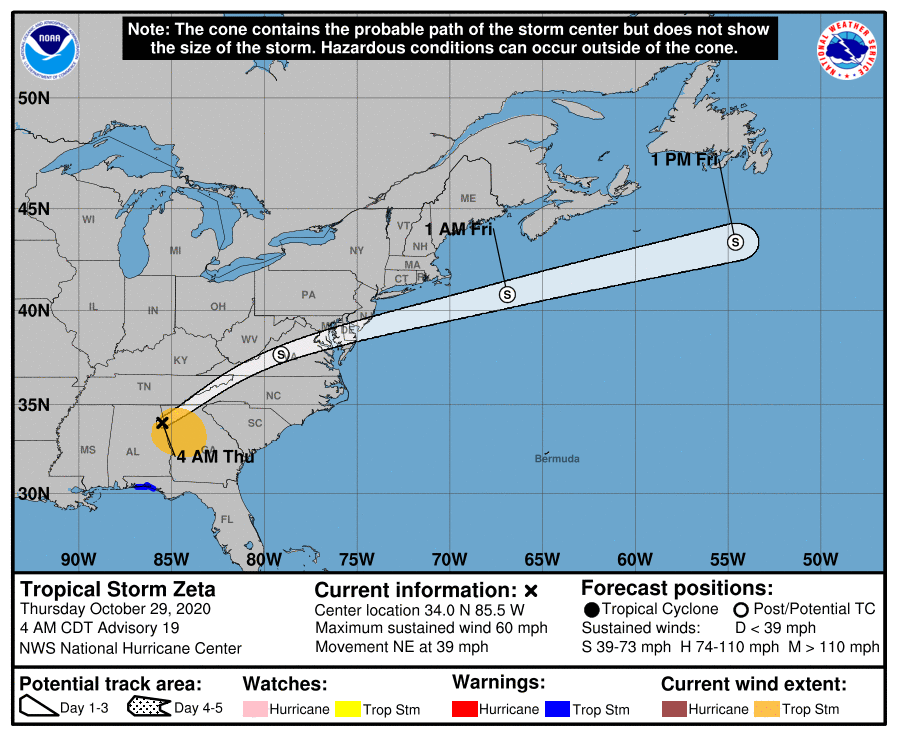 On the forecast track, the center of Zeta will move across portions of the southeastern U.S. this morning, across the Mid-Atlantic states this afternoon, and emerge over the western Atlantic by tonight.

"The tropical storm is forecast to weaken a little more during the next several hours as it remains over land, and Zeta will likely become extratropical by the time it reaches the mid-Atlantic states this afternoon," NHC forecaster Cangialosi noted.

"However, after that time, the models show the cyclone leveling off in strength or perhaps even re-intensifying over the western Atlantic before it becomes absorbed into a frontal zone in 36 to 48 hours."