As of 03:00 UTC on July 24, there are 6 named tropical cyclones across the globe: 3 in East Pacific – tropical storms Hilary, Irwin, and Greg, and 3 in West Pacific – Typhoon "Noru" and tropical storms Sonca and Kulap. Of these 6, only Sonca is expected to make landfall – in central Vietnam sometime after 12:00 UTC on July 25, according to July 24th 03:00 UTC JTWC forecast track.

Tropical Storm "Hilary" is rapidly intensifying and is expected to become a hurricane on Monday and a major hurricane by Tuesday, July 25. At 03:00 UTC on July 24, Hilary's center was located about 605 km (375 miles) south of Manzanillo, Mexico. The system had maximum sustained winds of 110 km/h (70 mph) and was moving WNW at 15 km/h (9 mph) with minimum central pressure of 997 hPa.

Hilary's WNW motion is expected to continue for the next couple of days, and this storm is not expected to affect any land before it dissipates. 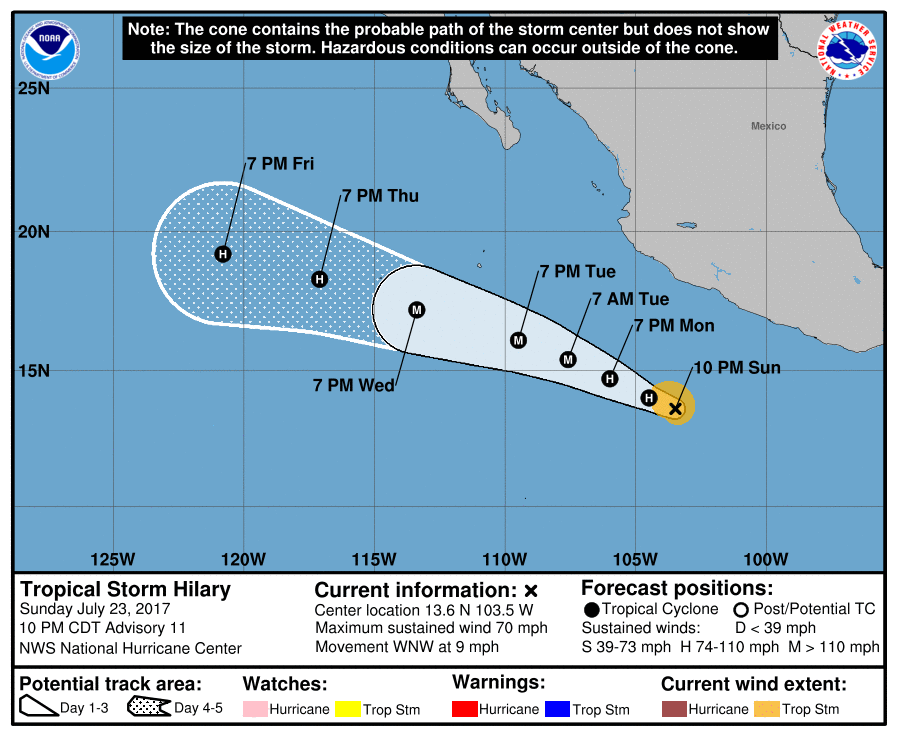 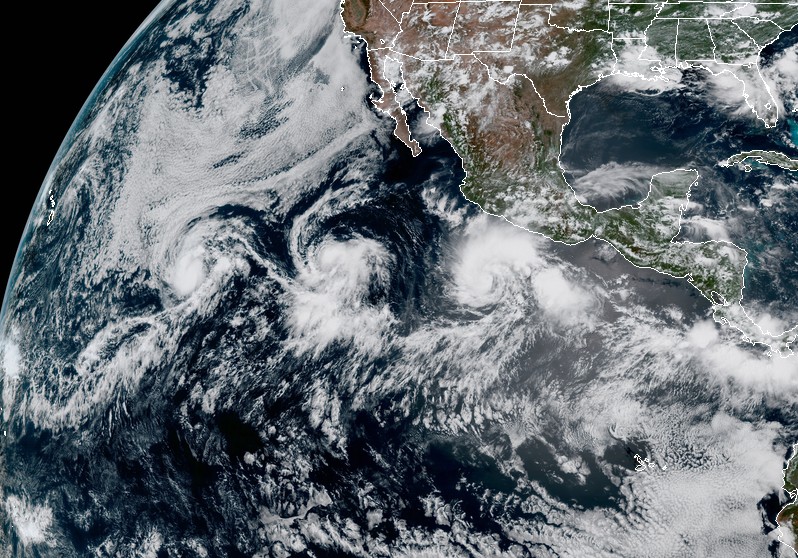 This storm is located west of Hilary and is also expected to become a hurricane today or tomorrow. At 03:00 UTC on July 24, Irwin's center was located 1 180 km (735 miles) SW of the southern tip of Baja California. It had maximum sustained winds of 85 km/h (50 mph) and was moving W at 13 km/h (8 mph). At the time, Irwin had minimum estimated central pressure of 1001 hPa.

Additional strengthening is expected during the next 48 hours, and Irwin is expected to become a hurricane by Tuesday, July 25. 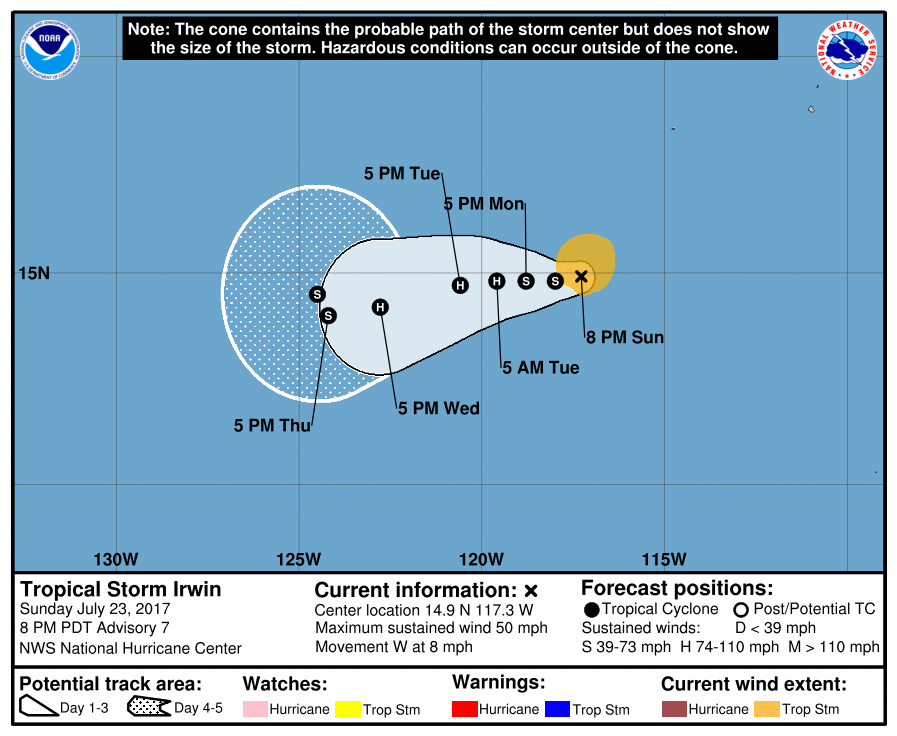 Greg is located 2 450 km (1 520 miles) WSW of the southern tip of Baja California and is holding steady with maximum sustained winds of 85 km/h (50 mph) and minimum central pressure of 1001 hPa, as of 03:00 UTC today. The system is moving west at 22 km/h (14 mph), and this general motion is expected to continue through Monday. A turn toward the WNW at slower forward speed is expected Monday night and Tuesday.

Little change in strength is forecast through Monday, but some weakening is likely Monday night and Tuesday. 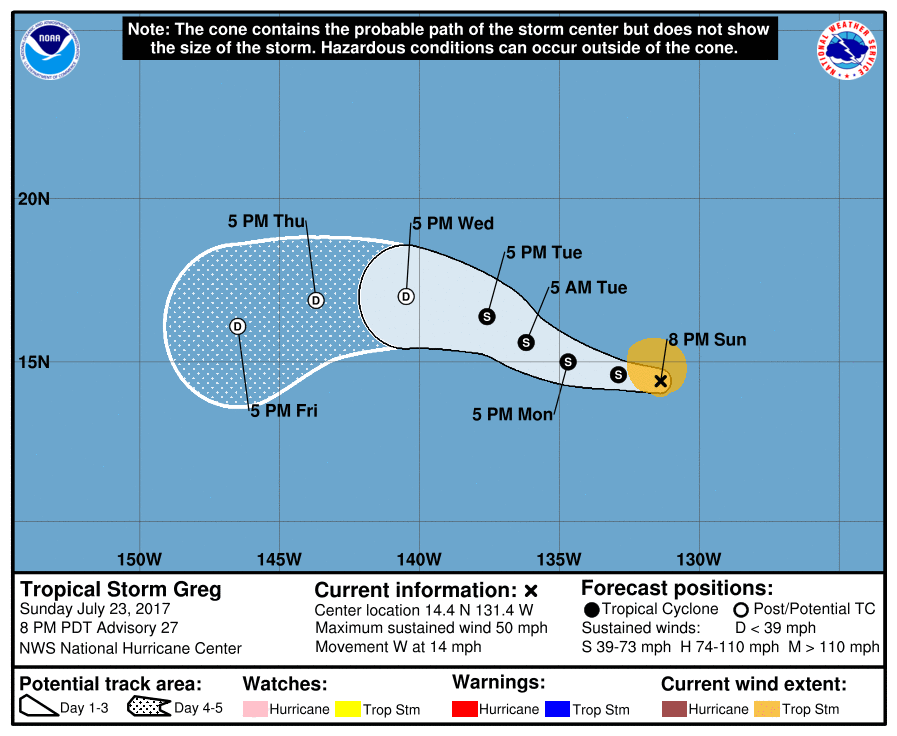 Of the 3 active tropical cyclones in the West Pacific, only one – Sonca – is expected to make landfall. The other two are swirling far away from Japan and are not expected to affect any land before they dissipate.

On the current forecast track, Sonca is expected to make landfall sometime after 12:00 UTC on Tuesday, July 25 in central Vietnam's Quang Binh Province. It will start weakening as it interacts with land and move into Khammouane Province, Laos, pass over it and enter Thailand's Nakhon Phanom province. What's left of it will reach Thailand's Sakon Nakhon Province early July 26 (UTC).

Before Sonca makes Vietnam landfall, it is expected to pass just south of China's Hainan, bringing heavy rain to the already soaked island. 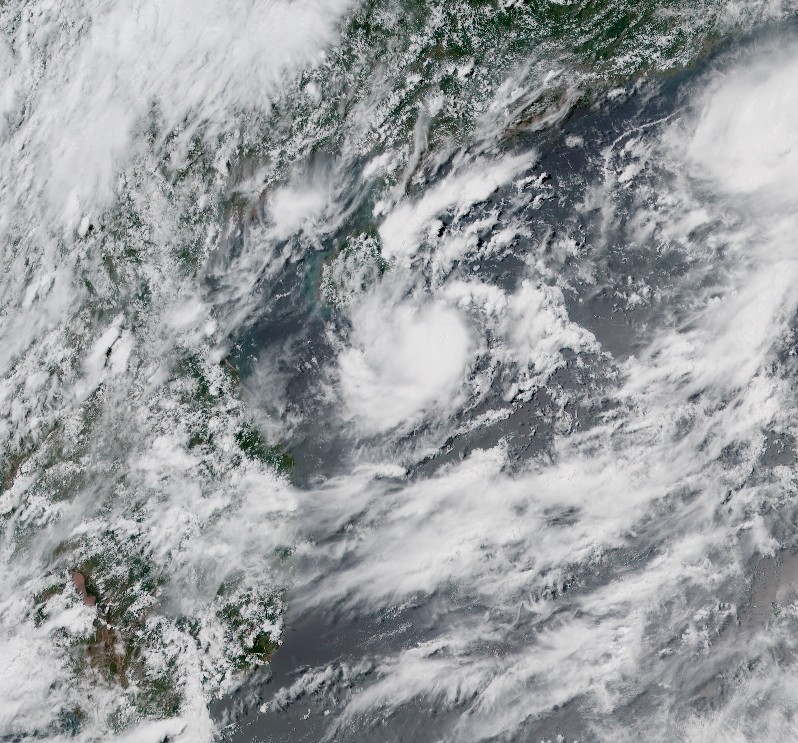 Kulap's center is currently located approximately 1 235 km (767 miles) northeast of Minami Tori Shima, Japan, and has tracked WNW at 18.5 km/h (11.5 mph) over the past 6 hours. Its maximum sustained winds are 83 km/h (51.7 mph), and the system is not expected to further intensify.

This storm is tracking WNW, and this general motion is expected to continue over the next few days as Kulap begins to interact with nearby Typhoon "Noru."

Kulap is expected to completely dissipate by 03:00 UTC on July 26. 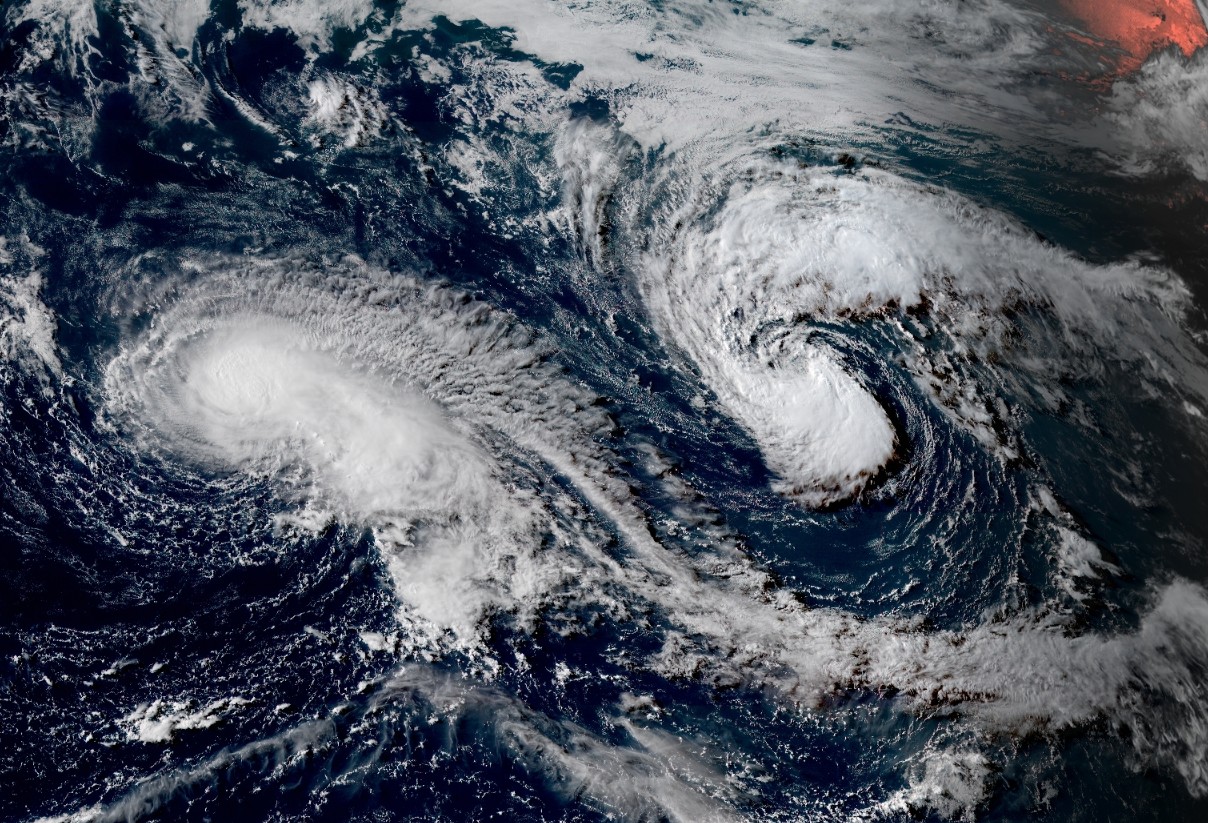 Currently the strongest tropical cyclone globally, Typhoon "Noru" is located 374 km (232 miles) NNW of Minami Tori Shima, Japan (west of Kulap), and has tracked ESE at 14.8 km/h (9.2 mph) over the past 6 hours.

Animated multispectral satellite imagery depicts the re-establishment of a 16.6-km (10 miles) eye feature, and a more symmetric convective structure over the past few hours, signaling the start of another intensification trend. Noru's maximum sustained winds have increased to 166 km/h (103 mph), placing it on the upper edge of Category 2 hurricane equivalent on the Saffir-Simpson wind scale.

Additional intensification is likely over the next 24 hours as environmental conditions remain favorable. Gradual weakening due to cooler sea surface temperatures and stronger vertical wind shear is expected after 24 hours.

Noru is forecast to continue tracking in a cyclonic loop, as a subtropical ridge becomes firmly entrenched over southern Japan, resulting in a turn towards the southwest.