A new study led by a scientist at the National Center for Atmospheric Research (NCAR) has found that the same kind of large-scale planetary waves that meander through Earth's atmosphere driving our weather may also exist on our star and drive space weather. The discovery offers a huge advance in space weather forecasting as we soon might be able to know when solar flares and coronal mass ejections will occur.

Weather on Earth reacts to the influence of jet streams, which blow air in narrow currents around the globe. These movements, a type of Rossby wave, are driven by the planet's rotation and scientists have now found proof of the same mechanism on the Sun.

"The discovery of magnetized Rossby waves on the Sun offers the tantalizing possibility that we can predict space weather much further in advance," said NCAR scientist Scott McIntosh, lead author of the paper to be published next week in the journal Nature Astronomy.

"It’s not a huge surprise that these things exist on the Sun. The cool part is what they do," McIntosh said. "Just like the jet stream and the gulf stream on Earth, these guys on the Sun drive weather — space weather."

Currently, we can forecast short-term effects after a solar flare erupts, but not the appearance of the flare itself. Understanding the solar Rossby waves and the interior process that drive them may allow for predictions of when the solar flares might occur — an invaluable tool for future interplanetary manned missions which will fly through regions unprotected from the damaging energetic particles flares can release, NASA said.

"For a brief period, from 2011 to 2014, scientists had the unprecedented opportunity to see the Sun's entire atmosphere at once," Laura Snider, NCAR Senior Science Writer and Public Information Officer.

During that time, she writes, observations from NASA's Solar Dynamics Observatory (SDO), which sits between the Sun and the Earth, were supplemented by measurements from NASA's Solar TErrestrial RElations Observatory (STEREO) mission, which included two spacecraft orbiting the Sun. Collectively, the three observatories provided a 360-degree view of the Sun until contact was lost with one of the STEREO spacecraft in 2014. McIntosh and his co-authors mined the data collected during the window of full solar coverage to see if the large-scale wave patterns might emerge.

"The main thing is we were able to observe Rossby waves because of STEREO A and STEREO B, in conjunction with SDO, which allowed us to get a full picture of the entire Sun," said co-author William Cramer, a graduate student at Yale University in New Haven, Connecticut.

In this north pole view of the Sun, the brightpoints can be seen circling counter-clockwise, revealing the magnetized Rossby waves flowing beneath the surface.

The results clearly show trains coronal brightpoints (small, luminous features that can be observed on the Sun, directly tied to magnetic activity beneath the surface) slowly circling the Sun traveling westwards and revealing the magnetized Rossby waves flowing beneath the surface. The researchers also found the brightpoints shed light on the solar cycle — the sun’s 22-year activity cycle, driven by the constant movement of magnetic material inside the sun. The brightpoints may serve as a clue, linking how the solar cycle leads to increased numbers of solar flares every 11 years.

"These waves couple activity happening on instantaneous timescales with things that are happening on decadal and longer timescales," McIntosh said. "What this points to, is that something that might at first glance appear random, like flares and coronal mass ejections, are probably governed at some level by the process that is driving the wave." 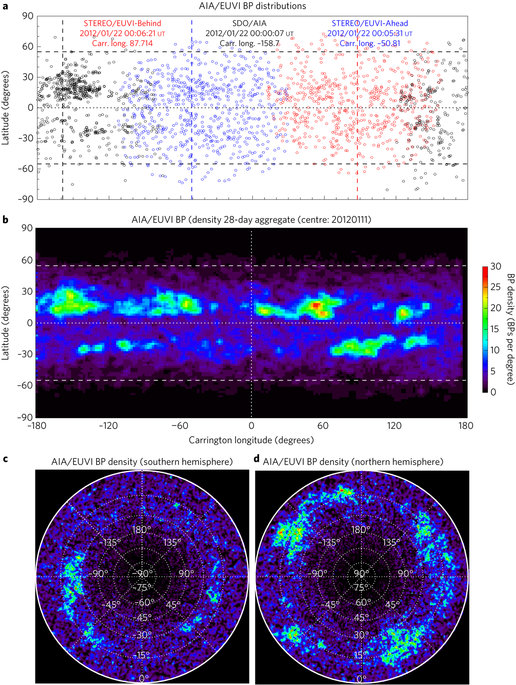 The figure shows a longitude versus latitude snapshot of three-spacecraft BP (coronal brightpoint) identification and solar-rotation-averaged BP density for observations taken at 00:00 UT on 22 January 2012. a, BPs from SDO/AIA (black) and STEREO/EUVI (red, STEREO-Behind; blue, STEREO-Ahead). The vertical dashed lines indicate the central longitudes observed by each spacecraft. b, The comparable, 28-day averaged BP density centered on the same date (on a 2° × 2° grid). c,d, The pole-on projections of the BP density (on a 1° × 1° grid). Panels a and b show horizontal dashed lines at ±55° latitude and a dotted line on the equator for reference. Supplementary Movies 1–4 illustrate the temporal evolution of the panels in this figure. Credit: McIntosh et al. / Nature Astronomy

When terrestrial satellites were first used to observe the jet stream on Earth, it allowed huge advances in predictive weather forecasting. These results show such forecasting advances may also be possible with observations of the entire Sun simultaneously.