Mars Express has captured images of one of the largest outflow channel networks on the Red Planet, providing evidence of ancient mega-flood on Mars, ESA announced today.

The Kasei Valles channel system extends around 3 000 km (1 864 miles) from its source region in Echus Chasma – which lies east of the bulging volcanic region Tharsis and just north of the Valles Marineris canyon system – to its sink in the vast plains of Chryse Planitia.

A combination of volcanism, tectonics, collapse, and subsidence in the Tharsis region led to several massive groundwater releases from Echus Chasma, which subsequently flooded the Kasei Valles region around 3.6 – 3.4 billion years ago. These ancient mega-floods have left their mark on the features seen today.

Sections of Kasei Valles have already been imaged by Mars Express during its 14 years at the Red Planet, but this new image, taken on May 25, 2016, captures a portion right at its mouth.

A 25 km-wide (15 miles) impact crater – Worcester Crater – just left to the center of the main image, has done its best to stand up to the erosive forces of the mega-floods.

While much of the blanket of material surrounding the crater – which was originally thrown out from inside the crater during the impact – has been eroded, the section downstream of the flood has survived. Over time this has led to the overall appearance of a streamlined island, with its stepped topography downstream perhaps suggesting variations in water levels or different flood episodes.

Topography at the mouth of Kasei Valles. Credit: ESA/DLR/EU Berlin

By contrast, the debris blanket surrounding the adjacent crater has remained intact. This suggests the impact producing that crater occurred after the major flooding.

Moreover, the appearance of the debris blanket tells a story on the nature of the subsurface: in this case it points to the floodplain being rich in water or water-ice.

Indeed, the pattern is reminiscent of a ‘splash’: the debris ejected from the crater was rich in water, allowing it to flow more easily. As it slowed, the debris behind it piled up, pushing up the material at its periphery into ramparts. 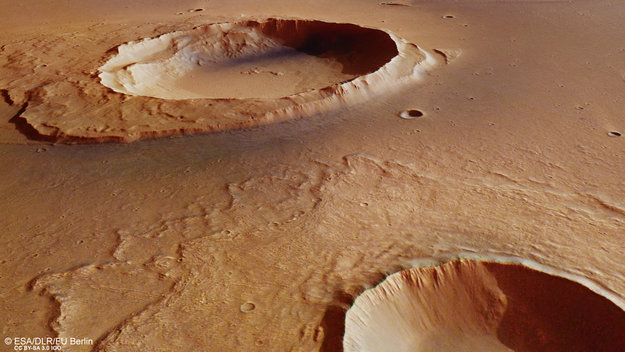 The perspective view shows a close-up of this rampart feature and looks from the associated crater towards the eroded Worcester crater in the background.

The large crater at the northernmost part (right, top) of the main image does not appear to have penetrated as deep as Worcester crater and its neighbor, it is located on a plateau at least 1 km (0.62 miles) higher than the plains below.

Nonetheless, there is a small depression in the center of the crater, which usually implies a weaker layer – such as ice – was buried underneath at the time of the impact.

Close inspection also reveals the faint outline of the crater’s ejecta blanket, including a portion that spilled over onto the plains below.

The ejecta shows an interesting grooved pattern that the other craters in this view seem to be lacking. This suggests a difference in the nature of the impact itself, perhaps either with the energy imparted during the impact, the way in which the ejecta was emplaced from the crater, or in the composition of the plateau material.

Small dendritic channels can be seen all around the plateau, which perhaps hint at the varying flood magnitudes during numerous episodes of flooding.

A number of smaller craters in the flat plains can also be found. These appear to have lighter-coloured ‘tails’ pointing in the opposite direction to the flow of water coming from Kasei Valles.

These craters were formed by impacts that took place after the catastrophic flooding, their delicate tails created by winds blowing in a westwards direction ‘up’ valley. Their raised rims influence wind flow over the crater such that the dust immediately ‘behind’ the crater remains undisturbed in comparison to the surrounding, more exposed, plains.

This scene therefore preserves a record of geological activity spanning billions of years of the Red Planet’s history.