​An earthquake swarm started under Bardarbunga volcano, Iceland during the early morning hours of Wednesday, March 1, 2017. The swarm started at 08:57 with M4.1 (the strongest) and ended at 10:24 UTC. There were no additional earthquakes registered over the next 24 hours.

Bryndís Ýr Gísladóttir, a specialist in natural hazards with the Icelandic Met Office told media that five powerful earthquakes were detected in the caldera of Bardarbunga volcano on March 1, 2017. 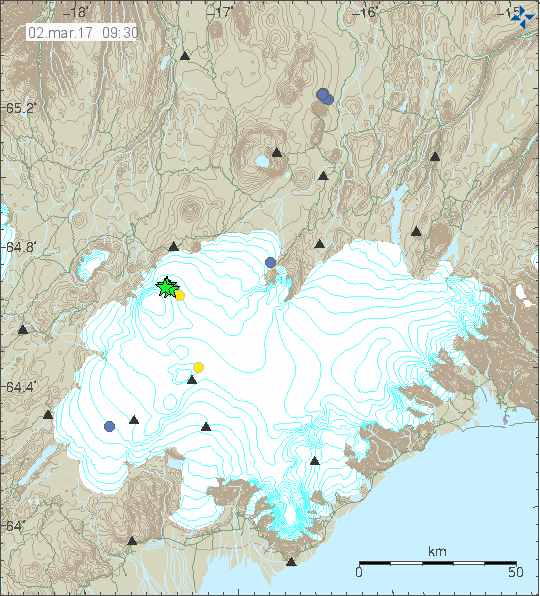 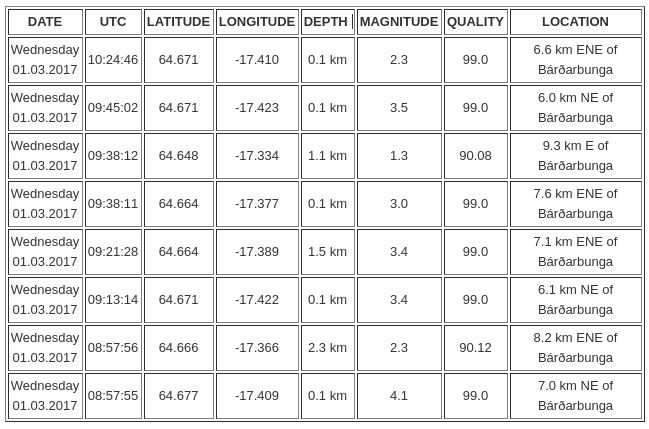 Bryndís insists that there are currently no signs of magma unrest in the area and that earthquakes have been common since the volcanic eruption in Bárðabunga ended in 2015. A similar incident happened in January 2017.

The large central volcano of Bárðarbunga lies beneath the NW part of the Vatnajökull icecap, NW of Grímsvötn volcano, and contains a subglacial 700-m-deep caldera. Related fissure systems include the Veidivötn and Trollagigar fissures, which extend about 100 km SW to near Torfajökull volcano and 50 km NE to near Askja volcano, respectively.

Voluminous fissure eruptions, including one at Thjorsarhraun, which produced the largest known Holocene lava flow on Earth with a volume of more than 21 cu km, have occurred throughout the Holocene into historical time from the Veidivötn fissure system.