A series of strong earthquakes are hitting central Italy since 09:25 UTC on January 18, 2017. Within the first two hours, EMSC registered 21 moderate to strong earthquakes; by 15:52 the agency registered a total of 102 earthquakes. This region is currently under powerful blizzard conditions with parts under more than 2.5 meters (8.2 feet) of snow.

The strongest earthquake so far was M5.7 at a shallow depth of 9 km (5.6 miles), according to the EMSC. USGS registered the same magnitude and a depth of 10 km (6.2 miles). 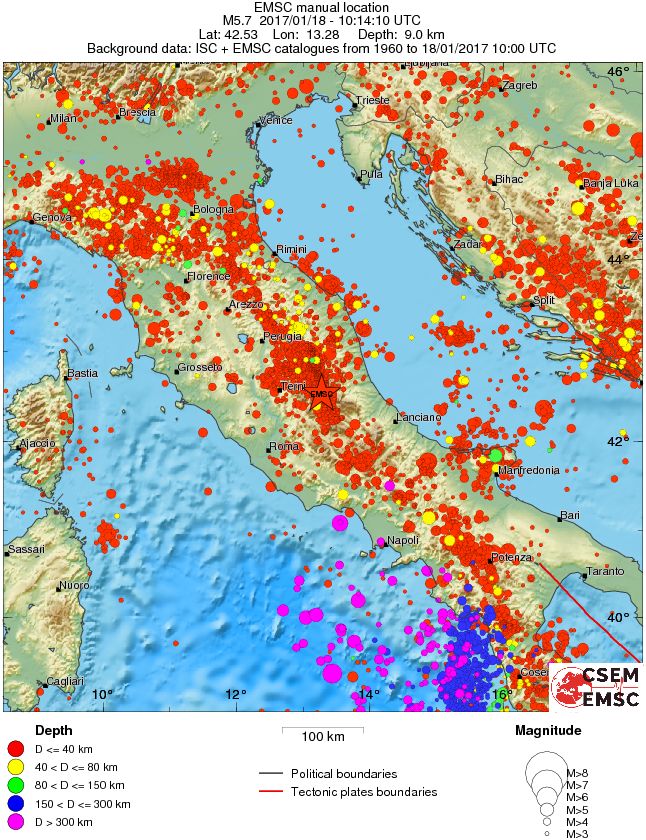 The quakes are hitting the region devastated last year by a series of destructive earthquakes in which nearly 300 people lost their lives.

The M5.7 quake was strongly felt in capital Rome where the metro system and some schools have been evacuated.

There are no immediate reports of casualties or damage but this region is under powerful blizzard conditions and heavy snow which is blocking roads and limiting initial assessment.

"I don't know if we did something bad. That's what I have been asking since yesterday," Amatrice Mayor Sergio Pirozzi told the AFP news agency.

"We have got up to two meters of snow and now another earthquake. What can I say? I have no words."

Ministry of Interior said all public offices in Aquila, as well as all municipalities of the province, will be closed today and tomorrow. This does not include emergency services.

The quakes have triggered a deadly avalanche at the base of the Gran Sasso mountain range near the Rigopiano di Farindola hotel. Up to 30 people are feared dead.

“Around 30 people are unaccounted for, between guests and workers at the Hotel Rigopiano in Farindola,” Fabrizio Curcio, head of Italy’s civil protection department, said.