A very strong Pacific frontal system is expected to rapidly spread moisture back into the West Coast by late Friday night, January 6 and into Saturday morning, January 7. The storm could bring 36 straight hours of heavy rain from Mammoth Mountain to Susanville, raising threats of urban flooding and mudslides. Meteorologists are calling it 'a once-in-10-year event.'

Widespread and potentially heavy rain is expected for much of central and northern California, with more heavy snow in the mountains, the National Weather Service said. Farther north, cold air in place across the Northwest will create the potential for snow and ice accumulations across much of Oregon and Washington.

Rain and snow will continue for the West Coast Saturday night and Sunday, January 8, with precipitation also spreading into the Great Basin, northern Intermountain West, and portions of the northern Rockies.

Along the West Coast, snow levels will gradually rise, with all but the highest elevations of the Sierras changing to rain by Sunday morning. Lingering cold air in the interior valleys of Oregon and Washington will continue the potential for snow and freezing rain for those areas. 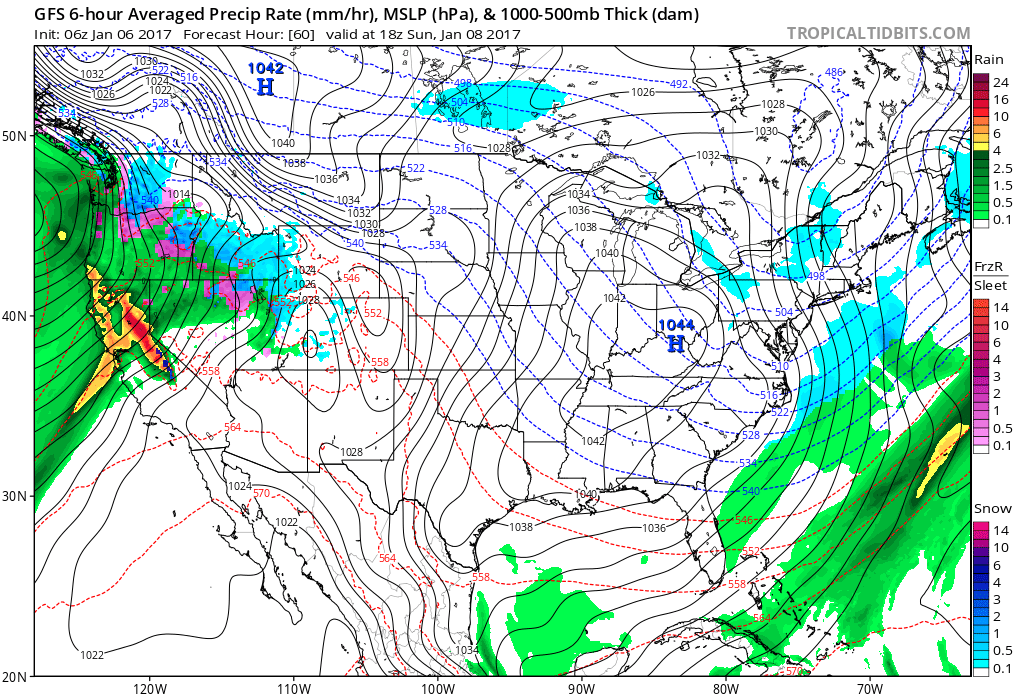 “It’s a once-in-10-year event,” said Zach Tolby, a meteorologist with the National Weather Service in Reno. “It’s the strongest storm we’ve seen in a long time, the kind of setup we look for to get significant flooding.”

The atmospheric river, or “Pineapple Express,” will be felt across much of California this weekend, though rains will be much heavier in the north than in the south, he said for the Los Angeles Times.

Tolby added the storm is packing the same wallop as an atmospheric river that hit Northern California a decade ago that caused US$ 300 million in damage, according to the USGS.

"This weekend’s storm could bring 36 straight hours of heavy rain from Mammoth Mountain to Susanville. In the mountains, the rain could pile onto the snow and trigger early snow melts, feeding extra water into watersheds already swollen from a week of rain."

“A combination of intense rain on saturated soils will lead to excessive runoff,” the National Weather Service said in its weekend forecast.

"The storm this weekend will be the latest in a series of major storms to affect the West Coast this winter," according to AccuWeather Senior Meteorologist Brett Anderson. "The storms are piping a river of moisture into the region from the Pacific Ocean and will go a long way toward drought relief but at a price."

"Cities that can expect multiple days of wet weather from the storm include San Francisco, Sacramento and Fresno, California, as well as Portland, Oregon, and Seattle. Enough rain will fall to cause urban flooding, as well as raise the risk of mudslides. The risk of mudslides will not be limited to recent wildfire areas. A heavy amount of rain will fall and a tremendous amount of water will be released into area streams and rivers."

Meanwhile, Winter Storm Warnings are in place in parts of Alabama and Georgia, including the Atlanta metro area; as well as the southern Appalachians and much of North Carolina.

A developing low pressure system in the northern Gulf of Mexico is expected to bring a range of precipitation types from the lower Mississippi valley to the southern Mid-Atlantic region today into Saturday.

A cold air mass in place will allow for a snow to fall today from portions of the southern plains and lower Mississippi valley east to the foothills of the southern Appalachians and the Piedmont of the Carolinas.

Tonight, snow is expected to spread north across portions of the southern Mid-Atlantic region. Heavy snow is possible for some areas.

Sleet or freezing rain is also possible in the transition zone from snow to rain across portions of the Southeast.

As this low pressure system moves away from the East Coast into the north Atlantic by Saturday afternoon, cold air is expected to linger across areas from the southern plains to the Mid-Atlantic, with afternoon high temperatures 10 to 20 degrees F below average.