Latest update from the Wrfitalia Meteo model for the ongoing Adriatic/Tyrrhenian sea-effect-snowfall over south-central Italy and Sicily calls for excessive snowfall over the coming days. Meanwhile, cold arctic airmass is spreading further south across central Europe and is already far south over the Balkan peninsula and even southern France. At the same time, severe bora winds are affecting Croatian coast and Montenegro. 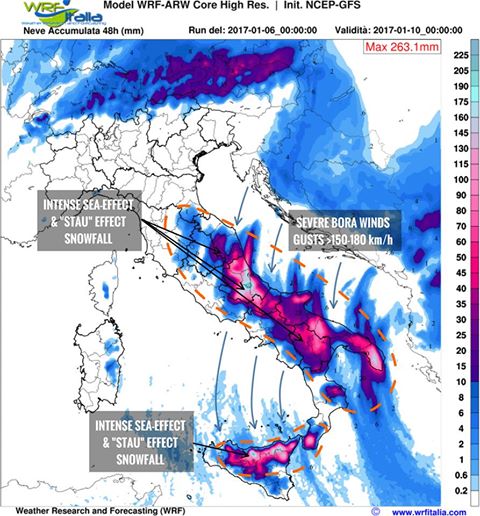 Latest models are hinting Abruzzo as the region with the highest amounts expected.

The following images were taken today in Pescocostanzo, Abruzzo region by Alessio Costabile and Alessandra Spallarossa:

Meanwhile, cold arctic airmass is spreading further south across central Europe and is already far south over the Balkan peninsula and even southern France. At the same time, severe bora winds are hitting the eastern Adriatic.

A deep cyclone is centered over the Aegean sea, maintaining still mild temperatures over the southern Greece and Turkey – this will significantly cool through until the evening, the Severe Weather Europe said.

Meteoalarm, a network of European meteorological services, has issued a Red Alert for extremely cold temperatures for entire Italy and Montenegro, valid January 6 and 7. Red alerts for extremely cold temperatures are in effect throughout Austria and along the entire Croatian coast. Red alerts for strong winds are in effect along the Croatian coast and in Montenegro.