Thailand is experiencing deadly flooding for the second time within a month after heavy monsoon rains flooded its southern provinces. At least 19 people have died and more than 750 000 people have been affected by January 8, 2017. More heavy rain and flooding is expected over the coming days. Meteorological department has instructed all relevant units to urgently drain flood waters from the submerged areas.

The department of disaster prevention and mitigation report, issued Friday, January 6, 2017, said at least 13 provinces have been hit by monsoon rains for nearly a week.

The worst hit was Nakhon Sri Thammarat, where more than 300 mm (11.8 inches) of rain fell in just one day. Flood waters have upended rail tracks and turned roads into rivers. City hall and the main police and fire stations have been flooded.

The airport in the province has been forced to close on Friday after the area received a record 162 mm (6.4 inches) of rain, officials said.

The Thai navy has stationed its largest ship in the South to act as a floating command center, dispatching aid using helicopters and small boats.

Flooding has been affecting parts of the south since January 1. At this time, heavy flooding has also affected parts of the northeast Malaysia, where as many as 25 000 people had to be evacuated.

This is the second time southern Thailand experienced deadly flooding within just one month. At least 14 people died by December 6, after days of heavy rain. Over 582 300 people have been affected. 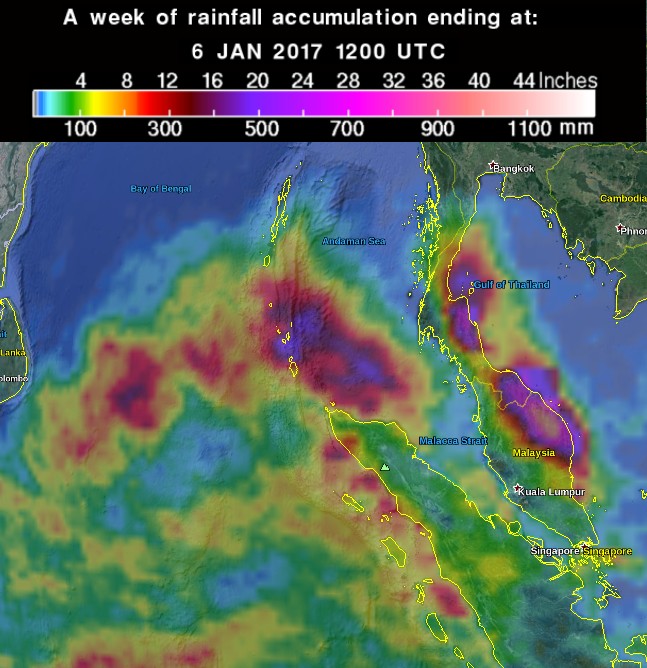 Thai Meteorological Department warned today that the strong northeast monsoon still prevails over the Gulf of Thailand and the South, and the active low pressure over the lower Andaman Sea.

"People should beware of the inshore surge. All ships should proceed with caution, and small boats keep ashore over the next 2 days."