A cold winter chill finally engulfed Alaska, after almost two years of warmer than usual weather conditions. The cold will likely settle the western US over the coming week.

-35 °C (-31 °F) was recorded in Fairbanks on the morning of November 21 (local time), a value which officially ended a two-year long period of higher temperatures. The period of 624 days of warmer weather conditions was the second longest on record, according to media reports. 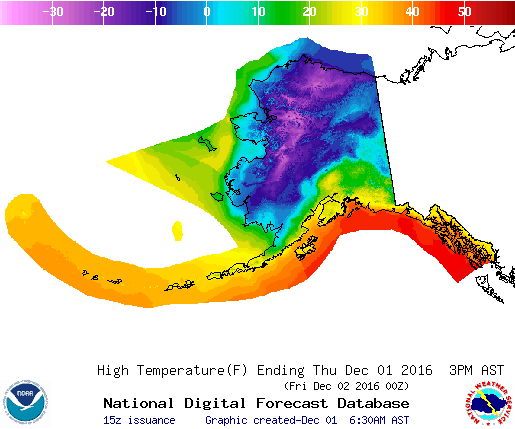 At the same time, -40.5°C (-41°F) was reported in Bettles. This is the first time in a period of almost one year that Alaska's daily temperature index was below the normal.

Between -40 and -42.8°C (-40 and -45°F) was reported in several areas in Alaska on December 1. According to the National Weather Service (NWS), large portions of the state will experience colder than usual conditions over the coming six to ten days, something that happened for the first time since February 2014.

The coldness will begin to descend southward over the coming days, and an intense outbreak of cold air is expected to affect the western US in a period of the next six to eight days.

Large parts of the Rockies and the western Plains are likely to experience temperatures 11 to 16.7°C (20 to 30°F) lower than usual by the middle of the next week. The cold air blast will probably spread toward the eastern US over the next eight to ten days, although it will lose some of its intensity by then.

The collision of the cold and prevailing mild air streams over the US will probably trigger the formation of heavy snowstorms west of the system's center, and intense thunderstorms in the eastern region. The exact movement of the potential storm system cannot be predicted yet, although experts recommend the central US should start to observe the newly-formed situation over the next few days.