Hurricane "Matthew" hit Haiti on October 4, 2016, causing widespread flooding and landslides, major damage to roads, buildings and infrastructure, and power and water shortages. So far 546 deaths and 438 injured people were confirmed, according to the Directorate of Civil Protection (DPC) of Haiti.

UN Office for the Coordination of Humanitarian Affairs (OCHA) reported 806 000 people in need of urgent food assistance and 141 493 displaced across 204 temporary shelters, as of October 28. 540 000 women of reproductive age across the affected regions are in need of some type of protection. So far, only 28% is funded of the $119.8 Flash Appeal, for urgent needs of the 750 000 affected in need of life-saving assistance over the coming two and a half months.

In total, 1.4 million people need humanitarian assistance, of which over 40% are children, and another 40% are women of reproductive age. Humanitarian needs include access to water supplies, education, shelter, child protection, health, and nutrition. In the area where more than 75% of the residents were affected by the hurricane, the people are in urgent food insecurity.

Following Matthew's passage, a deteriorating health status has been reported in the provinces of southwestern Haiti.

“Women, men, and children are in a very vulnerable position. We are particularly concerned by the heightened risk of infectious diseases, cholera, and the deteriorating nutritional status of children under five in the isolated areas affected by the hurricane,” said Chiara Burzio, MSF Emergency Medical Coordinator. 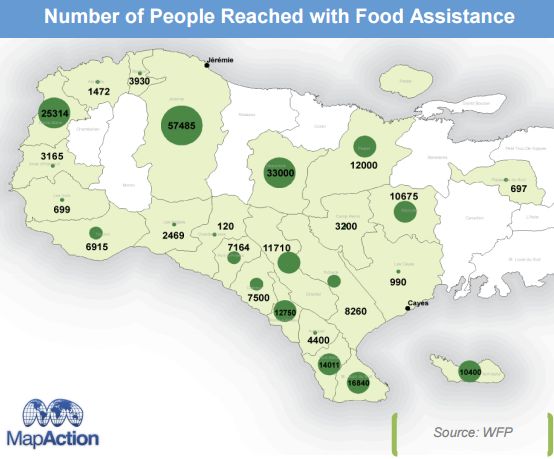 The number of people reached with food assistance by October 28, 2016. Image credit: WFP/OCHA

During the hurricane passage, most crops were destroyed or flooded, and livestock went missing or was reported dead. Most houses in the affected regions lost their roofs and suffered further damage from heavy rainfalls. Water supply network also sustained severe damage.

“The hurricane damaged already weak water supply systems. These systems were further damaged by the floods that followed the hurricane. The people do not have access to clean water”, said Yves Lyre-Marcellus, MSF water and sanitation specialist in Nippes.

According to Chiara Burzio, the MSF Emergency Medical Coordinator, the heightened risk of infectious diseases such as cholera, and deteriorating nutritional status of children is of a particular concern.