Hurricane "Matthew" has left a trail of destruction in Haiti and Cuba, moved over the Bahamas while intensifying into a Category 4 storm and approached the east coast of Florida late on Thursday, October 6, 2016. By 06:00 UTC on October 7, Matthew weakened into a Category 3 hurricane; it was located 70 km (45 miles) E of Vero Beach and 125 km (80 miles) SE of Cape Canaveral, Florida. Some of the outter bands are causing significant trouble.

Matthew was moving toward the NW at 17 km/h (10 mph) as a Category 3 hurricane while intensifying. 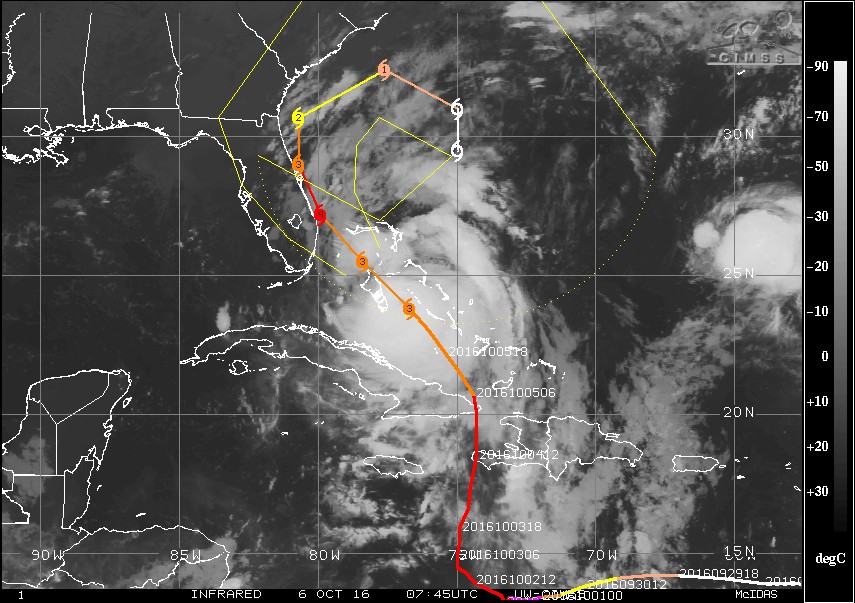 Haiti is now facing the largest humanitarian event since the devastating M7.0 earthquake of 2010.

Wednesday still didn't show the full extent of the damage as assessments have only just begun because of the weather conditions and lack of access.

According to the information gathered by OCHA/UNDAC during an aerial observation mission, hurricane Matthew has severely affected the south part of Haiti, especially the departments of Grand Anse and South, where the wind produced severe damages. A bridge in the town of Petit Goave has collapsed cutting off road access from Port-au-Prince to the south and preventing fast assistance to the affected communities. As of early October 7, media reports mention over 300 deaths.

Cubans were mostly ready for the storm and there were no reports of casualties, but Matthew destroyed everything in its path after making landfall near the town Juaco around 00:00 UTC on October 5.

The famous town of Baracoa, one of the country's oldest and most historic towns, was hit especially hard with many of the houses destroyed. Initial reports from the city mention complete destruction.

Matthew has strengthened into a Category 4 hurricane and passed between Andros Island and New Providence, dangerously close to Nassau, with maximum sustained winds 213 km/h (132 mph).

Hurricane Matthew could have catastrophic impacts and concerns are growing about people that have decided to stay in areas under mandatory evacuations.

"This is like no storm in the record books. Matthew will make history," Bryan Norcross, Sr. Hurricane Specialist, said.

In Haiti, the death toll has risen to 136 people as of late October 6. However, the full scale of destruction is still not known as aid workers are still struggling to reach remote areas of the country.

Marie Alta Jean-Baptiste, the head of the country’s civil protection directorate, warned the death toll was likely to rise.

Aerial footage of the city of Jeremie on the northwestern coast of the country and the capital city of Grand'Anse Department showed hundreds of flattened houses and deserted streets strewn with debris.

Its maximum sustained winds have dropped to 195 km/h (120 mph), making it a Category 3 hurricane again.

Although some additional weakening is forecast during the next 48 hours, Matthew is expected to be a powerful category 3 hurricane as it moves near the coast of Florida.

Outter bands are causing significant trouble along the coast.

At least 175 000 people are already without power.

The combination of a dangerous storm surge and large and destructive waves could raise water levels by as much as the following amounts above normal tide levels:

The water could reach the following heights above ground if the peak surge occurs at the time of high tide: 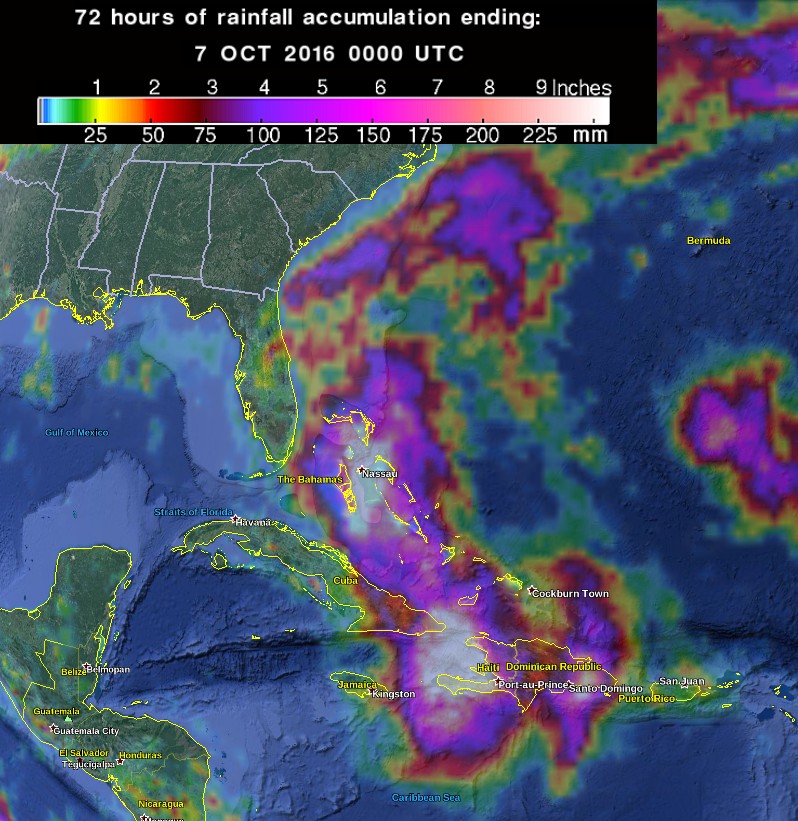