Tropical Storm "Matthew" formed over the Windward Islands on September 28, 2016, as the 13th named storm of the 2016 Atlantic hurricane season. Matthew is expected to become a hurricane by Friday, September 30 and turn toward Jamaica, Haiti, and Cuba.

Matthew became a tropical storm at 15:00 UTC today with its center located only 55 km (35 miles) SE of St Lucia. At 21:00 UTC, it was 110 km (65 miles) W of St Lucia producing locally heavy rain and strong winds in parts of the Lesser Antilles.

NHC forecasters expect westward motion with some decrease in forward speed to continue over the next couple of days. On the forecast track, the center of Matthew will move away from the Windward Islands within the next 12 hours, and be over the eastern and central Caribbean Sea through Friday.

Matthew is expected to become a hurricane by Friday. 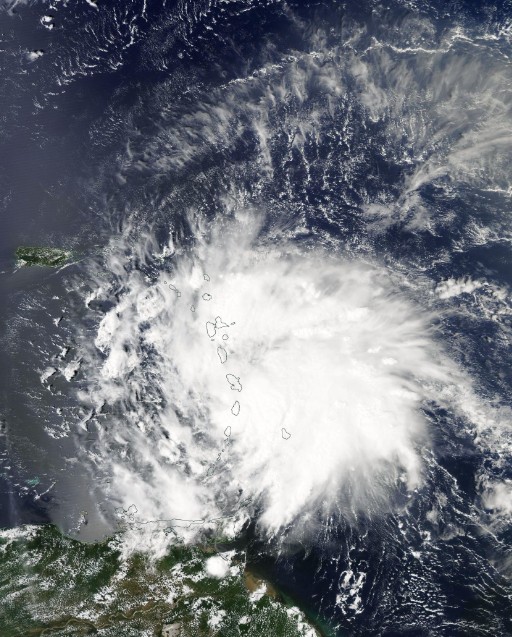 This system is expected to produce total rainfall accumulations of 101.6 mm to 203.2 (4 to 8 inches) across the Windward Islands and southern portions of the Leeward Islands through Thursday. These rains may produce life-threatening flash floods and mud slides, NHC warns.

It is still too early to say what path Matthew will take, but its current track is very similar to that of Hurricane "Hazel" of 1954. Hazel became a major hurricane and stalled over warm Caribbean water. It then passed over Haiti and the Bahamas, killing at least 400 people in Haiti before striking the United States near the border between North and South Carolina, as a Category 4 hurricane.

After causing 95 fatalities in the US, Hazel became extratropical while moving toward Canada and merged with another area of low pressure. The storm then rushed into Canada, killing 81 people, mostly in Toronto.