It was discovered by the SONEAR Observatory at Oliveira, Brazil on August 27, as the 24th asteroid in orbit near Earth discovered by SONEAR.

Astronomer Gianluca Masi of the Virtual Telescope Project captured a sequence of 2016 QA2 images. The video is 113X faster than the real motion:

asteroid #2016QA2 had an extremely close but safe encounter with #Earth earlier today. We did this stunning movie. pic.twitter.com/bPvA6k54iv

Asteroid 2016 QA2 appears to be an Aten asteroid. This is a group of near-Earth asteroids, named after the first of the group 2062 Aten, discovered by Eleanor F. Helin on January 7, 1967. Aten asteroids are defined by having a semi-major axis of less than one astronomical unit (AU), the distance from the Earth to the Sun. They also have an aphelion (furthest distance from the Sun) greater than 0.983 AU.

An Aten orbit need not be entirely contained within Earth's orbit, as nearly all known Aten asteroids have their aphelion greater than 1 AU although their semi-major axis is less than 1 AU. Observation of objects inferior to the Earth's orbit is difficult and this difficulty may be the cause of some sampling bias in the apparent preponderance of eccentric Atens.

Aten asteroids account for only about 6% of the known near-Earth asteroid population. 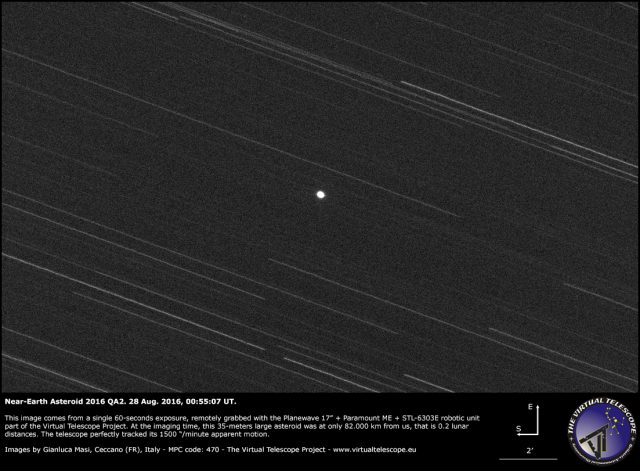 The image above is a 60-seconds exposure, remotely taken with PlaneWave 17″+Paramount ME+SBIG STL-6303E robotic unit available at Virtual Telescope. The robotic mount tracked the extremely fast (1500″/minute) apparent motion of the asteroid, so stars are trailing. The asteroid is perfectly tracked: it is the bright, sharp dot in the center.

"This is with no doubts a super result, showing the amazing capabilities of the Virtual Telescope in tracking extremely demanding asteroids," VT said.

Asteroids the size of 2016 QA2 can pose a significant threat to a town or city.