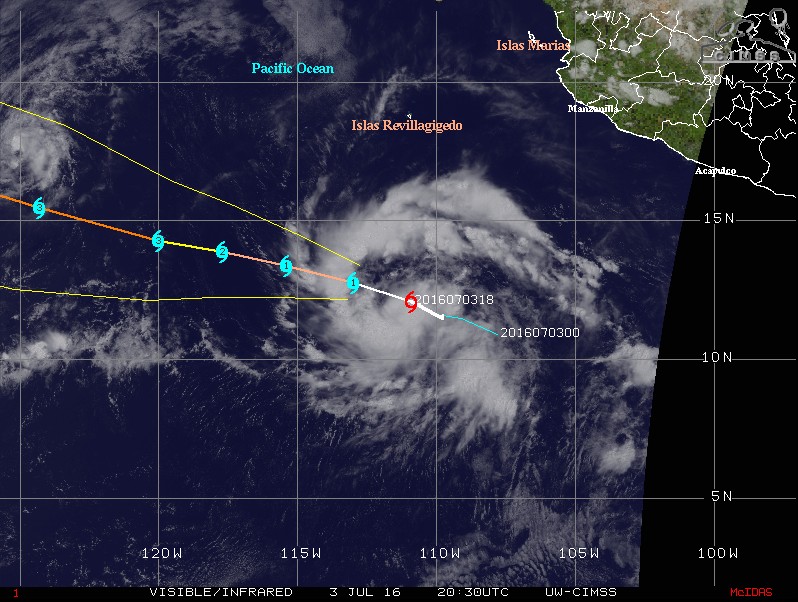 Tropical Depression 03E, later Blas, formed at 03:00 UTC on July 2 east of Agatha and by 09:00 UTC strengthened into a tropical storm. While Agatha was the latest first named storm in the eastern Pacific since Ava of 1969, Blas and Agatha together mark the first time on record that two named storms have formed in northeast Pacific between July 2 – 3.

Blas is now much bigger than Agatha and on track to strengthen into a hurricane over the next couple of days. At the same time, Agatha is peaking and is expected to start weakening soon and become a remnant low in a couple of days. 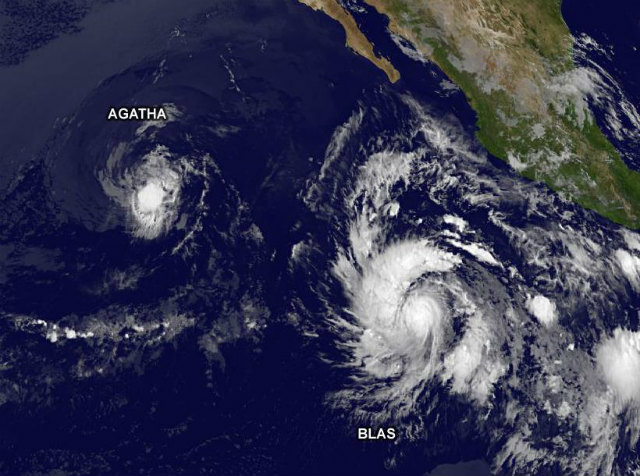 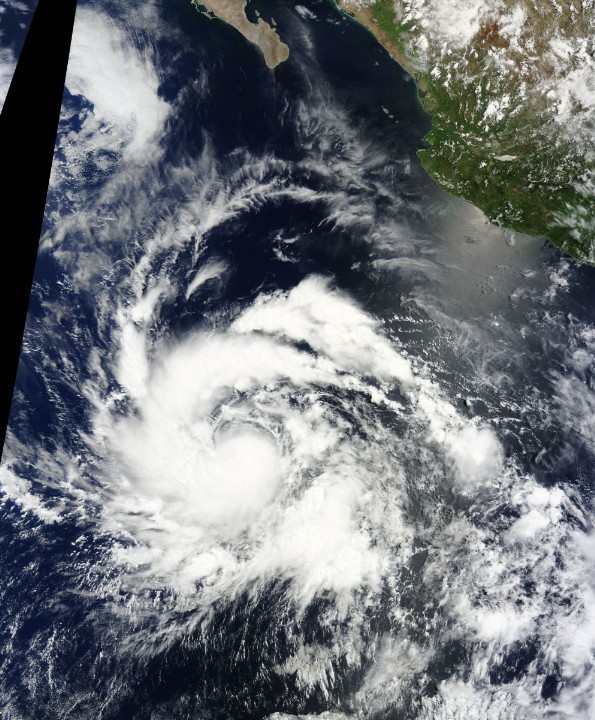 Blas is expected to continue strengthening and to become a hurricane on Monday, July 4 and a major hurricane by Tuesday, July 5.

Tropical-storm-force winds extend outward up to 110 km (70 miles) from the center.

By 21:00 UTC on July 7, Blas should be moving over steadily cooler waters and entering a drier and more stable environment. This should promote a weakening trend that will likely become rapid.

At 15:00 UTC on Monday, July 4, Blas officially became the first hurricane of the 2016 eastern Pacific hurricane season. Blas quickly reached peak intensity at Category 4 strength on July 6, and weakened to a Category 3 hurricane soon after. Later the same day, it became an annular tropical cyclone while maintaining Category 3 intensity. 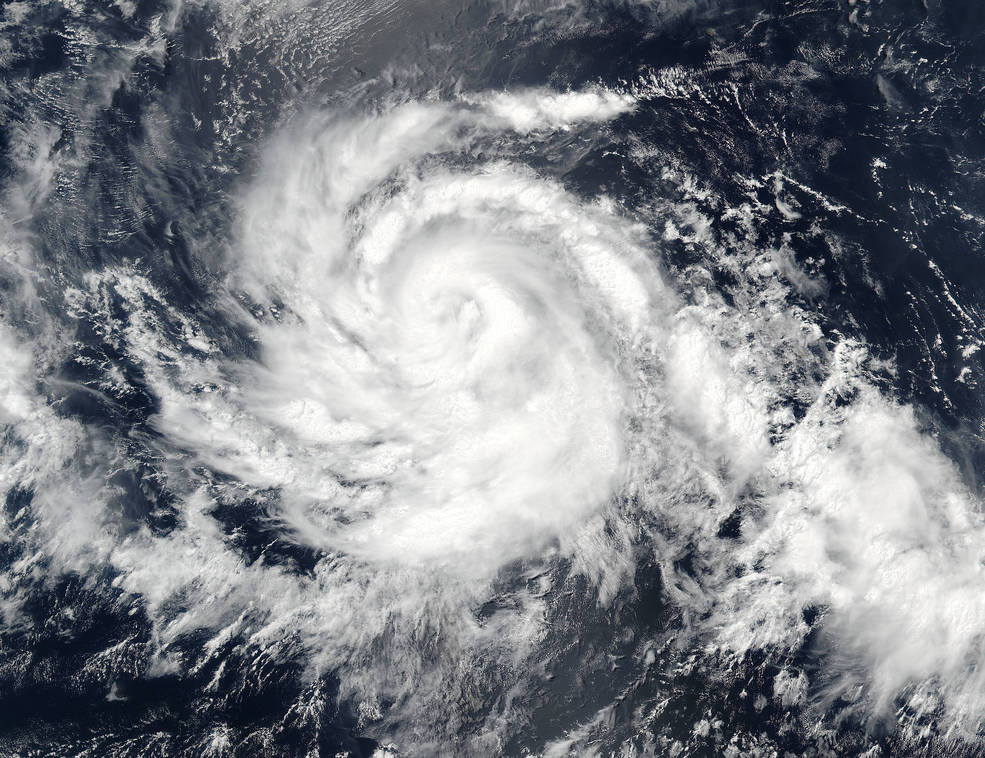 At 15:00 UTC on Wednesday, July 6, 2016, the center of Hurricane "Blas" was located about 1 685 km (1 045 miles) west-southwest of the southern tip of Baja California. The system was located far from land so there were no coastal watches or warnings in effect. It was moving toward the west-northwest near 19 km/h (12 mph), and this general motion is expected to continue over the next couple of days.

Maximum sustained winds were near 205 km/h (125 mph) making Blas a category 3 hurricane on the Saffir-Simpson Hurricane Wind Scale. The National Hurricane Center (NHC) said that slow weakening is forecast tonight and Thursday, followed by a faster rate of weakening by Friday, July 8. The estimated minimum central pressure at the time was 956 millibars. 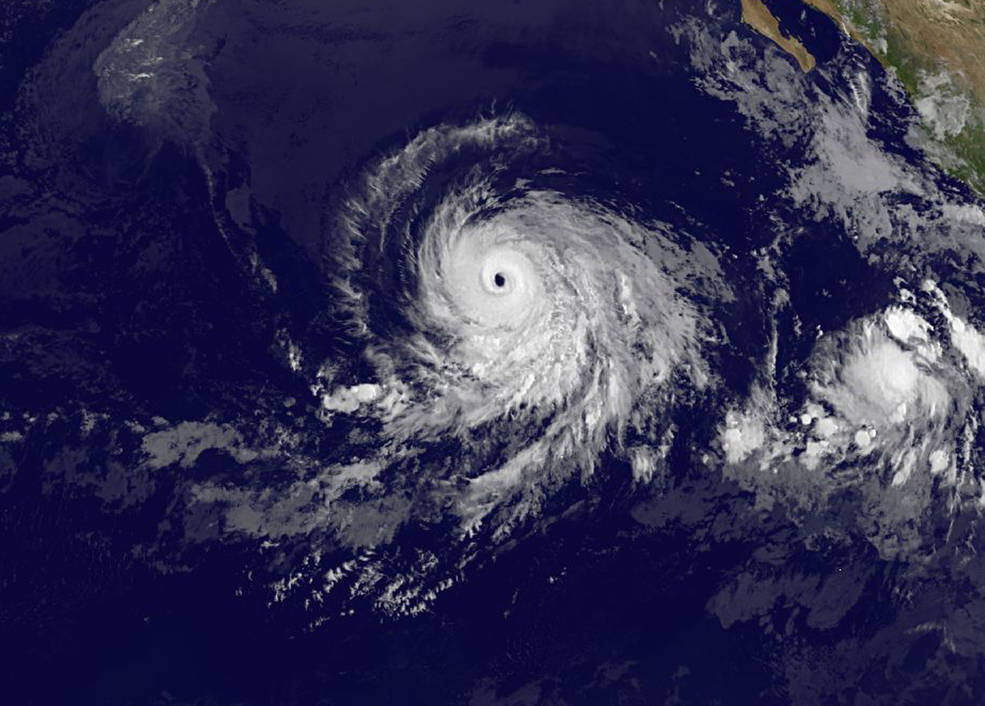 This visible image of Blas from NOAA's GOES-East satellite was taken on July 7 at 12:00 UTC. Credits: NASA/NOAA GOES Project

Blas degenerated into a remnant low on July 10.

At the onset of 2016, the dissipating Tropical Depression Nine-C left behind a large area of moisture across the equatorial Pacific. A powerful westerly wind burst—a feature commonly associated with strong El Niño events—spurred cyclogenesis within the disturbance, resulting in the formation of an area of low pressure. Fueled by unusually high sea surface temperatures, estimated at 29.5 °C (85.1 °F), the system gradually coalesced into a tropical depression on January 7. This marked the earliest formation of a tropical cyclone on record in the Central Pacific, surpassing 1989's Tropical Storm "Winona" by six days. It soon strengthened into a tropical storm, receiving the name Pali, becoming the earliest such system in the northeastern Pacific on record. Then, on January 11, Pali strengthened into a Category 1 hurricane, becoming the earliest hurricane on record in the northeast Pacific basin, beating the previous record set by Hurricane Ekeka in 1992. Pali reached a minimum latitude of 2.0°N, making it the lowest latitude tropical cyclone on record in the Western Hemisphere, surpassing Tropical Depression Nine-C which attained a minimum latitude of 2.2°N just two weeks prior. On January 12, Pali strengthened further into a Category 2 hurricane. During the next few days, Pali rapidly weakened while turning back towards the south-southeast, before weakening into a remnant low early on January 15. Unrelated to Pali, Hurricane Alex developed over the Atlantic during the last few days of Pali's existence. This marked the first known occurrence of simultaneous January tropical cyclones between the two basins. (Source)