Torrentail rainfalls which started in Ghana on June 9, 2016, caused widespread flooding in Accra. This happened exactly one year after devastating floods and fires killed more than 150 people, and residents are worried it could happen again. Ghana Meteorological Agency announced more rainfall over the next few days.

Between 140 and 190 mm (5.5 and 7.5 inches) of rainfall was recorded in a 24 hour period between June 9 and 10 across parts of Accra. Most of the precipitation reportedly fell within the first 3 to 6 hours. According to the World Meteorological Organization (WMO), Accra usually receives about 221 mm (8.7 inches) throughout the entire month of June. 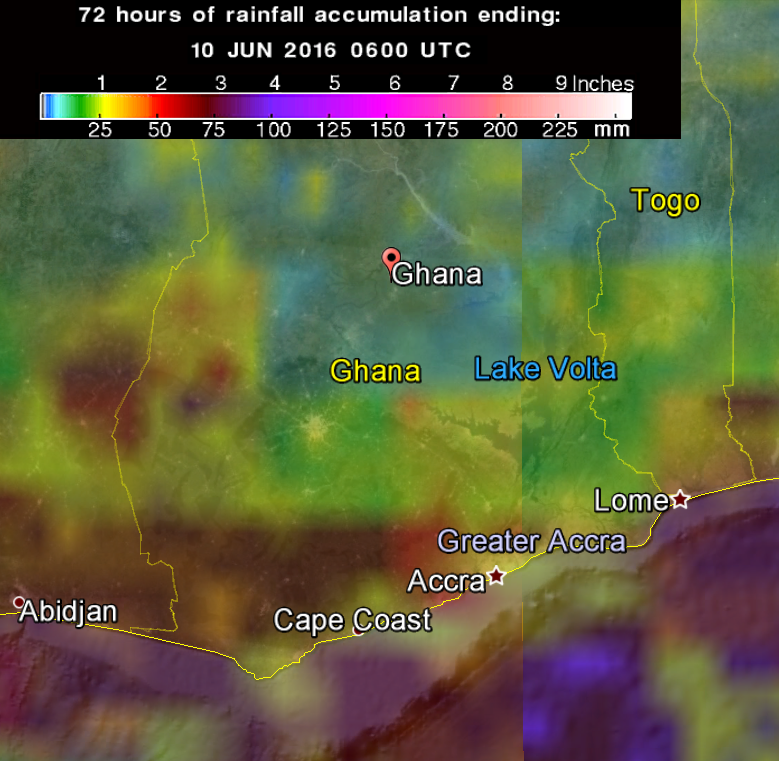 The Odaw River has overflown its banks and drainage channels including the Onyasia, Odaw, and Nima. Flooded regions of Accra include Kwame Nkrumah Circle, portions of Teshie, Airport Residential, Dzorwulu, Achimota, and Tse Addo. The National Disaster Management Organisation (NADMO) urged the people to move to higher grounds from the flood-prone areas. Rescue and emergency services are engaged across the affected areas.

But I thought Bro Oko Vanderpuije said Accra was "resilient" to flood. #AccraFloods
How can you be lying like that? pic.twitter.com/5KaCc1UBQQ

One person was reported missing, in Tema, several kilometers from Accra.

Accra was devastated by floods and fire in 2015. Heavy June rainfalls triggered severe flooding, and a major explosion which occurred at a petrol station on June 3, killed 159 people and left 60 injured. Following the disastrous event, President Mahama announced the plans for future flood prevention, including unblocking drainage systems and waterways: "Drastic steps are necessary here if we are to permanently address this perennial problem. We will intensify efforts to expand and modernize our drainage system."

Inadequate drainage systems, frequently blocked by trash and other debris and illegal building on flood plains are some of the most important causes for aggravating the flood problems. Alfred Oko Vanderpuije, the Mayor of Accra, stated about 45% of the total works on drains and river dredging are completed.