A team of scientists led by experts from the Southwest Research Institute (SwRI), Texas has utilized the radar data collected by NASA's Mars Reconnaissance Orbiter to discover the evidence of an ice age at the Martian north pole. According to researchers, the red planet's ice ages are driven by similar processes occurring on Earth, that is, long-term repetitive changes of the planet's orbit and tilt that affect the amount of incoming solar radiation.

Mars experiences similar annual rotation, seasonal cycles as our planet and possibly undergoes more pronounced longer cycles, because Mars' tilt changes by as much as 60 ° on a timescale between hundreds of thousands to millions of years. Earth' tilt varies by approximately only 2 ° in the same time span. This variability on Mars directly impacts the amount of sunlight that reaches the surface, and the stability of ice at all latitudes. 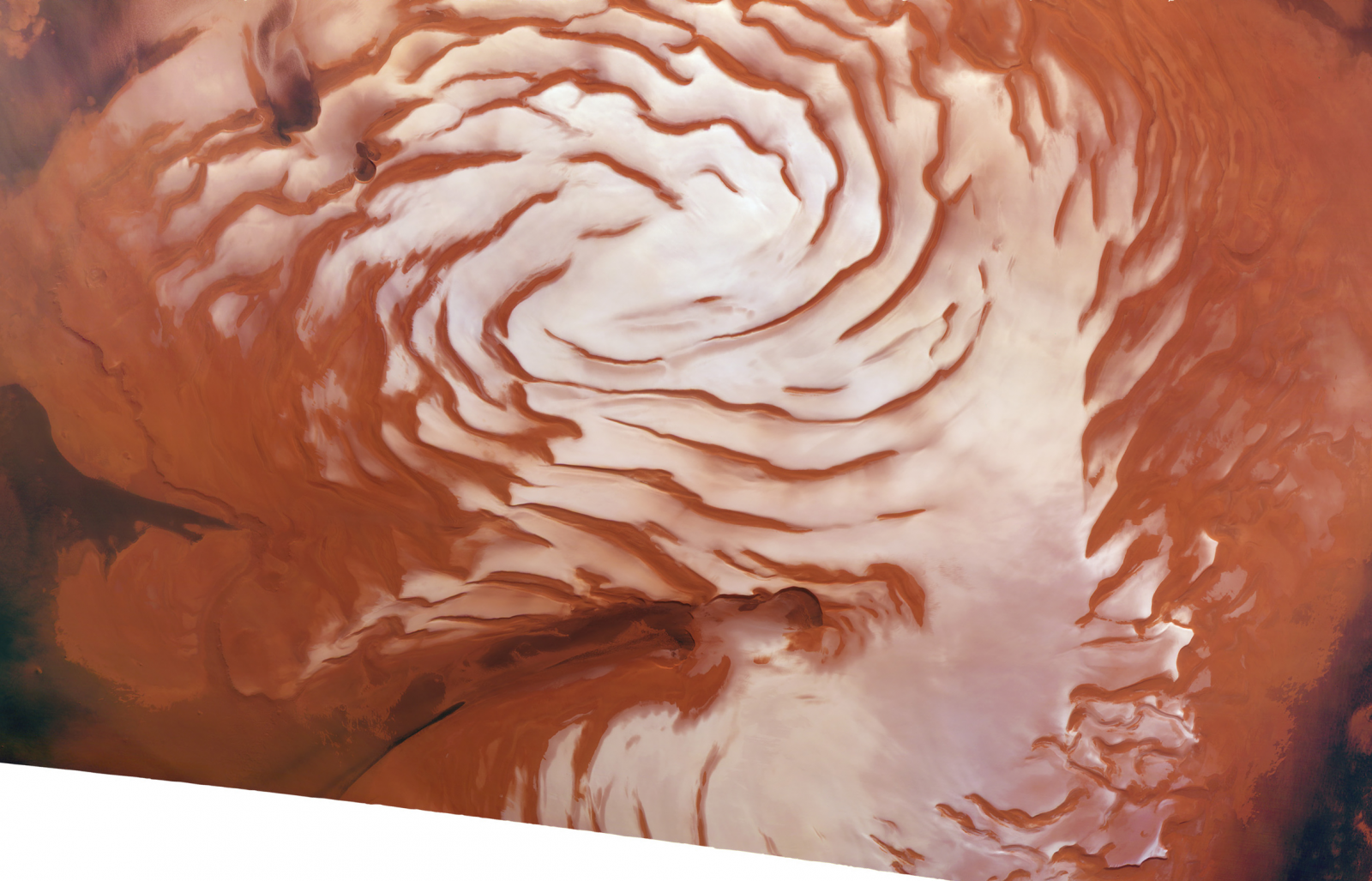 The mosaic image, produced with the High-Resolution Stereo Camera (HRSC) onboard ESA’s Mars Express (MEx) spacecraft, shows spiral features that were used in interpreting the climate signal of ice age advancement and retreat. This image was cropped from a two-image true-color mosaic acquired by HRSC and specially processed by Dominik Neu and Patrick C. McGuire from the Freie Universität Berlin and the MEx/HRSC teams for this release. Image credit: ESA/DLR/FU-Berlin

“We found an accelerated accumulation rate of ice in the uppermost 100 to 300 meters (3.3 to 984.3 feet) of the polar cap. The volume and thickness of ice match model predictions from the early 2000s. Radar observations of the ice cap provide a detailed history of ice accumulation and erosion associated with climate change,” said Dr. Isaac Smith, a postdoctoral researcher at SwRI and lead author of the research.

“Because the climate on Mars fluctuates with larger swings in axial tilt, and ice will distribute differently for each swing, Mars would look substantially different in the past than it does now. Furthermore, because Mars has no oceans at present, it represents a simplified ‘laboratory’ for understanding climate science on Earth,” he added.

Using two-dimensional radar cross-sectional images collected by the Shallow Radar instrument on Mars Reconnaissance Orbiter, SwRI scientists discovered evidence for an ice age in the Mars’ polar cap. The top 100- to 300-meter layers of the ice show a stark change in properties between an ice age and an interglacial period. In the highlighted boxes, layers below the blue line show migration of spiral features toward the left (yellow and orange lines). Above the blue line, those features disappear or reverse migration direction, an indication of changes in accumulation rate and wind patterns associated with climate change. In other regions of the polar cap, the blue line is associated with widespread erosion, an event that corresponded with an ice age. Image credit: Southwest Research Institute 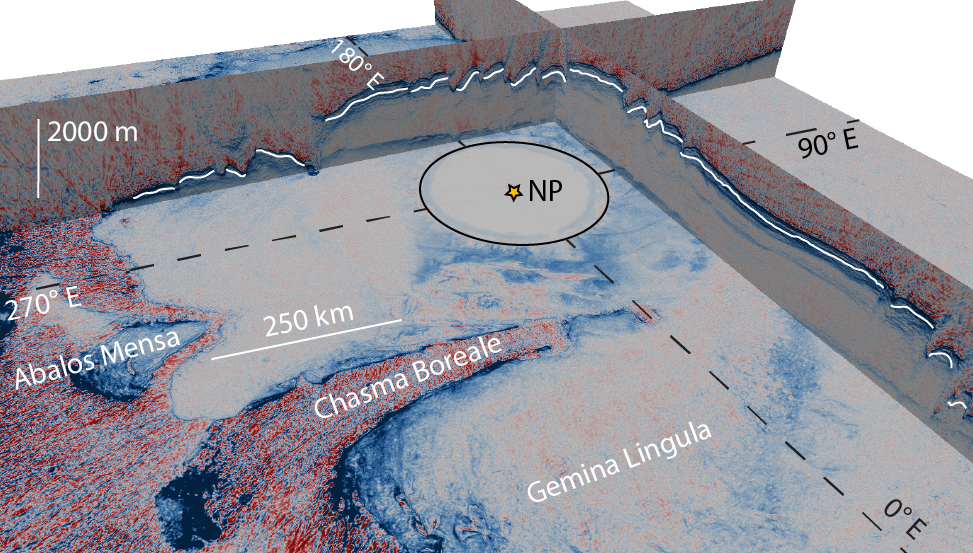 SwRI scientists used this 3-D perspective view of Mars’ polar ice cap to look for signs of climate change. Similar to profile views in two dimensions, the white line highlights the exact level in the ice where a change in climate occurred. On Mars, ice transfers from the north pole to the mid-latitudes during an ice age, leaving behind evidence of erosion. Subsequent accumulation (above the white line) indicates that the ice age was over. Image credit: Fritz Foss and Nathaniel Putzig

The measurements of ice thickness indicate that approximately 87 000 cubic kilometers (20 872 cubic miles) of ice had accumulated at the planet's poles since the last ice age ended, about 370 000 years ago. The volume of accumulated material is equivalent to a 60-cm (1.96 feet) thick layer spread uniformly across the surface. The research results are capable of providing a deeper understanding of the accumulation history of the polar deposits in relation to the planets movements and are expected to support further modeling of the Martian climate.

“Studying ice on Mars also is important to the future of human exploration of the Red Planet. Water will be a critical resource for a Martian outpost,” concluded Smith.

Featured image: The mosaic image, produced with the High-Resolution Stereo Camera (HRSC) onboard ESA’s Mars Express (MEx) spacecraft, shows spiral features that were used in interpreting the climate signal of ice age advancement and retreat. This image was cropped from a two-image true-color mosaic acquired by HRSC and specially processed by Dominik Neu and Patrick C. McGuire from the Freie Universität Berlin and the MEx/HRSC teams for this release. Image credit: ESA/DLR/FU-Berlin