A new historical review published in the Seismological Research Letters shows the human-triggered earthquake activity has been frequent and widespread across Texas, US, since at least 1925. The number of quakes of M3.0 or stronger, mainly induced by the oil and gas operations, has increased from only two to 12 per year since 2008, according to the study.

The new research results strongly reject the idea that human activity isn't responsible for earthquake activity observed in Texas, and it doesn't distinguish between practices that are responsible for it.

"I think we were all looking for what I call the silver bullet, supposing we can find out what kinds of practices were causing the induced earthquakes, to advise companies or regulators. But that silver bullet isn't here," said Cliff Frohlich, the study's lead author, senior research scientist and associate director at the Institute for Geophysics at the University of Texas at Austin.

The change observed in the region since 2008 appears to stem from an increase in earthquakes reported within a radius of 1-3 km (0.6-1.9 miles) of petroleum production wastewater disposal wells, where the water gets injected monthly at a high rate.

Some of the recent earthquakes were recorded in the area of the Dallas-Fort Worth International Airport between 2008 and 2013, in Timpson during May 2012, and near Azle, where the earthquake sequence began in 2013.

The study suggests the induced seismicity could have a rich and widespread history in Texas. The scientists were surprised in the constant changing in oil practices over the years, and they suspect these changes have likely affected the types of earthquakes. According to Frohlich, during the 1920s and 1930s "they'd find an oilfield, and hundreds of wells would be drilled, and they'd suck oil out of the ground as fast as they could, and there would be slumps". The slumps would shake the earth during the rapid extraction of oil from the underground. 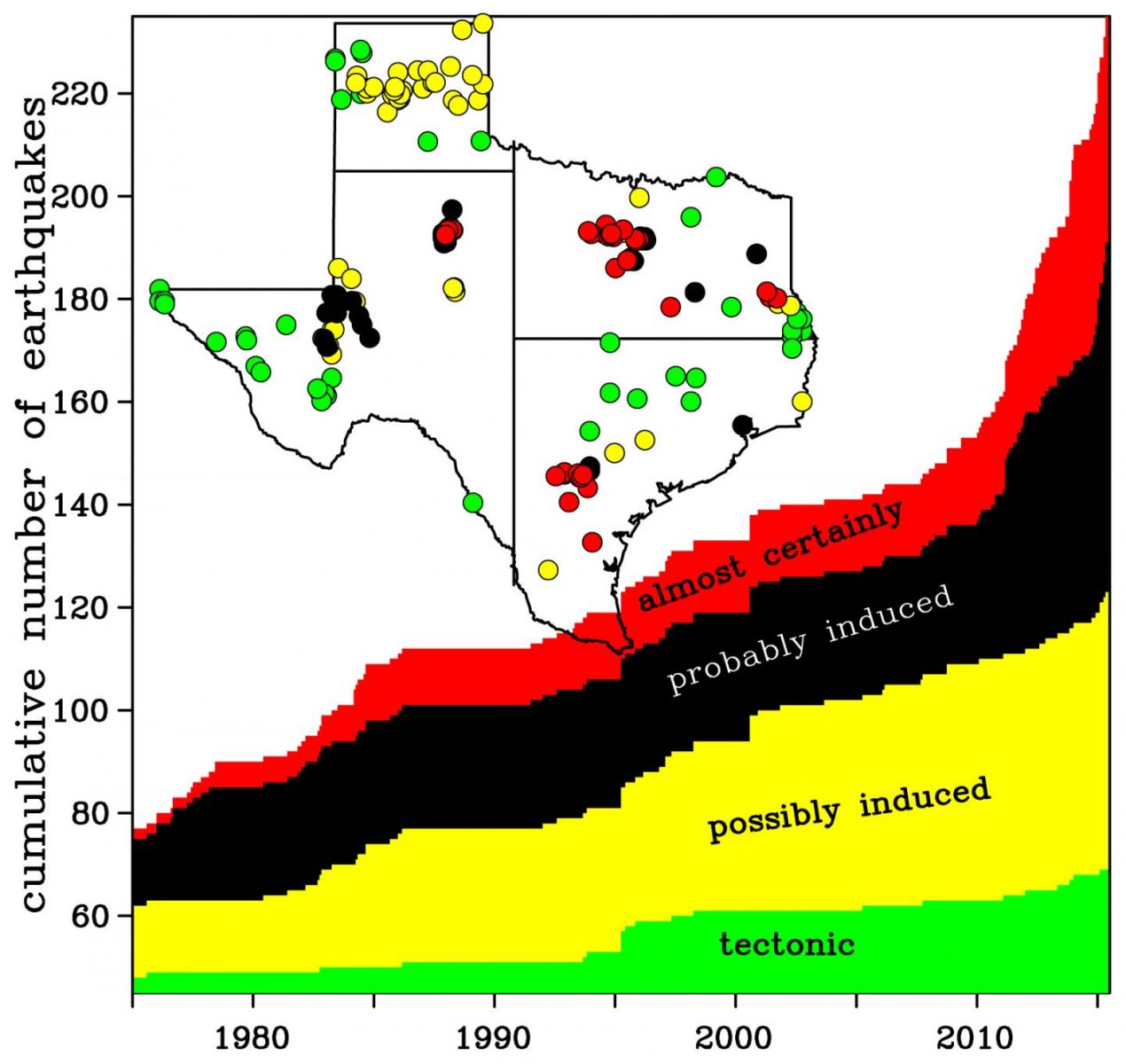 The location and cumulative number of natural (tectonic) and induced earthquakes in Texas between 1980 and 2010. Image credit: Cliff Frohlich/ University of Texas at Austin

In the period between the 1940s and the 1970s, the petroleum operations were more aggressive in trying to drive oil by water flooding, and massive amounts of water pumped underground have strongly contributed to the seismic activity.

Over the last ten years, the oil and gas recovery methods produced large amounts of wastewater, injected back into the ground for disposal, in a process responsible for triggering the nearby quakes. Earthquakes that are connected to this type of activity are usually of M3.0 or lower in Texas, less intense than those in Oklahoma.

These differences may be the results of the types of oil operations in each state. The injection earthquakes reported in Texas take place near the wells with a high injection rate which disposes of wastewater produced during the hydrofracturing operations. On the other hand, the wastewater in the Oklahoma region gets produced during the conventional oil production, and it's injected into a deep underground, underneath the sedimentary rock layers.

To identify human-induced earthquakes in the Texas historical records, the scientists examined how close in space and occurrence timing the quakes were to the petroleum operations, how deep the center of an earthquake is, and if there are known or suspected faults in the vicinity. The quakes happening in relatively shallow regions suggest a human induced trigger.

At present, no earthquakes of M3.0 or higher in Texas have been linked to an explicit hydrofracturing process, or fracking, according to the experts.

In 2015, the Texas legislature funded a program that would install 22 additional seismic monitoring stations to add to the state's existing 17 permanent stations, with the hopes of building out a statewide monitoring network that could provide more consistent and objective data on induced earthquakes.

Featured image: The location and cumulative number of natural (tectonic) and induced earthquakes in Texas between 1980 and 2010. Image credit: Cliff Frohlich/ University of Texas at Austin