Severe storms produced multiple tornadoes across Oklahoma, Nebraska, Iowa and Ilionis on May 9, 2016. In Oklahoma, the storms killed at least 2 people.

A large and extremely dangerous tornado touched down near Wynnewood, south of Oklahoma City, killing an elderly man in his home.

"News 9 Chief Meteorologist David Payne estimates the tornado to be at least an EF-2, or possibly a low end EF-3. Hail the size of tennis balls have also been confirmed. Multiple homes and structures were damaged or destroyed by the tornado, including some mobile homes and barns. Most of the damage was located in the area of Elmore City, Katie and Wynnewood," News 9 reports.

A second, even larger tornado, possibly EF-4, formed to the northwest of Sulphur. 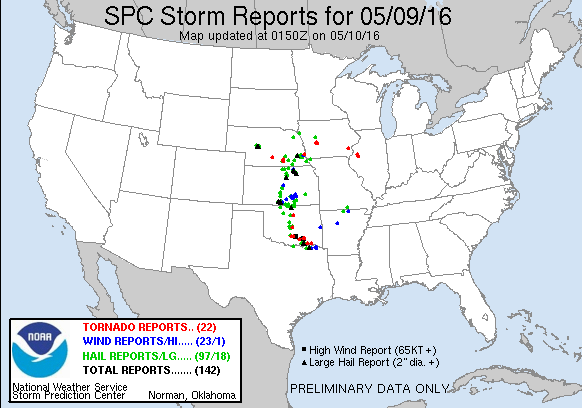 Strong to severe thunderstorms are possible across the Southern and Central Great Plains, and heavy rainfall expected over lower and mid-Mississippi Valley through Tuesday, May 10.

The following videos were recorded in Nebraska.

After wild weather rolled through the Plains, another 14 million people are under the risk of severe weather on Tuesday, May 10.

After wild wx rolled through the #Plains, another 14mil ppl are under the risk of #severewx today. Details on @AMHQ. pic.twitter.com/uVmTPGB3G9