A group of NASA's scientists has managed to answer two important questions about the wobbles observed in our planet's rotation. New insights hold a potential to significantly add to existing knowledge about the Earth's past and future climate.

Earth's spin axis is known to slowly drift around the planet's poles. Since the beginning of observations, our planet has wobbled for about 12 m (37 feet) at its farthest. Although the wobbles don't impact our everyday life, they are quite important in getting reliable measurements from GPS devices, various Earth-observing satellites, and observatories situated on the ground.

Scientists from NASA's Jet Propulsion Laboratory in Pasadena, California, conducted a new study to investigate how the movement of our planet's water contributes to its rotational wobbles. 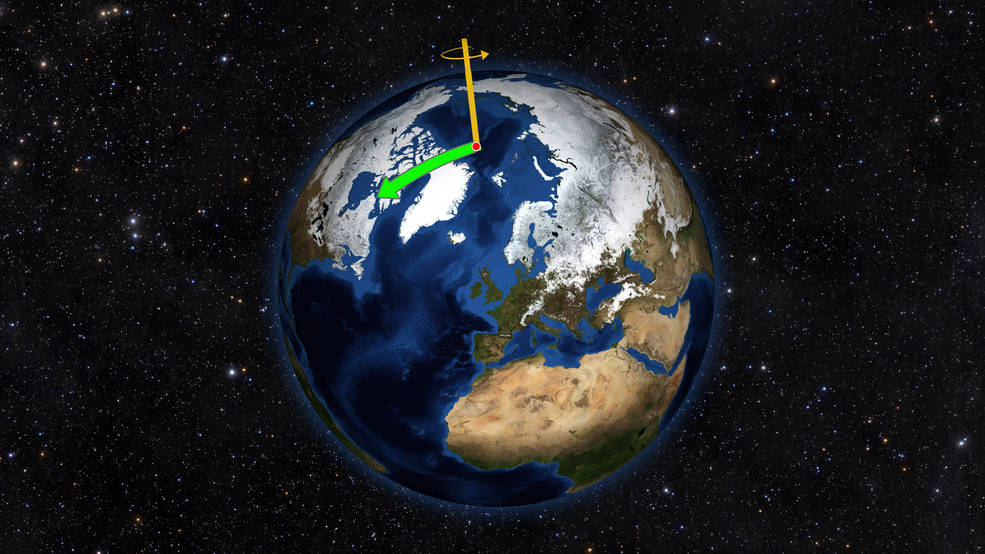 Earth does not always spin on an axis running through its poles. Instead, it wobbles irregularly over time, drifting toward North America throughout most of the 20th Century (green arrow on the image above). That direction has changed drastically due to changes in water mass on Earth.

Older research studies have already been successful in establishing the links between processes unfolding on our planet's surface and interior, and its wobbling. Research conclusions showed that Earth's mantle is still readjusting to the loss of ice in North America following the period of the last ice age, and that the reduced mass underneath the continent is responsible for pulling the spin axis toward Canada, at the rate of a few inches per year. 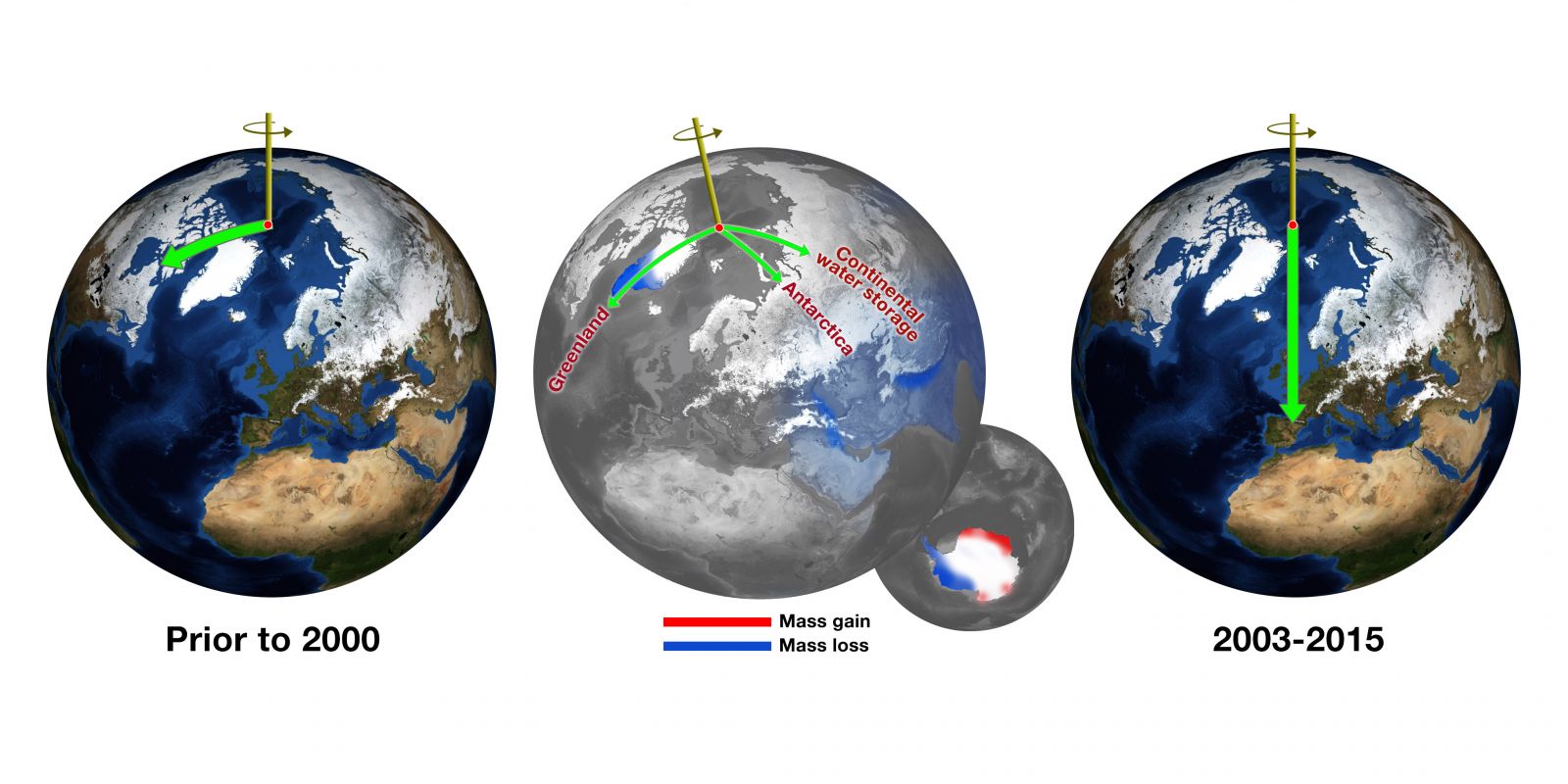 Approximately 16 years ago, our planet's spin axis turned eastward and started drifting twice as fast of its earlier speed, at a rate of 17 cm (7 inches) in a year.

"It's no longer moving toward Hudson Bay, but instead toward the British Isles. That's a massive swing," explained Surendra Adhikari, a JPL scientist involved in the research.

According to the scientists, the loss of mass from Greenland and Antarctica's rapidly melting ice sheet may have triggered the shift of the spin axis. To investigate the idea, researchers used observations from the NASA/German Aerospace Center Gravity Recovery and Climate Experiment (GRACE) satellites, that keep a monthly record of changes occurring in mass around Earth, caused mainly by the water movements such as accumulating snowpack and groundwater depletion. 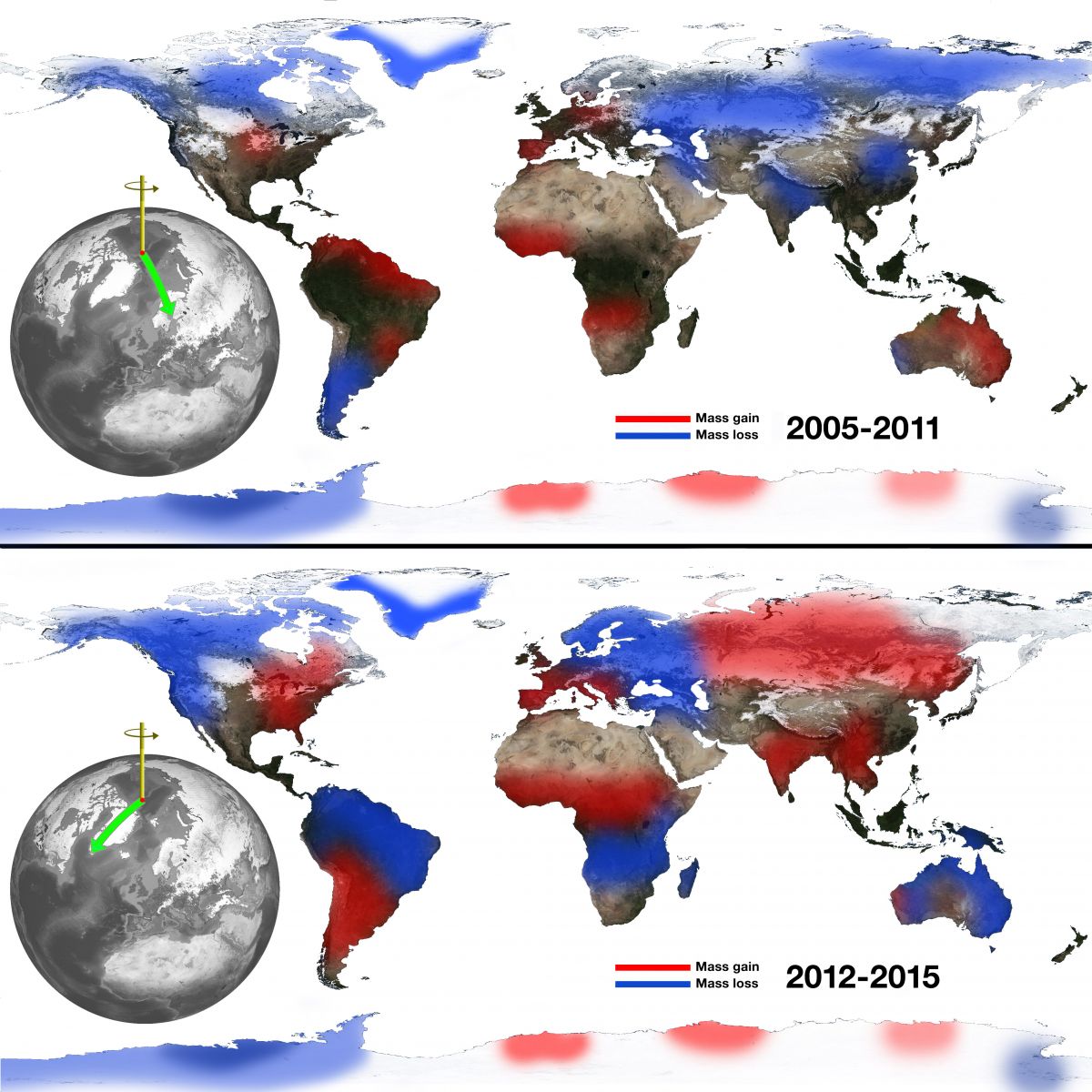 The relationship between continental water mass and the east-west wobble in Earth's spin axis. Losses of water from Eurasia correspond to eastward swings in the general direction of the spin axis (top), and Eurasian gains push the spin axis westward (bottom). Image credit: NASA/JPL-Caltech

The experts calculated how much mass was involved in water cycling between Earth's land areas and its oceans from 2003 to 2015, and the extent to which the mass variations are affecting the planet's spin axis.

According to the results, the large amount of energy required to pull the spin axis to such extents, cannot result only from the changes recorded in Greenland. Not even the combined effect of the ice mass loss from West Antarctica and mass gain in East Antarctica is enough to explain the observed increase in speed and direction.

The conclusion was that something going on east of Greenland is responsible for an additional pull, and the answer was found in Eurasia.

"The bulk of the answer is a deficit of water in Eurasia: the Indian subcontinent and the Caspian Sea area," Adhikari said.

The conclusions came as a surprise, as the loss of water mass in the region in question due to depletion of aquifers and drought, is not large enough to cause the change in the ice sheets. However, the much smaller loss could have had such an effect  because the spin axis is very sensitive to changes occurring around 45 degrees latitude.

"This is well explained in the theory of rotating objects. That's why changes in the Indian subcontinent, for example, are so important," Adhikari said.

While solving this fairly recent mystery, the scientists also figured out a promising new solution to one older wobbling problem in Earth's rotation, which puzzled the researchers since the observations began in 1899.

The spin axis wobbles between approximately 0.5 and 1.5 m (20 to 60 inches) east or west of its general drift direction.

"Despite tremendous theoretical and modeling efforts, no plausible mechanism has been put forward that could explain this enigmatic oscillation," Adhikari explained.

While comparing the graphs of the east-west wobble in the period when the data from GRACE were available with a graph showing changes in continental water storage at the time, the experts noticed how similar they were. The changes in water on land appeared to be strongly connected with the wobble, while the changes in polar ice showed no such connection. Dry years in Eurasia apparently matched the eastward swings, while the wet years matched with the westward swings.

When the researchers input the GRACE observations on changes in land water mass from April 2002 to March 2015 into classic physics equations that predict pole positions, they found that the results matched the observed east-west wobble very closely.

"This is much more than a simple correlation. We have isolated the cause," said Erik Ivins, a co-author of the research.

It turns out, the 115-year record of east-west wobbles in Earth's spin axis could be an excellent record of changes in land water storage.

"That could tell us something about past climate – whether the intensity of drought or wetness has amplified over time, and in which locations," said Adhikari.

"Historical records of polar motion are both globally comprehensive in their sensitivity and extraordinarily accurate. Our study shows that this legacy data set can be used to leverage vital information about changes in continental water storage and ice sheets over time," concluded Ivins.

Featured image: Earth does not always spin on an axis running through its poles. Instead, it wobbles irregularly over time, drifting toward North America throughout most of the 20th Century (green arrow). That direction has changed drastically due to changes in water mass on Earth. Image credit: NASA/JPL-Caltech