A team of scientists from the University of Washington (UW) have devised a new mathematical model for the purpose of explaining and forecasting the Madden-Julian Oscillation (MJO), a huge thunderstorm cluster originating in the waters of tropical Indian and Pacific oceans. The weather phenomena, although much less known than El Nino, has an effect just as powerful on the global weather.

The MJO is a massive system of rainstorms, capable of lasting over one week, and followed by a period of clear skies afterwards. The phenomenon is of cyclical nature, and it repeats approximately every 40 to 50 days.

The quiet period last for about a month which allows the system to rebuild. After several such oscillations, the system enters a quiet phase and can stay inactive for many months. The MJO was discovered during the 1970s.

"Over the Indian Ocean and the Western Pacific – one of the warmest, most moist areas of the planet – there is a colossal cluster of clouds every 40 to 50 days or so. When it’s active, it’s a very strong signal," said Ángel Adames, a UW doctoral student in atmospheric sciences. 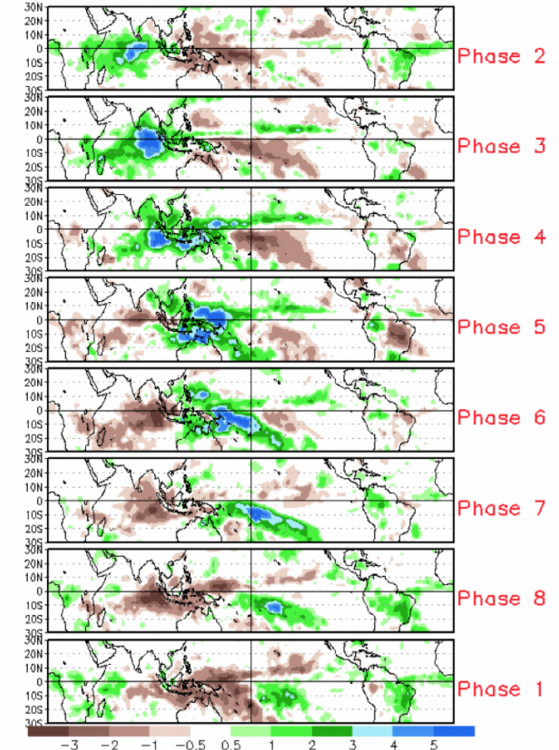 In this average of MJO events from 1979 to 2012, an unusually rainy patch (green and blue) starts in the Indian Ocean and moves east, passing over Indonesia and northern Australia and into the tropical Pacific. Behind comes unusually dry conditions (brown). Image credit: NOAA

"We know what the MJO is doing now, but we have trouble knowing what it’s going to do next."

The MJO strongly affects the weather patterns over India, northern Australia, and Pacific islands, and its understanding would greatly help in predicting tropical rainstorms and flooding across these areas. The system can also enhance the El Niño, which can produce weather patterns capable of affecting the US mainland. Such a situation occurred in January 2016 when both weather patterns were active at the same time.

A theoretical model developed by UW scientists can explain almost all of the fundamental features of the MJO. However, it's still not capable of forecasting the event, as it's an idealized model, the scientists explained.

The model describes three major elements of the MJO: its size, 45-day timescale and why the storm clouds always move toward the east. The model takes into the account the massive amounts of humidity present in the tropics. The MJO creates areas of high humidity which then develop into the large thunderstorm. 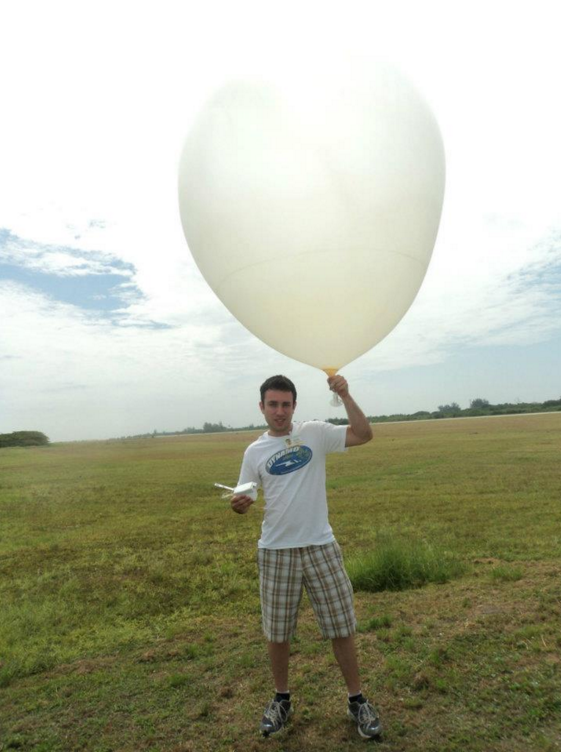 Angel Adames at the DYNAMO field campaign in the Maldive Islands in February 2012. He is holding a research weather balloon and a box that will track temperature, dew point, etc., at different heights. Image credit: University of Washington

"I’m from Puerto Rico, and I can say with certainty that there are fewer contrasts in temperature in the tropics. Another way to drive the weather is by changing the amount of humidity in the atmosphere. This is how the MJO changes weather conditions," Adames said.

When the wave of moisture travels east, it disturbs the atmosphere to its west side, setting everything up for the next rainstorm cluster.

What sets up an MJO in the first place is, however, yet unknown. The oscillation seems to be more active during winter months, but it can disappear for months at a time, nevertheless. Some MJOs reach the Pacific where they strongly influence global weather patterns while others vanish in the Indian Ocean.

Future investigation will be focused on answering those questions and on improving the representation of the MJOs in global climate models.