In August 2010, Indonesia's Sinabung volcano roared back to life with its first eruption in known history. The volcano emitted diffuse white plumes that rose 20 m (65 feet) above the crater and showed signs of increased activity on August 28.

The next day, a second, more powerful, eruption generated an ash plume that rose 2 km (5 561 feet) above the crater. Ashfall and strong sulfur odor was reported in nearby areas. Media reports mentioned the number of evacuated people ranged from 20 000 to 30 000.

Sinabung's first major eruption in known history occurred on September 17, 2013. According to the Darwin VAAC, a pilot observed an ash plume rising to an altitude of 6.1 km (20 000 feet) above the sea level and drifting 55 km (34.2 miles) to the southeast.

Series of eruptions that followed in the months ahead completely changed the landscape around the volcano and the lives of thousands of people living on its slopes.

A powerful new explosion occurred at Mount Sinabung on Tuesday, September 17, sending a plume of ash about 6 km (19 658 feet) into the air. As of Monday, September 16, a total of 6 259 people have been evacuated from surrounding villages. Read more…

Another strong explosion occurred this morning at Indonesian Sinabung volcano. Ash plume was sent to about 9 km (30 000 ft) altitude, according to Darwin VAAC, and drifted westward. The aviation alert level was raised to red. Read more…

Mount Sinabung on highest alert status after 9 powerful eruptions in one day, Indonesia

As of Saturday, November 23, 2013, the activity of Indonesia's Mount Sinabung is on the rise again. 9 strong explosions… Read more…

Indonesian authorities are reporting that activity at Mount Sinabung volcano is still very high. Current eruptive phase started on January 4, when at least 5 pyroclastic flows traveled down on the southeastern side and reached lengths of up to 4 km (2.5 miles). Read more…

On February 1, 2014, several moderately large pyroclastic flows claimed lives of at least 14 people – the first direct victims of volcano's eruption. However, by that time, the ongoing eruptions have already claimed the lives of 31 evacuees, as a result of various illnesses such as breathing difficulties, depression, asthma and hypertension.

Indonesian Mount Sinabung volcano claimed its first victims due to a direct effect of the eruption. At least 14 people were reported killed and 3 others severely burnt by one or two moderately large pyroclastic flows this morning. 3 more people are still reported missing… Read more…

Ever since, the volcano's eruption continues with little changes. Slow lava extrusion at the summit results in occasional small to moderate pyroclastic flows.

PVMBG reported that during December 21 – 28, 2015 inclement weather sometimes prevented visual observations of Sinabung and the growing lava dome in the summit crater. As many as 21 hot avalanches and pyroclastic flows traveled 0.7 – 1.5 km (0.43 – 0.93) ESE, producing ash plumes that rose 1 km (3 280 feet). Ash plumes from explosions rose as high as 3 km (9 842 feet) and drifted E and SW. Seismicity consisted of avalanche and pyroclastic-flow signals, low-frequency and hybrid events, tremor, tectonic events, and volcanic earthquakes. Seismicity fluctuated at high levels, although it had declined compared to the previous week, and indicated lava-dome growth. 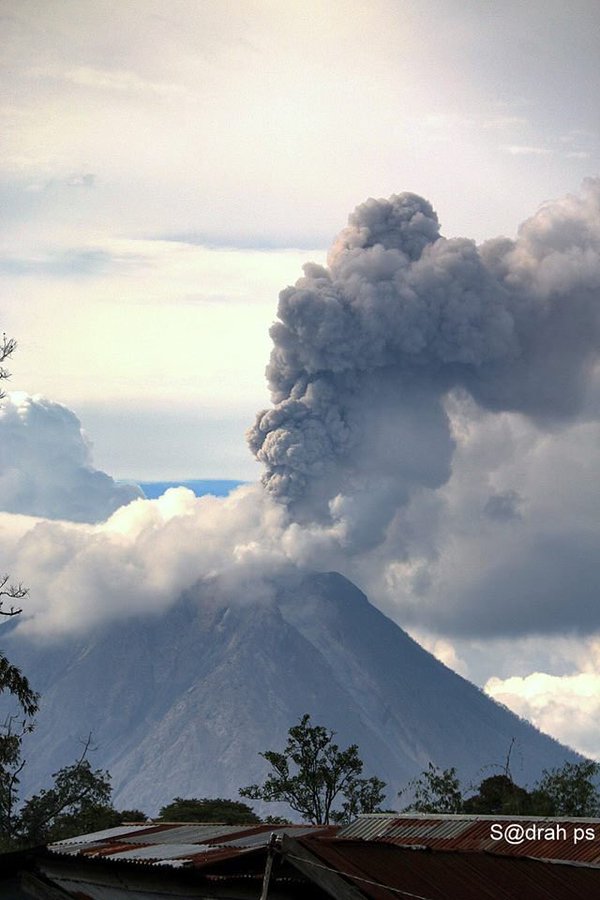