Hot avalanches from the volcano collapsed from the southwestern flank of the lava dome at 02:31 UTC and rising ash plumes drifted about 15 km (9 miles) to the east-southeast of the volcano. The explosive-extrusive eruption continued and ash explosions rising up to 10 km (32 800 feet) are expected to occur at any time. KVERT warns the volcano activity could affect international and low-flying aircraft. 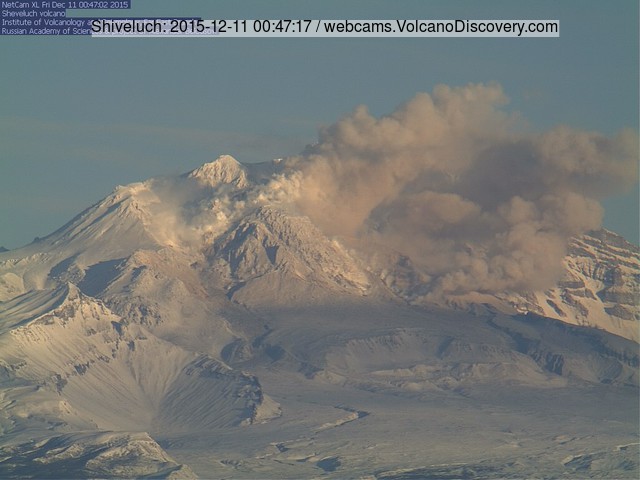 According to Global Volcanism Program (GVP), in the period between December 4 and 11, lava-dome extrusion onto Shiveluch's north flank was accompanied by fumarolic activity, dome incandescence, ash explosions and hot avalanches. A daily and intense thermal anomaly over the dome was detected on satellite images. Ash plumes rose between 4 and 4.5 km (13 100 to 14 800 feet) and drifted 130 km (80.8 miles) on December 4, 6 and 11 while the Aviation Color Code remained orange.

The high, isolated massif of Sheveluch volcano (also spelled Shiveluch) rises above the lowlands NNE of the Kliuchevskaya volcano group. The 1300 cu km (312 cu miles) volcano is one of Kamchatka's largest and most active volcanic structures. The summit of roughly 65 000-year-old Stary Shiveluch is truncated by a broad 9 km (5.6 miles) wide late-Pleistocene caldera breached to the south. Many lava domes dot its outer flanks. The Molodoy Shiveluch lava dome complex was constructed during the Holocene within the large horseshoe-shaped caldera; Holocene lava dome extrusion also took place on the flanks of Stary Shiveluch.