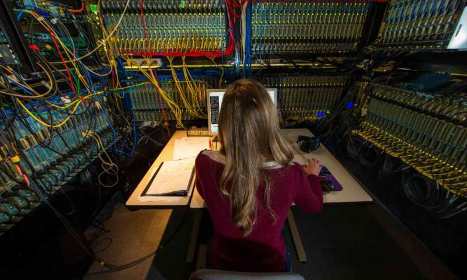 Scientists from Australian National University (ANU) have discovered that the temperature in the lower mantle varies much more than previously thought.

Lower mantle, which lies 3 000 km (1 864 miles) below the Earth's crust, has greater temperature differences in regional variations than previously thought, specifically where lower mantle meets the outer core. The recent discovery will help explain the structure of the Earth and the story of how it formed.

"Where the mantle meets the core is a more dramatic boundary than the surface of the Earth," said the lead researcher Hrvoje Tkalčić, a geophysicist in ANU Research School of Earth Sciences.

"The contrast between the solid mantle and the liquid core is greater than the air. The core is like a planet within a planet. The centre of the Earth is harder to study than the center of the Sun," said Tkalčić.

Temperatures in lower mantle can reach up to 3 500 degrees Celsius (6 332 degrees Fahrenheit) and the barometer showed about 125 gigapascals of pressure, which is about 1.25 million times greater the pressure of the atmosphere. The temperature variations with other material properties have an effect on the speed at which the waves travel in Earth's deeper layers.

The team took and examined the data from more than 4 000 seismometer measurements of earthquakes across the globe.

They ran a complex mathematical process, similar to CT scan, to unravel the data and build the most detailed global map of the lower mantle, showing features ranging from as large as the entire hemisphere down to 400 km (248 miles) across.

The map showed that seismic speeds varied more than expected and were probably driven by heat transfer across the core-mantle boundary, including radioactivity.

"These images will help us understand how convection connects the Earth's surface with the bottom of the mantle. These thermal variations also have profound implication for the geodynamo in the core, which creates the Earth's magnetic field," Tkalčić said.